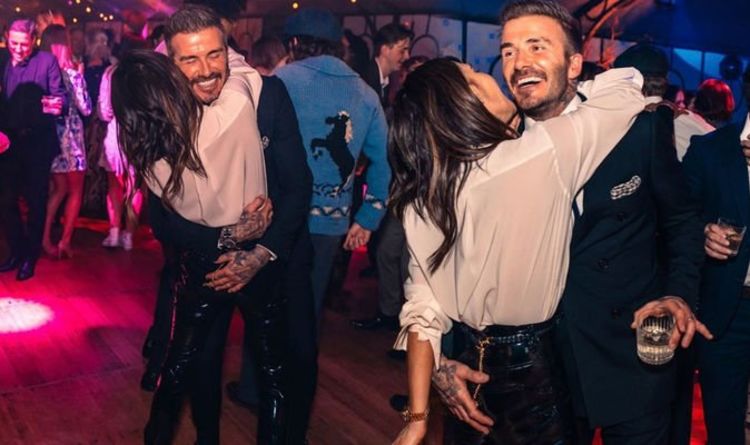 Victoria Beckham, 45, took to Instagram this afternoon to share some pictures from her son’s 21st birthday bash.

The fashion designer could be seen with her arms wrapped around her husband David Beckham, 44, in a cosy embrace on the dance floor, in snaps which were posted online.

David and Victoria packed on the PDA at a party for their eldest son Brooklyn Beckham, which took place at their Cotswold home last night.

In the pictures, which the mum-of-four shared with her 28 million followers, Victoria could be seen in crisp white shirt and sexy pair of PVC trousers.

Her husband of 20 years was also dressed to impress for the big bash in a navy blue suit.

According to her post, the former Spice Girl partied with her family until 6am.

The photographs captured the loved-up couple dancing together, with one image showing David with his hand on his wife’s behind.

Victoria, who is also mum to Romeo, 17, Cruz, 15, and Harper, eight, captioned her post: “Dancing till 6am! Kisses and happy 21st birthday @brooklynbeckham X.”

She went on to say: “I love u so much @davidbeckham x.”

Instagram users and fans took to the comments section to share their thoughts on the cosy snap.

DJ Fat Tony – who performed a set at the party – wrote: “Love this,” while Brooklyn’s girlfriend Nicola Peltz, 25, posted three heart-eye emojis next to the picture.

And a fourth added: “So awesome partying with ya kids.”(sic)