‘Viewers will get tired of another season’: Trump and governors... 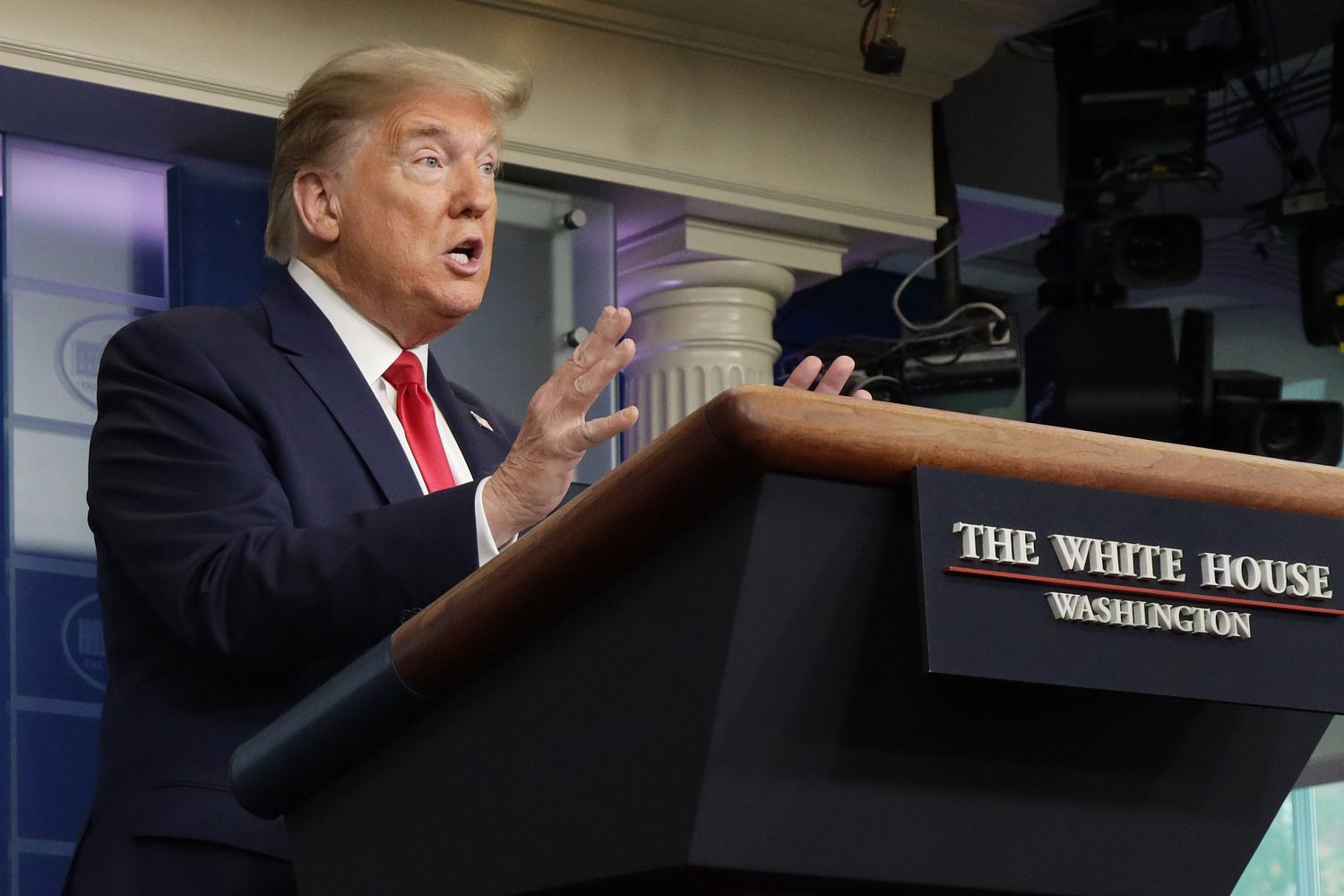 President Donald Trump and many governors are heralding a reopening of the American economy — even though a majority of states ending their coronavirus shutdowns this week have not met the White House’s most basic thresholds for testing, tracing and a prolonged drop in new cases.

The White House has tried to distance itself from governors’ actions by insisting its reopening guidelines are merely suggestions, not the rule of law. But Trump is latching himself onto the message that America is ready to reopen, traveling on Tuesday to Arizona — one of the states not yet meeting all of the administration’s criteria — to visit a Honeywell plant and promote the reopening of huge swaths of the nation.

Trump in recent days has pivoted his attention squarely to the U.S. economy, even as he revised upward his own expectations for the death toll caused by Covid-19. On Monday, a coronavirus model closely watched by the White House also moved upward, projecting roughly 134,000 deaths by August — a near doubling of its forecast, prompted by states’ rush to lift restrictions.

“There’s this mindset that it’s like running a show and you’ve got to keep people tuned in, you’ve got to keep them interested and at some point you’ve got to move on and move on quickly,” said a former senior official at the Health and Human Services Department. “Viewers will get tired of another season of coronavirus.”

The president, conservative economists, political activists and some governors have argued the economy cannot remain shuttered any longer, given the damage from soaring unemployment and collapsing economic output.

“The reality is we can’t stop the coronavirus,” Iowa’s Republican governor, Kim Reynolds, told reporters Monday. “It’s going to remain in our communities until we have a vaccine available. So, we have to learn to live with it without letting it govern our life.”

Trump’s own health advisers have expressed skepticism about some of the reopening plans at businesses like hair salons or spas. Some are simply urging Americans to stay six feet apart this summer and avoid large gatherings as the virus continues to spread, with no clear timeline for a cure. Other public health experts warn that restarting businesses across the nation now could undo the good caused by weeks of social distancing.

Dr. Michael Mina, an epidemiologist at Harvard’s School of Public Health, warned of repeating an earlier cycle of the outbreak by opening up too quickly while the disease continues spreading through thousands of transmission chains. “As each of those communities begin to open up, we won’t have sufficient herd immunity for anything different to happen from what we saw in January or February,“ Mina said.

“What that means is as things open up, any one of those transmission chains or thousands of them could potentially ignite new outbreaks,” Mina said. “That’s how a second wave can potentially be more disruptive, more damaging and larger than the initial phase of the epidemic.”

The White House guidelines recommend that states only begin to reopen once they show a downward trend in positive tests or a downward trend in new cases over a two-week period
— with hospitals able to treat all cases, without being in crisis mode. The same guidelines also call on states to set up testing sites for all residents with symptoms and be able to trace the contacts of those infected.

The criteria are being met by a small number of states — those with low numbers and downward trends for two weeks. “Those would ideally be a good pilot or early test beds for reopening,” said Tom Inglesby, director of the Center for Health Security at Johns Hopkins University. “But in many other places, the numbers are so high that it will be difficult for them to do contact tracing or case management. The chances of them being able to isolate and contain cases and track contacts seems low.”

Trump will travel to Arizona on Tuesday for his first public appearance outside the White House since late March. There’s no evidence within the Arizona data to suggest the state has met his White House’s recommendations.

Models from Arizona State University show the state’s hospital use isn’t expected to peak until later this month, and the last two consecutive Mondays in late April showed large spikes in cases, according to the state health department.

Arizona Gov. Doug Ducey last week announced that retail businesses could open Monday if they sell goods outside the store or have customers make an appointment to ensure social distancing measures are in place. On Monday, he announced that barbers and cosmetologists can open Friday, and restaurants and coffee shops can resume limited dine-in service next Monday.

The governor said the infection and hospitalization numbers are trending in the right direction and he is working on ramping up testing and contact tracing. That’s given him confidence to tell people to go out as long as they are careful. “Get your hair cut, get something to eat and head home,“ he said Monday. “That’s where it‘s safest.”

Tucson Mayor Regina Romero, one of three mayors who released a statement last week saying they would have preferred that Ducey not change his stay-at-home order, said she was concerned that Arizona moved too quickly because it had not satisfied the administration’s guidelines.

“We don’t want to see a spike in cases because of a relaxation of the stay-at-home order,” she said. “We wanted to err on the side of being much more careful. … If you open up too quickly, there could be a spike in cases, then you have to take three or four steps back and that will take a longer time.”

Arizona does not yet have the testing or contact tracing necessary, she said. “We need to ramp it up so we know the true amount of spread in Arizona so we can make an informed decision.” Ducey’s office did not respond to a request for comment.

The White House’s criteria also call on states to have the ability to trace the contact of newly infected people. Many of the states moving to reopen, including Texas, Georgia and Florida, are still ramping up their contact-tracing programs, and most won’t ever have the number that public health experts say is sufficient.

A top Georgia public health official acknowledged last week that Georgia did not meet every one of the White House standards.

“But we met several of them … which made us feel that it would be safe to move forward because we had three things in place: We had adequate hospitalization, hospital capacity and had really augmented that considerably,” said Kathleen Toomey, Georgia’s health secretary.

Three White House officials said the administration’s guidelines were suggestions. Governors should issue their own directives — with the White House continuing to help the states with testing and tracing, one official said.

“President Trump has provided governors data-driven, safe guidelines to open up America again,” said White House deputy press secretary Judd Deere. “Getting the American people back to work, back to sporting events, back to churches, back to restaurants, and doing so safely is the President’s shared goal with state and local leaders. The health of the American people remains the top priority across all levels of government, and the White House continues to monitor the efforts by states to ease restrictions.”

The former HHS official characterized Trump’s nudge to reopen the economy as a “moral” victory rather than a major tangible one, since there’s no guarantee this is going to pay off with an economic recovery.

Even if the president and several governors applaud the reopening of their parks and hair salons, that does not mean consumers will follow their lead — potentially making their victory seem hollow, given the health risks.

“People are not going to jump and go to the restaurants and movie theaters immediately,” the former health official said. “That’s not going to happen.”