The lava flow on the northeast side of the volcano is now 700 metres long, although with Pacaya being more than 2,500 metres tall, it is still far from the bottom. Lava started pouring from the mouth on Sunday, June 7 and has been slowly erupting since. According to Guatemala’s Instituto Nacional de Sismología (INSIVUMEH), white and blue gas are coming from the mouth of the volcano, which first erupted 23,000 years ago.

Website Volcano Discovery said: “A satellite image from 8 June shows a formation of lava flow on the north flank, currently about 550 m long.

“INSIVUMEH reported that the lava flow on the northeast flank remains active and it has been increasing in length, currently about 700 m long.

“Strombolian activity continues to be observed from the Mackenney summit crater with incandescent material thrown to an approx. height of 50-100 meters.

“In addition, white and blue gas and steam plumes are emitted. The plumes were dispersed towards the south and southwest direction. 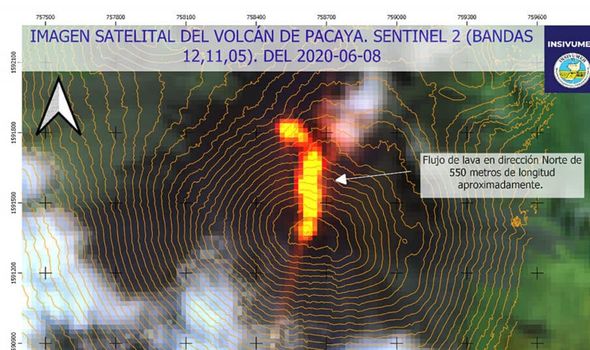 “INSIVUMEH reported that the lava flow on the northeast flank remains active and it has been increasing in length, currently about 700 m long.” (Image: INSIVUMEH)

The nearby El Fuego is Guatemala’s most dangerous volcano, and its most recent eruption cycle began in 2002.

The volcano made headlines in 2018 when it violently erupted with little warning.

On June 3, 2018, the volcano sent ash rocketing nearly four miles above its summit and generated a super-heated pyroclastic flow which cascaded down the mountain and into local communities. 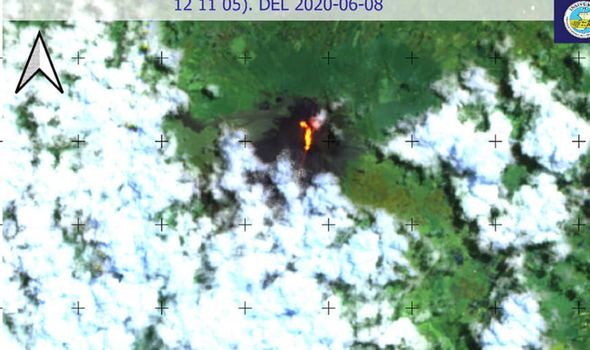 Some 200 people are thought to have died in the chaos, as the sudden nature of the eruption left little time for evacuation.

Guatemala, much like many South American countries, is seismically active with earthquakes and volcanoes as it sits on top of the Ring of Fire.

The Ring of Fire is the largest and most active fault line in the world, stretching from New Zealand, around the east coast of Asia, over to Canada and the USA and all the way down to the southern tip of South America and causes more than 90 percent of the world’s earthquakes.

The plates which make up the Ring of Fire are so huge even the slightest shift results in massive tremors, volcano activity and tsunamis.

In total, 452 volcanoes sit upon the Ring of Fire and seismologists state it is impossible to predict when a volcano will erupt.