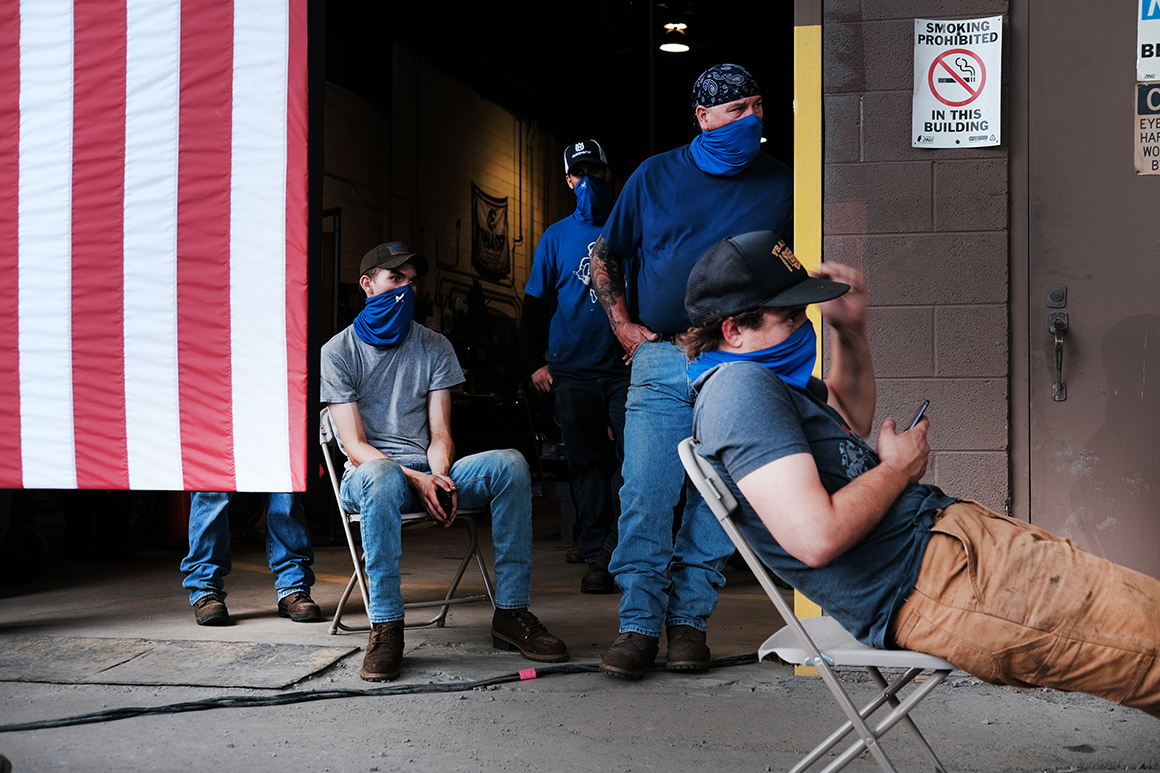 Soon, vote tallies will show whether all those decades of schmoozing have paid off. Public polling in Pennsylvania gives Biden an edge, while voter registration trends in the state have been favorable to Republicans. Biden’s ability to run up the score in Scranton, part of Lackawanna County, and cut into Trump’s 2016 margins in neighboring Luzerne county, or even flip it, will be critical to his statewide fortunes.

Like other Trump backers here, Pane — who recently appeared in an ad for the pro-Trump super PAC America First Action — said support for Trump in Scranton was less overt than it was for the hometown candidate, but he spoke of a “huge silent majority.”

In this overwhelmingly white county, Black Lives Matter yard signs are a rarity, far outnumbered by signs of support for local police departments, which share lawns with both Trump and Biden signs.

On North Washington Avenue in the Green Ridge section of town, on the block that Biden grew up, pro-Biden signage, including “Scranton Loves Joe!” signs, far outstrips visible support for Trump.

Some in town, though, who are not lifelong Scrantonians, are not even aware of the connection. Despite living in the area for about 20 years, Alejandro Caraballo, a 45-year-old subcontractor at work on a house across the street from Biden’s childhood home, said he was unaware that Scranton was Biden’s hometown. “Actually, I heard Trump was from here but I knew it was a lie,” said Carabello, a Trump supporter, citing the real estate mogul’s well-known New York upbringing.

As if to clear up any misunderstanding, the Times Tribune weighed in in August with a front page declaring, “THE ROOTS ARE REAL,” featuring testimony from locals who have stayed in touch.

Biden’s late mother, Jean Finnegan Biden, had Scranton roots stretching back to the 19th century, and several relatives remaining in the area buttress those ties. Despite a report that Biden’s Scranton relatives had gone for Trump in 2016, cousin Ambrose Finnegan, who now lives outside of Philadelphia, said his relatives have all continued to support Democrats, and are all in on their cousin’s White House bid. “He’s always made a sincere effort to touch base with his family whenever he’s in Scranton,” Finnegan said.

Over at Finnegan’s Irish Rock Club, a grungy dive bar in a section of town dominated by car dealerships, the sentiment is different.

“Dude, he left here when he was eight,” said proprietor Kevin Locker, rounding down. “He likes to come back to the area for show.” (It turns out the bar’s name is not an homage to Biden’s maternal line, but instead to Locker’s three-year-old “chiweenie,” a cross between a chihuahua and a dachshund.)

At Backyard Ale House, Whalen said he found Biden’s invocations of Scranton eye roll-inducing. “You spent six months here when you were a kid,” he said, rounding way down.

Whalen said patrons at his bar, as well as friends he has seen posting on Facebook, have taken to playing a drinking game during debates and town halls that calls for them to take a swig every time the former vice president mentions his hometown.

A Republican who voted for Gary Johnson in 2016, Whalen said he will hold his nose and vote for Biden anyway. Whalen said he blamed Trump for the summer’s nationwide unrest, another hint of the incumbent’s problems with the white working class here. “He tear gassed his own people,” Whalen said, referring to a June incident in which law enforcement sprayed protesters outside the White House to clear the way for Trump to walk to a photo opportunity at a nearby church.

At Cooper’s Seafood — a campy local institution that is shaped like a lighthouse, with a giant octopus on its roof — bartender Tommy Lin, 45, said attitudes towards Biden’s Scranton roots tend to break along generational lines. “My older customers, there’s definitely a sense of pride,” he said. “Anybody 50 or under seems to be more aloof of it.”

Delaney, a 24-year-old patron who declined to provide her last name, drove home the point. “I feel like no one even really counts him as being from here,” she said.

The seafood joint plays up a less polarizing claim to fame, with decor nodding to the Scranton-based sitcom “The Office,” featuring clueless boss Michael Scott and his eccentric underling, Dwight Schrute.

The electronic sign in the restaurant’s parking lot, at least, acknowledged the local angle to the impending vote. It even offered an endorsement: “Scott/Schrute ’20”