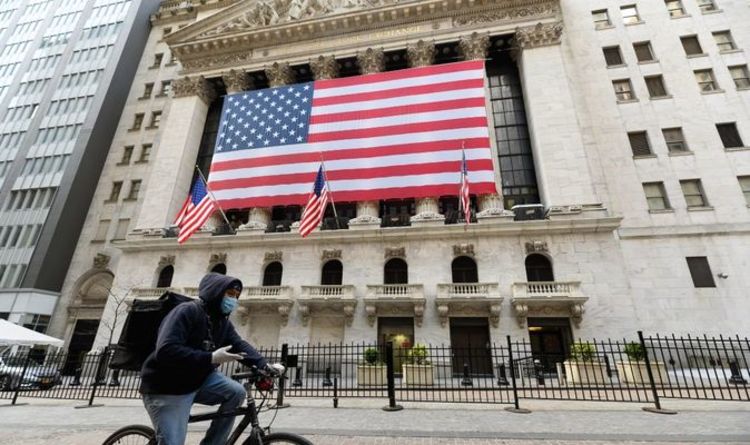 US stock index futures jumped on Friday amid reports patients with severe symptoms of coronavirus had responded positively to Gilead Sciences’ experimental drug, remdesivir. Gilead Sciences shares surged 11.9 percent in premarket trading after it was reported a study at the University of Chicago Medicine had revealed rapid recoveries in almost all of the more than a hundred severely ill patients with COVID-19.

Kathleen Mullane, an infectious disease specialist leading the trials of the drug, said: “The best news is that most of our patients have already been discharged, which is great. We’ve only had two patients perish,” according to Stat news.

Ms Mullane said after starting the drug, patients reported their fevers reducing, while some came off of ventilators the next day and most did not need the full course of drugs for 10 days.

But Ms Mullane said it was hard to draw conclusions because the trial for the most seriously ill patients does not include a control group, which is given a placebo.

But she said that after starting the drug, many patients saw their fevers reduce.

World stock markets made a super-charged sprint towards a second straight week of gains on Friday after President Donald Trump laid out plans to gradually reopen the coronavirus-hit US economy following similar moves elsewhere.

Boeing Co soared nine percent on plans to resume commercial airplane production next week in Washington state after suspending operations last month due to the pandemic.

While markets in Tokyo and Seoul surged three percent as Asia took a widely-expected slump in Chinese GDP data in its stride.

READ MORE: Sign our petition to give Captain Tom Moore a knighthood

But Gilead Sciences urged for caution, saying: “We understand the urgent need for a COVID-19 treatment and the resulting interest in data on our investigational antiviral drug remdesivir.

“The totality of the data need to be analysed in order to draw any conclusions from the trial.

“Anecdotal reports, while encouraging, do not provide the statistical power necessary to determine the safety and efficacy profile of remdesivir as a treatment for COVID-19.

“We expect the data from our phase 3 study in patients with severe COVID-19 infection to be available at the end of this month, and additional data from other studies to become available in May.”

The benchmark S&P 500 ended on Thursday slightly higher as demand for online streaming services and home delivery of goods during the stay-at-home restrictions powered Amazon.com and Netflix to record highs.

The index has now rallied about 28 percent from a March trough following a raft of global stimulus and on hopes the shutdown would be eased with signs of a plateauing in new coronavirus cases.

Late on Thursday, Mr Trump announced new guidelines to re-open the economy in a staggered, three-stage process, but the plan was a set of recommendations rather than orders and left the decision largely up to state governors.