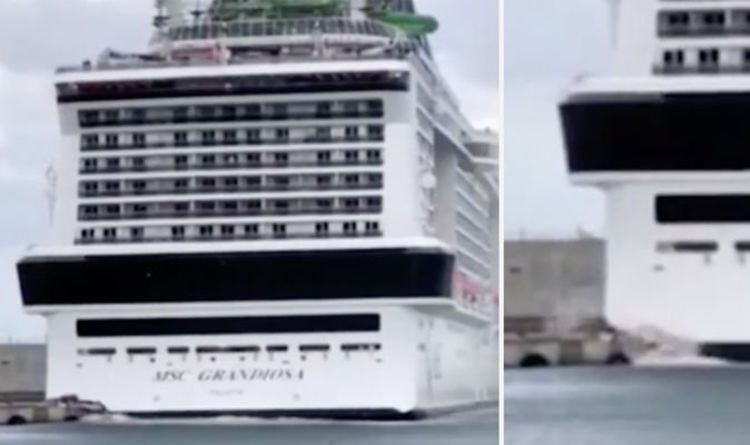 A multimillion-pound cruise ship dramatically crashed into a dock in Sicily just one month into its maiden voyage. The MSC Grandiosa smashed into the concrete wall, taking a chunk out of the dock and leaving the stern of the vessel damaged. The £650 million ship was on one of its Mediterranean cruises and had passengers on board.

The accident took place at around 8:30am on 30 December and was captured on camera.

Footage shows the ship appearing to slowly turn as it tried to dock.

At first, the vessel appears to be in position, however, just moments later a huge chunk is taken out of the wall as the boat continued to turn.

Reports state that the incident took place during high winds, which forced the ship slightly off path.

A spokesperson for MSC Cruises told Express.co.uk: “On 30 December, around 09:30am CET, MSC Grandiosa experienced a light allision in the port of Palermo. Due to reasons we are still investigating, the ship deviated while manoeuvring along the quayside and lightly grazed the end of the quay with its aft part.

“While this may have been noticed by some passengers or bystanders, there was never any risk for guests or crew on board, and there was no impact for the environment.