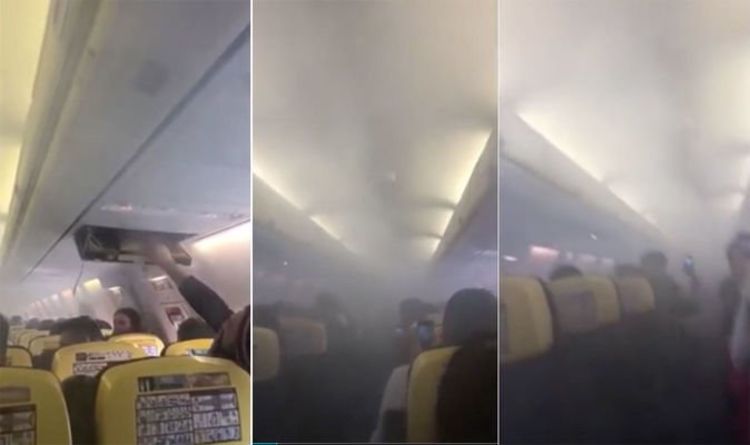 Passengers on a Ryanair flight were terrified when the aircraft rapidly filled with smoke at 5,000 feet in the air. The flight, travelling from Romania to Stansted, ran into danger just minutes into the flight forcing the captain to issue a Mayday. The aircraft then made an emergency landing.

A spokesperson for Ryanair told Express.co.uk: “This flight from Bucharest to London (21 Jan) was delayed due to a minor technical issue with aircraft. To minimise the delay, customers boarded a replacement aircraft which was de-iced before it departed to London. Shortly after take-off, the aircraft returned to Bucharest as a precaution after the cabin crew reported an unidentified smoke in the cabin (which we believe was caused by the de-icing fluid being ingested through the air conditioning system).

“The crew notified local ATC and the aircraft landed normally at Bucharest, where it is being inspected by Ryanair engineers. Refreshment vouchers were provided, and passengers boarded another replacement aircraft which departed for London Stansted shortly after. Ryanair sincerely apologised to affected customers for this delay.”

The airline did arrange for a third plane to carry the passengers home.

However, reports state that of the 169 on board, 29 were reportedly so traumatised by the event that they refused to travel.

The replacement flight arrived in Stansted without further incident.

A second video circulated online recently of a similarly terrifying situation in Russia.

Passengers were travelling on board S7 flight from Tolmachevo airport in Novosibirsk, Russia, when the plane’s engine burst into flames.

Concerned passengers said they heard the engine making a popping sound before igniting as the plane was at the start of the runway.

The engine fire reportedly took place around 1am local time on Saturday. According to Russian media outlet RT, “the pilot tried to start the engine multiple times until the right engine burst into flames.”