We Asked Americans How They Feel About The U.S. Flag. It Got Interesting. 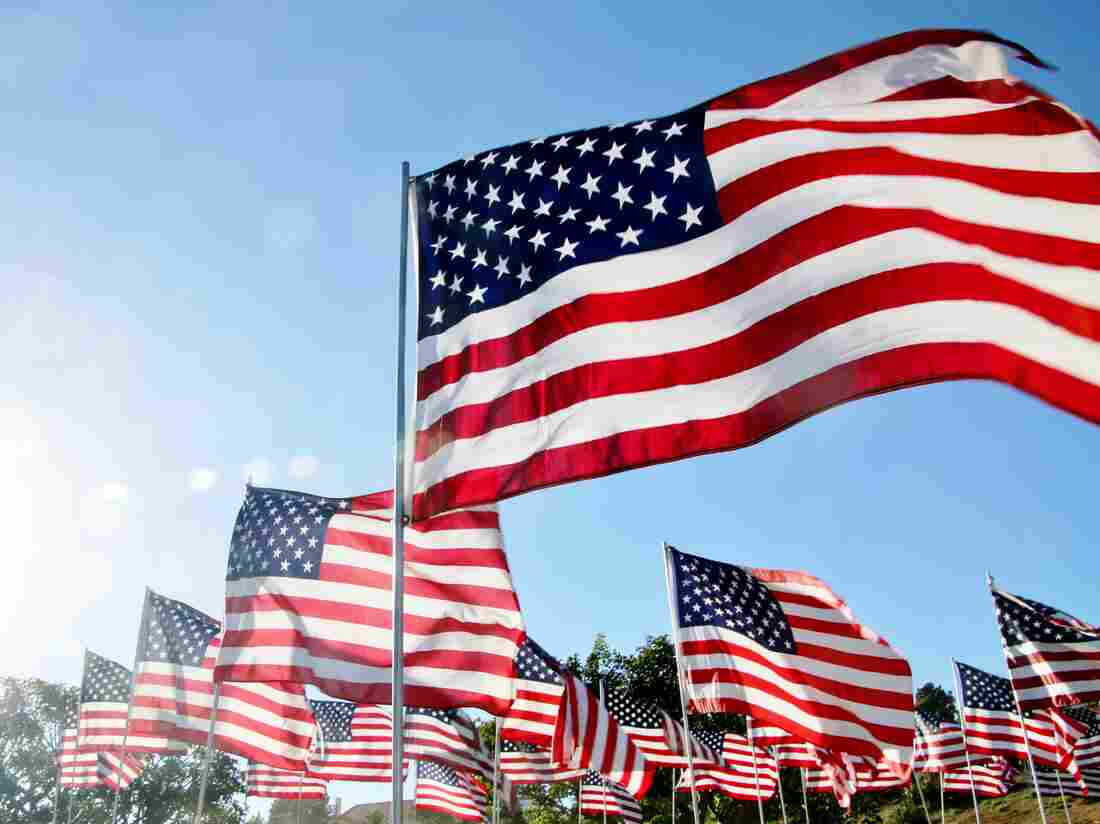 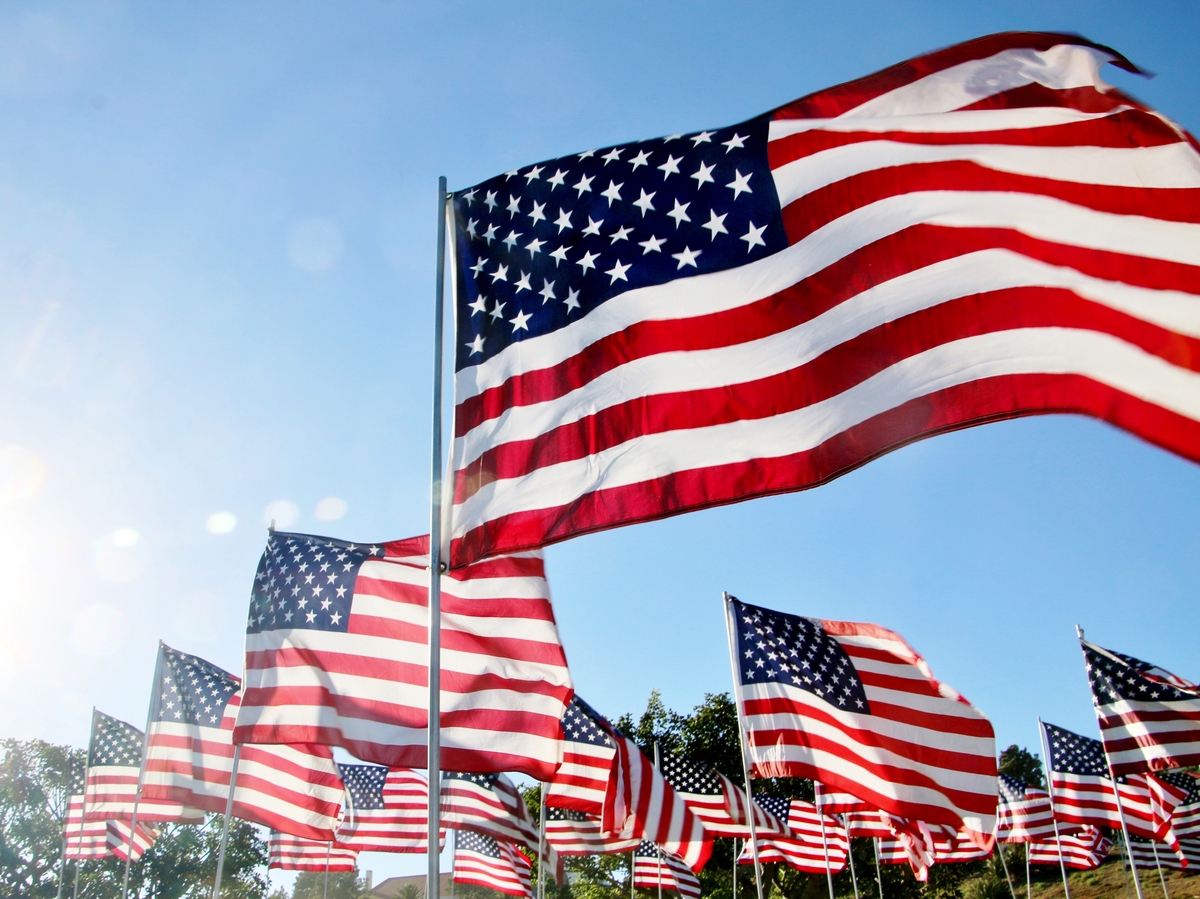 How do Americans feel about the U.S. flag? It’s complicated.

On a fall afternoon, Mark Hurley, a retired Army and Marine veteran, was doing chores in his yard in Bennington, Vt. Hurley has two American flags flying in front of his home.

“It means tons to me,” he said. “Regardless of what your opinion is on life, we are Americans we should be proud of that over everything.”

Hurley, who is white and leans conservative, told NPR he sees the flag as something sacred, a symbol you salute, not a symbol you question. He worries his kind of patriotism is being eroded these days, in part because so many people are focused on issues of race.

“Let’s talk slavery first. That happened two or three hundred years ago,” Hurley said. “We should forget that, be beyond that. To me, as long as people are calling themselves African Americans or Jewish Americans, they’re allowing the racism. They should be saying they’re Americans, period.”

This summer, the country’s long struggle with systemic racism erupted, with hundreds of thousands of people taking to the streets. When NPR asked Americans to share their thoughts about the U.S. flag and what it means to them right now, questions of race and identity came up again and again.

Many white Americans who described themselves as more conservative said they still see the U.S. flag as fairly simple and unifying.

“I think it’s a symbol of the shared values and ideals of the United States,” said Erin Doughtie, a white woman who works for a seed company in Clovis, Calif. 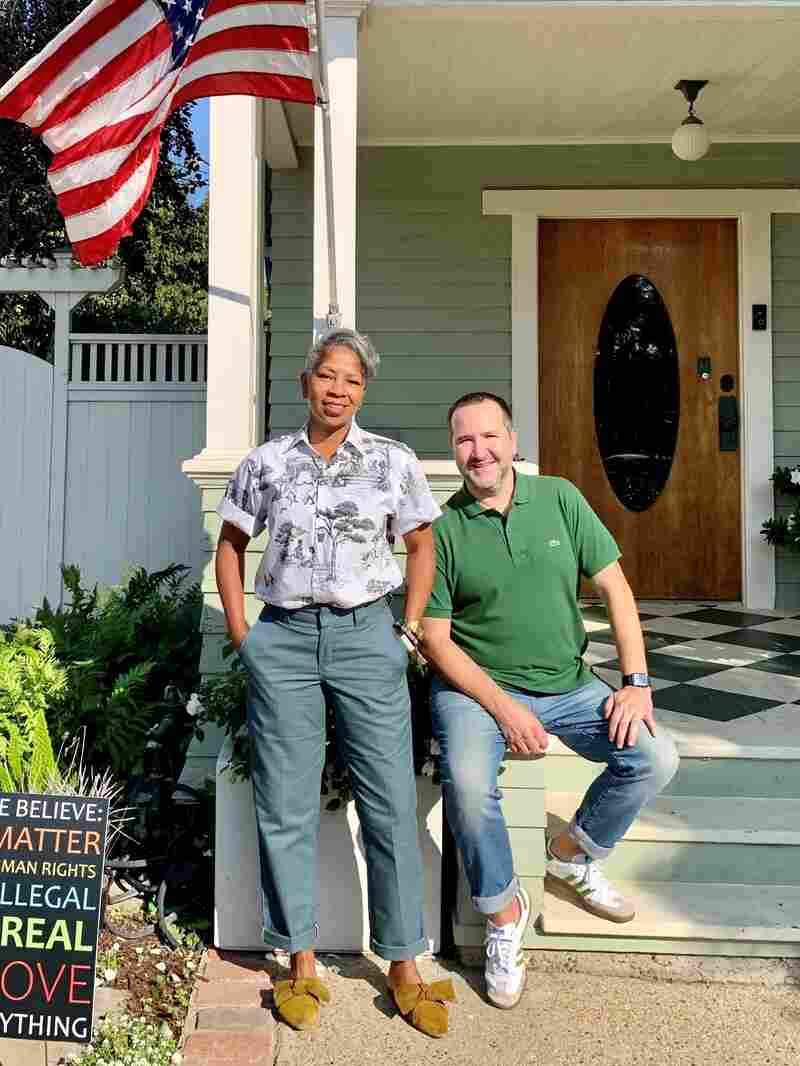 Courtesy of Denise and Kevin Lopez 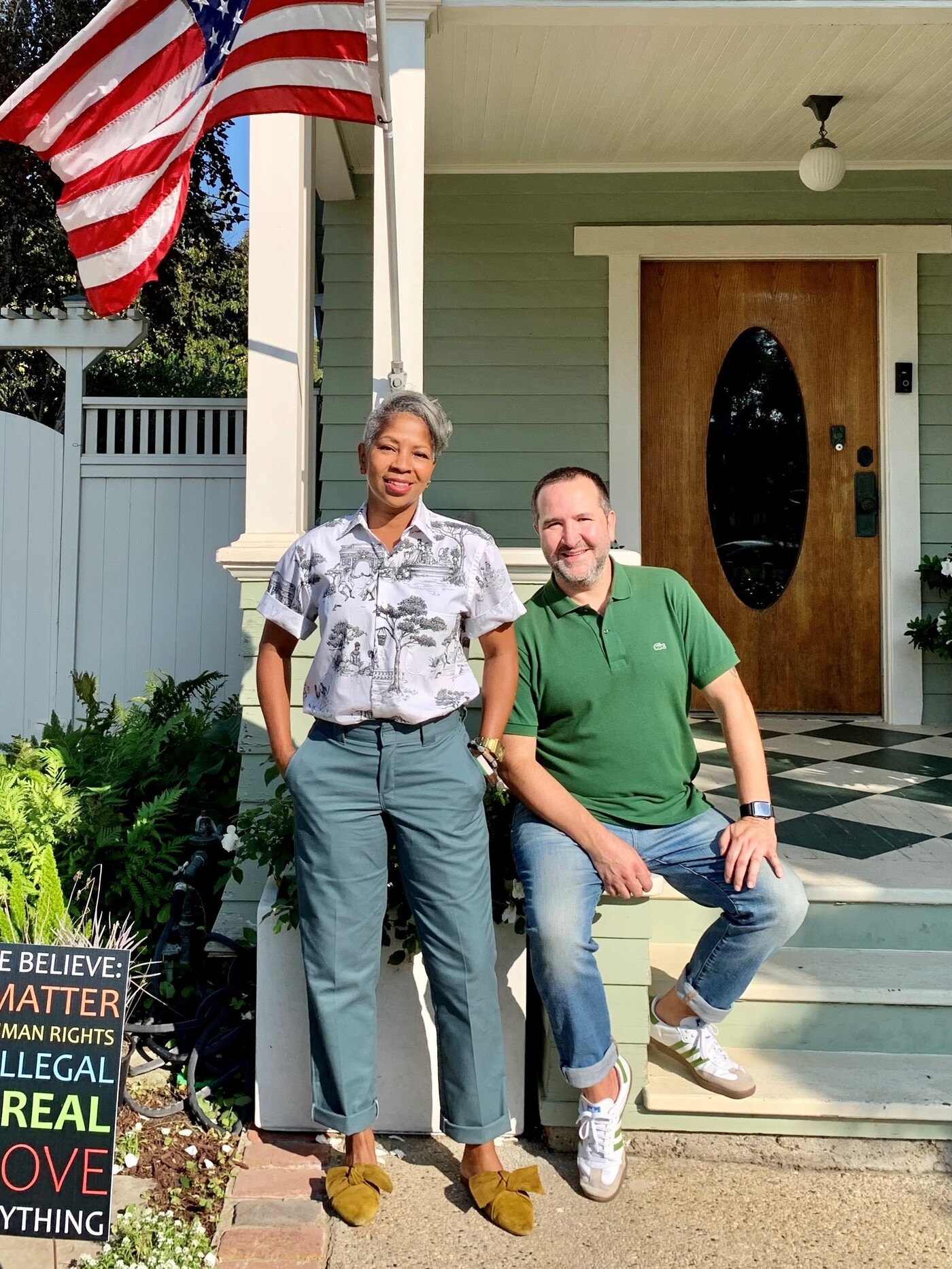 Denise and Kevin Lopez took their U.S. flag down for a time but after a family discussion put it up again outside their home.

Courtesy of Denise and Kevin Lopez

Like Hurley, she voiced impatience with people who see the flag as a symbol burdened by racism: “The United States is still pretty much the most equal place you could have for people of different backgrounds. For people to compare the U.S. to an ideal is unfair.”

But many of the roughly 1,800 people who responded to NPR’s call out, especially people of color and those who lean more liberal, said it’s not that simple. They told us the American flag comes with baggage that can’t be ignored.

“With all the protests and the Black Lives Matter stuff happening, we took the flag down for a little bit,” said Kevin Lopez, who works for Microsoft in San Pedro, Calif.

This summer, Lopez said, events like George Floyd’s death in police custody shook their family. Kevin has Mexican and Irish heritage, his wife Denise is Black.

“It was pretty disheartening for a little while, with the way our people we’re being treated,” he said, explaining their decision to pull down the flag.

“And then Denise was the one who brought it up and said I want to revisit this. We had a family discussion about it.”

After some soul-searching, the Lopez’s decided to raise the flag again. But for them questions of racial justice aren’t ancient history. They’re a defining part of being American right now.

Denise Lopez, an artist and designer, said for her the decision to reclaim the flag felt like part of that struggle.

“It was like a pit in my stomach,” she said. “It was almost like, is it now like what the Confederate flag felt like for my parents? And I was like no, I’m not going to feel that way every time I see an American flag.”

We heard a lot from people who shared this worry the U.S. flag has been weaponized, deliberately redefined as a more conservative symbol owned by some Americans more than others.

“We had a Black Lives Matter rally in our town and there were a lot of people driving by with American flags on the back of their pickup trucks as a counter-protest,” said Ben Eagleson, a car mechanic who lives in Olney, Ill. “It was like those of us supporting Black Lives Matter were somehow un-American or something.”

Eagleson, who is white, said he took his American flag down for a time, but it’s flying again now on a pole outside him home. 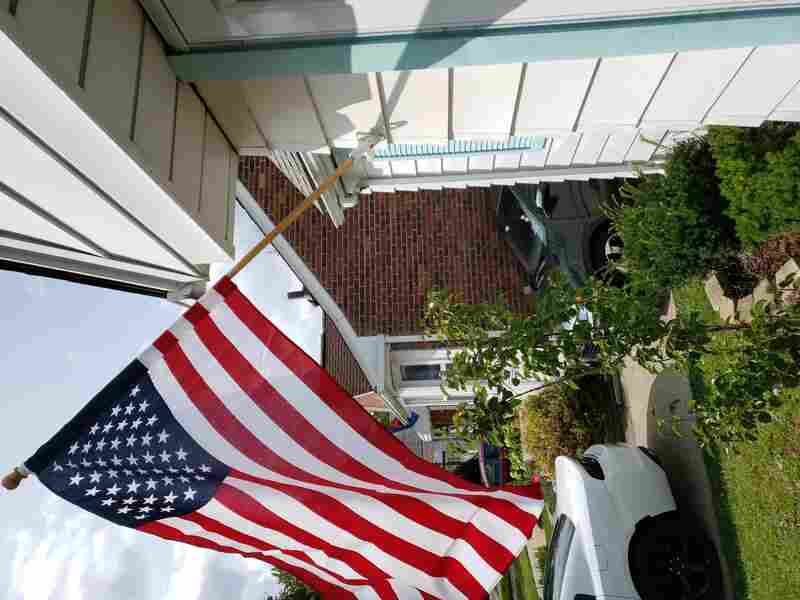 An Vu, the son of Vietnamese immigrants, sent NPR a photo of the U.S. flag he flies next to his garage. He says he misses the time after the Sept. 11 attacks when the country felt more unified. Courtesy of An Vu hide caption

Courtesy of An Vu 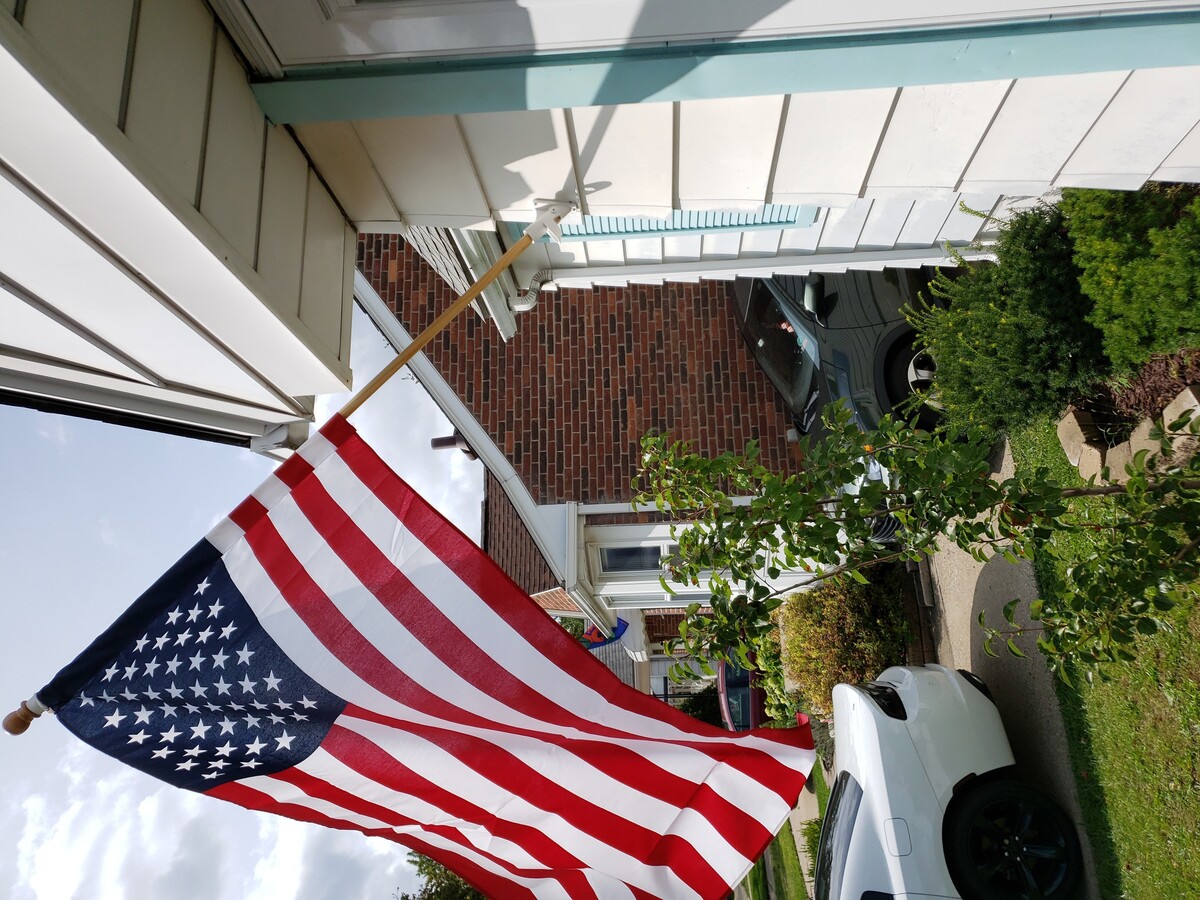 An Vu, the son of Vietnamese immigrants, sent NPR a photo of the U.S. flag he flies next to his garage. He says he misses the time after the Sept. 11 attacks when the country felt more unified.

Courtesy of An Vu

“I’d let something that had always been for me a positive symbol take on a negative meaning and I guess I just decided to reclaim it,” he said.

Regardless of race or political persuasion, a lot of Americans we heard from say they do see the U.S. flag as a hopeful and beautiful symbol, even in a time of deep national division when it has different meanings for different people.

An Vu told NPR he flies the flag over his front porch in Dearborn, Mich. Vu is a business analyst, the son of immigrants from Vietnam who first flew the U.S. flag when he was a kid after the terror attacks in 2001.

“I hope that flying the flag can return to what we felt like after [Sept. 11],” he said. “The sense of unity, the way were able to grow together after that was really amazing.”

A lot of people told NPR that kind of national unity and shared meaning feels elusive now. For that reason, many have chosen to fly the flag next to other symbols to give it more personal context.

For some, that means raising the Stars and Stripes along with a “Make American Great Again” banner. For others, the American flag is flying alongside a gay pride banner or Black Lives Matter sign.