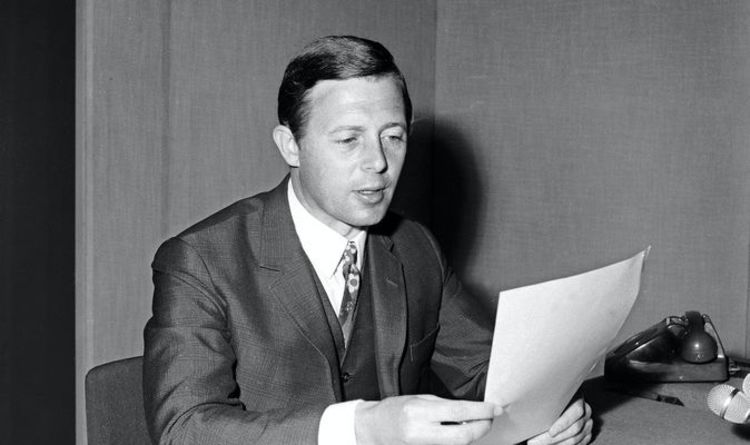 “I look incredibly confident here, poised to read the news bulletin at the BBC studios at Alexandra Palace in north London. I was 35 when this picture was taken in 1968 and spoke with very Received Pronunciation. I actually grew up in a working-class home in Wandsworth, south London, but had always wanted to be an actor and could adopt accents like a parrot.

I got the job almost by accident.

I started my professional career working for a London bedding firm that sent me to a department store in Cardiff to learn the retail trade.

While I was there I joined an amateur dramatic group and boldly banged on the door of a leading Welsh actress to ask how I could get into broadcasting.

She was terribly kind, thought I had a good voice and arranged a BBC audition.

I was on the radio the very next week in a BBC Children’s Hour serial. Later, I became a guest announcer and then a newsreader.

I only got into national news broadcasting because fellow newsreader Richard Baker had a cold one Christmas and I was asked to pop up for the weekend to cover for him.

I ended up staying eight years. There was no training. No audition. I was simply directed to a chair.

I read the news from a homemade Autocue device – a tin box with a glass front – and the script was fed through a roller. It was like reading words off a moving toilet roll.

It was all so lash-up. There were no earpieces, so the only means of communication with the control room was through a massive telephone which weighed a ton.

It started to ring during one news bulletin but it wasn’t on the desk. I started looking for it and it rang four times before I discovered a cleaner had put it in a drawer.

I had to keep apologising for the view of my left earhole.

All the newsreaders shared a communal dinner jacket, which was huge.

One of my colleagues, Martin Muncaster, was 6ft 4in, and even he wore it. I had to peg it at the back to make it fit.

We didn’t have a make-up department.

They just gave us two tins of foundation. One was called Gay Whisper, which we dabbed on the end of our noses.

The BBC employed blokes like me who looked ‘right’ and sounded straight.

We were bland, inoffensive and had a certain sameness. Over on ITN they had established names like Sir Christopher Chataway, who was a great athlete.