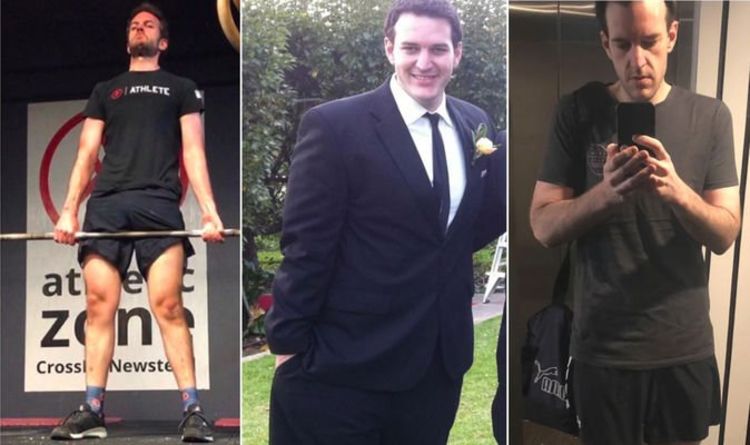 Posting his before and after weight loss transformation images on sharing site Reddit, the man was understandably proud of what he had achieved. After struggling with his weight and body confidence for most of his 20s, the man revealed that it wasn’t until his early 30s that he decided to turn his life around and attempt to slim down from his nearly 20 stone frame.

He struggled with his weight and cited his relationship with food for his biggest cause to weight gain.

He said: “After a lot of seesawing weight in my 20s I finally turned my life around two years ago.” This was when he turned 30.

In his before images the man weighed 19.7 stone and was struggling with his body confidence.

However, after discovering a particular diet plan, and going though a weight loss transformation, the man dropped to a much healthier 13 stone.

The man showed off his weight loss transformation in a series of before and after photographs.

The Reddit user, writing under the name “black_coffee_gainz”, revealed he used the Keto diet plan to shed the weight and transform his life.

“Turning my life around in my 30s was difficult,” he said.

“It took about six to eight months to lose most of the weight.”

When asked by another slimmer what diet plan he used to slim down, the Reddit user responded: “I did Keto for six months.”

What is the Keto diet?

The Keto, also known at the Ketogenic, Diet is a low-carb, high-fat diet that offers many health benefits and shares many similarities to the popular Atkins and other low-carb diets.

The Keto diet is an eating plan that drives the body into ketosis, a state where the body uses fat as a primary fuel source (instead of carbohydrates), says Stacy Mattinson, a motivational nutrition guru, and healthy lifestyle blogger.

Many on the plan will eat less than 25 grams of net carbs a day in order for their body to enter the fat-burning “ketosis” state.

However, the user revealed that the “high fat intake” of the diet wasn’t enjoyable for him therefore after doing six months of solid Keto dieting he decided to adjust his diet plan to his needs.

He said: “I did keto for six months but the high fat intake didn’t feel great.

“I now calorie count and do CrossFit,” in order to maintain his weight loss.