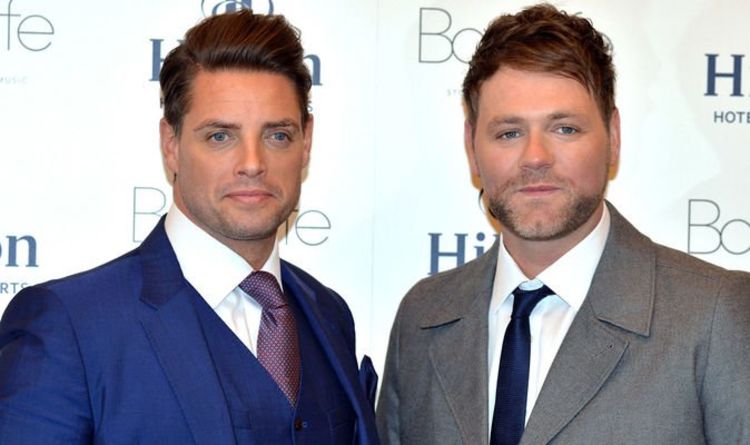 As the girls struggled with the lyrics, Brian asked Molly, 18 and sixteen-year-old Lilly Sue: “Do you realise this ****ing song is the reason why you live in a mansion, you go to university? My own ****ing kids don’t know my own song!” He also teased Lilly Sue, saying:  “I think it’s fair to say she got the voice from her mother.” As the girls left the stage he added: “I can’t believe my own “****ing kids don’t know my song…if it was Post Malone they’d know the ****ing words.”

Fan Colin Gannon told Express.co.uk: “The audience were in hysterics.”

Dublin-born Brian, 39, performed at London’s 100 Club for Musicians Against Homelessness as a fundraiser for national homelessness charity Crisis.

A spokeswoman for the charity said: “Brian paid for all the costs to put on two shows for us, one in London and one in Manchester so that every penny raised could be donated to Crisis.”

Brian was moved to do the benefit shows by the recent storms. He said: “I was looking out of my car window and the rain was coming down in sheets.

“I could only imagine what it would be like to be a person with no roof and no permanent shelter in a downpour like that, moving from doorway to doorway, not knowing where the next meal will come from, or when…”

The star, who also sings in Boyzlife with Keith Duffy, added: “I’m not a politician but I feel strongly about this issue. Every major city I have lived in – London, Dublin, Manchester, New York – has people sleeping rough and there is no need for it.

“This is a growing problem, in the middle of huge wealth, it’s obscene that it’s getting worse. It shocks me to learn how many ex-servicemen are on the street. These veterans fought for our freedom and our way of life, some are suffering with PTSD. It sickens me to see them abandoned.

“It’s not something that should be tolerated. We have a duty of care and they should be treated with respect.”

Brian, who moved to Australia in 2004 to be with his then-girlfriend Delta Goodrem before returning to Ireland in 2012, recalled a friend there who had slept rough.

He said: “When I lived in Sydney my best friend was Kyle Sandilands who was a morning DJ on the Kyle & Jackie O Show. Kyle had been homeless for two or three years in his teens and he told me so many shocking stories about life on the streets. It’s worse here because the weather is so punishing.”

Singer-songwriter Emily Capell joined the Crisis Choir to open the 100 Club show with a moving adaptation of Fairytale of New York.

McFadden ran up on the stage and joined in to their obvious surprise.

Then Andy Bennett of Ocean Colour Scene played before Brian performed with his band.

Crisis are a lifeline for thousands of homeless people over the festive period.

The centres offer immediate relief of warm food, shelter and many health and wellbeing services and introduce guests to Crisis’ year-round services so they can be supported to leave homelessness behind for good.

Just £28.87 can reserve a place for someone this Christmas and introduce them to the education, training and support to help end their homelessness for good through Crisis’ year-round services.