What Democrats, and Everyone Else, Are Getting Wrong About Latino... 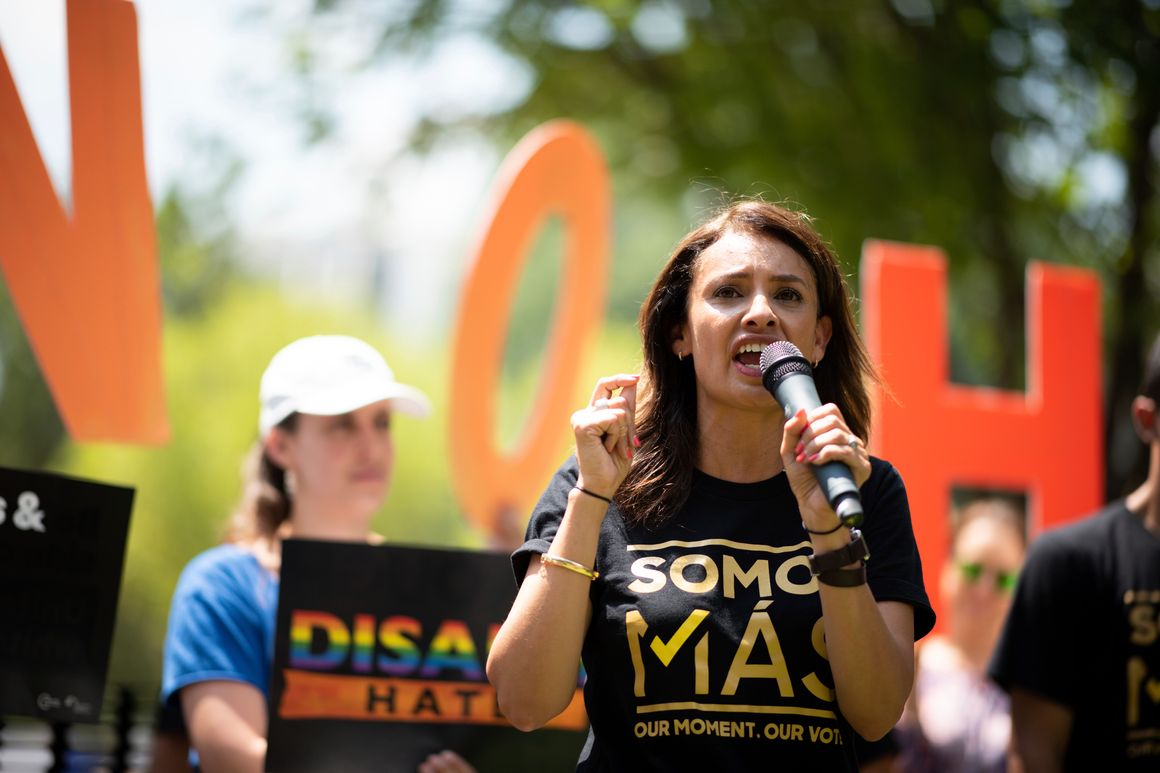 In surveys, polls and other research, Voto Latino has crafted a snapshot of America’s big, diverse Latino community that might contain some surprises for politicians trying to reach these voters. A growing number of Latino voters speak English and get their information in English. It’s a young population—the median age of a U.S.-born Latino is 19. And though the knock on Gen Z is that young voters are less engaged, in the Latino community, it’s often those young-adult family members who can matter most as the “purveyors of information” for the rest of the family, Kumar says.

It might be easy to assume Latinos are single-issue voters focused on immigration, but Kumar’s group has found something else. “Everything is about health care in the Latino community,” she said. Latinos are often part of the “sandwich generation” at a much younger age than the average American, responsible for caring for older parents and younger kids. And with Covid hitting Latino Americans hard, health care is especially important in 2020. (That idea seems to have gotten through to one campaign: Biden’s Latino-voter page mentions health care before any other issue; Trump’s doesn’t mention it.)

With Latino voters in everyone’s sights, what motivates this wide-ranging group to turn out? Can it even be treated as a single chunk? In two conversations this fall with political reporter Tara Palmeri, Kumar laid out her group’s theory of the case. This interview has been condensed and edited for clarity.

Tara Palmeri: Latinos are often called the “sleeping giant” of politics because they’re the fastest growing voting bloc, but low propensity voters. Even your own August poll showed that less than 60 percent of Latino voters even plan to vote, and 12 percent are still undecided. Why?

María Teresa Kumar: I think that the challenge is that some of them are tuned out. They’re not even tuned in to be undecided. As of two weeks ago, Latino Decisions came out with a poll that found that 50 percent of registered Latino voters had not been contacted by a campaign or political party. Why are we pressing the gas at Voto Latino at identifying and registering low propensity voters? It’s because no one is talking to low propensity voters.

Palmeri: Is there something specific that’s stopping them from getting to the polls?

Kumar: The biggest, honestly, is that no one talks to them.

Palmeri: Even when they watch television, they feel like the candidates don’t speak to them either?

Palmeri: So what is the state of the race when it comes to Latinos?

Kumar: I think that in Florida it’s going to be neck-and-neck. in the Latino community with Biden, but I think he is leading the Latino community. In Texas, Houston has been flooding, and there are droughts all over. These are things that are very aligned with the progressive agenda. And I can share with you that Beto O’Rourke is about to release some numbers: He and four other organizations have collectively registered 145,000 folks. Voto Latino by itself has registered 260,000 folks in Texas. [In 2018,] O’Rourke lost by less than 210,000 votes. And collectively, we will have registered more than 340,000 new voters. Together, we have exceeded his margin of loss. The Texas state House itself is very close to flipping this year., And if it flips —with the implications for redistricting —Texas would no longer be an artificially red state.

Palmeri: In 2016, exit polls showed that Trump won 28 percent of the Latino vote, and recent polls show him winning 30 percent in 2020. How is that Trump is doing better with Latinos this cycle?

Kumar: I don’t know if he is. I think a lot of the polling that’s been coming has not been necessarily statistically significant. And a lot of the polling has been concentrated in Florida but not across the other states. You don’t see headlines that say Trump is doing well in Arizona. It’s very much focused on Florida. I would say he has made inroads in Florida, or maintained it in Florida, because he never stopped communicating with Latinos in Florida. He was communicating with them in 2017, 2018, 2019. And the Democrats need to figure out how to use social communication, such as WhatsApp, Facebook messenger and Facebook, to push the progressive message, because people don’t know it.

Palmeri: What about Pennsylvania?

Kumar: Biden is winning the Latino vote. For Trump, Florida has been the petri dish of experimentation of messages that move Latinos and he’s starting to export it to other pockets of the Latino community. Will it work? We don’t know. I think Trump was going into Arizona, and now he’s pulled out of Arizona, but he was doing the same type of messaging in Arizona as he was doing in Florida, and it just didn’t stick. We’re seeing the messaging in Texas, and that’s sticking a little bit better among older Latino men specifically.

Palmeri: What is that messaging?

Kumar: The messaging is democratic socialism. He’s targeting small businesses. What I remind people is that Trump is promising to remove a payroll tax, and in doing so he’s gutting Social Security and Medicare. And for most immigrant communities, including small business, Medicare is your health care when you retire and Social Security is your retirement plan. People seem to understand that but you have to get really granular with them.

Palmeri: How are the Trump ads on the economy and criminal justice reform playing to Latinos?

Kumar: Not well. When we polled our audience back in June after the whole horrific death of George Floyd, the top three issues for Latinos were health care, jobs and racial inequities, specifically connecting it to policing. Latinos are in a very interesting intersection, where 68 percent of them really support the police but 63 percent of them simultaneously are very afraid of the police. It sounds incongruous, but it’s in fact what is happening. His “law and order” is a big dog whistle: “If you’re brown in this country, you will be more vulnerable.” When you look at people under 29, it’s tied to health care.

Kumar: I think that’s his strength and he’s been talking about it. The challenge for any candidate is in this scenario, Biden has been responsible and has been holding small rallies, so you don’t see pictures of the candidate. His message needs to penetrate across the board so that’s really hard. So he’s really depending on surrogates and a lot of online Zoom calls, like we’re doing. That’s not the masses.

Most young people are not going to Zoom for a candidate. Especially if you’re not used to this whole process. This is very insider. What we’ve been trying to do is invite the vice president to speak to our audience and we’re hoping that he can before the election. We’re reaching 15 million people who won’t tune into a Zoom but will tune into an IG [Instagram].

Palmeri: What’s coming up in focus groups when Latinos talk about Biden and Trump?

Kumar: With Biden, they’re getting to know him. When we added the question of Kamala and Biden, people really like her, they identify with her, not just as a woman, a woman of color but because of her immigrant roots and her ability to surpass so many things. And believe it or not, her close relationship with her mother. That is really something that really resonates in the Latino community and it’s something that they find relatable.

Palmeri: What about her police record?

Kumar: There’s a swath of them that are skeptical. What we communicate at Voto Latino is that our job is to get people registered and make sure that they’re participating. And then we get someone in office who is listening, someone we can negotiate with. Right now, we cannot negotiate with this president. Trump has no interest in reform.

Palmeri: What’s coming up about Trump?

Kumar: It’s more that they don’t trust him, more than anything. In these surveys, it’s the very first time that racial inequity has hit the top 10, let alone No. 3, and I’ve been doing this for 15 years. This is the first time that this is top of mind. Quite frankly, because under Trump, the level of anxiety even among children as young as 3 in the Latino community is through the roof.

I did a talk last year in Dallas to 3,700 mental health professionals about the public school systems in Texas. And there were two things that they flagged for me. One is that the No. 1 health issue that parents have for their young children is mental health in the Latino community. They also said that since Trump started running for our office, anxiety and depression identified in preschoolers and 3-year-olds is through the roof.

Palmeri: Has the Democratic Party worked enough on communicating with Latino men?

Kumar: I think the Democratic Party has to come up with a strategy in which they are communicating with the Latino bloc as a whole. They can’t just be focused on Spanish language media because that’s just a swath of who we are. My cousins who are all in their 30s barely speak Spanish and absolutely don’t consume their information in Spanish. It’s an older audience. Sixty percent of Latinos are under the age of 33 and 40 percent of voters are under the age of 29. Telemundo serves my grandmother and my mother.

about, Democrats, else, everyone, getting, Latino, voters, WRONG