‘Whatever Trust Has Been Built Is On Shaky Ground Now’ 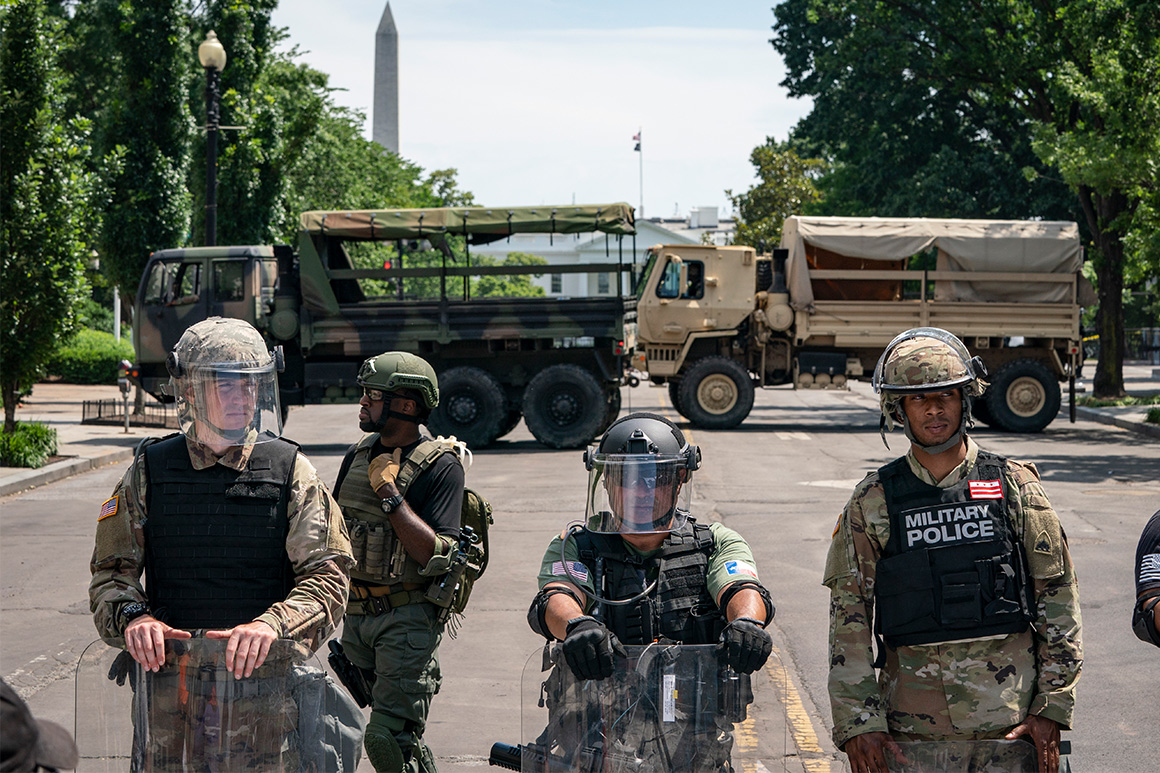 “Whatever trust has been built is on shaky ground now, and sending out military to suddenly be on the ground in many communities — unless it were desperately needed — would be a tragic mistake,” said Robinson.

On Tuesday, POLITICO Magazine spoke with Robinson about George Floyd’s killing, the crackdown on peaceful protesters outside the White House, and what all of this portends for the future of policing in America. She’s “aghast” by what happened in Minneapolis and “dismayed” by the military-style tactics used in Washington D.C. Yet she’s also hopeful that the positive, much-needed changes she’s seen since Ferguson will continue after the current wave of demonstrations ends. The transcript of our conversation is below, edited for length and readability.

Zack Stanton: On Monday, during a conference call with state governors, President Trump told them they weren’t being hard enough on protesters and said they “have to dominate” in using law enforcement to crack down on demonstrators. As someone with a background in criminology and how law enforcement interacts with the communities it serves, how different is that than the approach someone with experience in those issues would recommend?

Laurie O. Robinson: It is different. In [President Obama’s 21st-Century Policing Task Force] report, what we recommended for dealing with mass demonstrations was protecting the First Amendment rights of demonstrators. Certainly, when dealing with violent situations, you need to bring law enforcement forward to deal appropriately. But where you can, pull back riot police and minimize confrontation by putting officers wearing “soft look” uniforms in front. Minimize the use of military formations and militarized approaches, so that the crowd perceives that you are working with the community and are not an occupying force. That’s what our report was all about: The notion of law enforcement being guardians of the community and not an occupying force. Not warriors; working with the community to co-produce public safety.

Stanton: Your task force wrote that “law enforcement culture should embrace a guardian — rather than warrior — mindset to build trust and legitimacy … with the public.” Is there a particular hurdle that has kept more law enforcement from embracing that “guardian” role?

Robinson: Leadership and culture is key. Culture can change with proper leadership, recruitment and hiring, but sometimes that takes time. One thing that’s so key here is how decentralized policing is in the United States. We have 18,000 state and local law-enforcement agencies in the U.S. By contrast, in Great Britain, and I think there are fewer than 30 policing agencies. So if our 59 task force recommendations in 2015 had been issued in Great Britain, they would have been sent to Scotland Yard, and Scotland Yard would have sent down the edict to those very few agencies to change their procedures, change their training, change their processes. It still would have been a challenge to change culture and traditions, so it wouldn’t have changed everything overnight, but it would have been a big step forward. We have big challenges in bringing about change because we have such a decentralized system.

Stanton: One of those recommendations was that law enforcement agencies “should create policies and procedures for policing mass demonstrations that … are designed to minimize the appearance of a military operation and avoid using provocative tactics and equipment that undermine civilian trust.” Given that, what went through your head when you heard the reports of tear gas being used on peaceful protesters Monday outside the White House?

Robinson: I was dismayed by it. Dismayed. My understanding was that the crowd at that point was completely nonviolent. I thought it was inexcusable.

Stanton: Another finding from the report was that law enforcement can’t build community trust “if it is seen as an occupying force that’s coming in from the outside to impose control on the community.” How concerned are you about the president’s suggestion that he’s going to activate the U.S. military and use it for law enforcement purposes, both in D.C. and potentially in cities and states around the country?

Robinson: I am concerned. In the case of a real disaster — like hurricanes or floods — communities have welcomed military assistance. But this is something of a far different nature. We’re at a very delicate point. In particular cities and other jurisdictions, so many departments have worked very hard to build community trust. I know many, many chiefs who have worked diligently at this for a long period of time. And we’re at a point where no events are “local” anymore because of social media and communication. What happened in Minneapolis, it’s as if it happened next door — as has been clear in the last week. Whatever trust has been built is on shaky ground now, and sending our military to suddenly be on the ground in many communities — unless it were desperately needed — would be a tragic mistake.

Stanton: To pull back for a moment, the politics of policing issues have always been fraught. How have you seen the politics that surround issues of policing and law enforcement reform change over the last decade or so?

Robinson: One way it has changed is that for many years, police were simply viewed as “conservative” — in the criminal-justice sense — on most issues. But in the last decade or a little more, police have become much more of a voice for progressive reform in areas like substance abuse, to offer one example. I think this occurred because police, particularly police leaders, saw that they could not arrest their way out of the drug crisis. So they became supporters of things like drug-treatment courts. They didn’t go necessarily to decriminalizing drugs, but came to saying, ‘We need treatment, not just to arrest our way out of the problem.’ Similarly, with people with mental illness problems: ‘Let’s look for solutions that include addressing the behavioral issues and not simply incarcerating people with these challenges.’ Groups such as the International Association of Chiefs of Police have really been leaders on issues like that, whereas if you look back 25 or 30 years ago, we would not have seen leadership from IACP in those areas.

Stanton: Do you have a sense of how what we’re currently going through is going to change or complicate that trajectory?

Robinson: I would have answered that differently a few days ago. I don’t know now, with the unrest, how that’s going to affect things. It’s hard to say.

Stanton: Have you seen the video of George Floyd’s killing?

Stanton: As someone with expertise on issues of policing and law enforcement, what do you see when you watch a video like that?

Robinson: Well, I should say that there are many people who have far more expertise in details about the use of force. But I am aghast and horrified.

Stanton: Derek Chauvin, the officer who pinned down George Floyd by putting his knee on Floyd’s neck, had a history of complaints against him. Not to talk about him specifically, but in a broader sense, what is it that keeps officers like that from being held accountable?

Robinson: It really goes to individual department policy and HR and disciplinary systems, as well as appeals and arbitration rules in the departments and civil-service systems. And in some instances, there may be appeals to a police board that sits over that department, or civilian review boards. With arbitration boards, the unions play a role in representing those officers in most instances. It’s complicated, as is trying to fire any civil servant in most states or the federal system.

Stanton: You noted earlier that there are 18,000 different law enforcement bodies in the U.S.. How do you address a systemic problem when power within the law-enforcement system is so decentralized?

Robinson: One suggestion that I saw by professor Larry Sherman, one of the leading criminologists, is to establish something called a “police safety board” in every state that could independently revoke the license of any police officer whose pattern of performance predicts a high risk of low conduct. Civil service protections obviously are important, but they make it very hard to get rid of people.

Another key recommendation in our task force was expanding the National Decertification Index. After Watergate, there were instances of people who had been disbarred in one state going to another state and becoming lawyers. There was a national clearinghouse established so that people could no longer do that — one place that registers all the people who have been disbarred. But [for law enforcement officers,] there’s a very limited National Decertification Index, which does exist and that really needs to be expanded to a robust national register of decertified officers. Right now, if Derek Chauvin is fired, he could [theoretically] go into Wisconsin and get a police job pretty easily. The notion is to create a simpler system so there really is a professional tracking of who — this would be for actually breaking the law, not because you were fired because you could never file your time cards right.

Stanton: The trust between law enforcement and the communities they serve, particularly black communities and communities of color, was, in many instances, already pretty badly frayed before the past week. Do you have a sense of how to go about repairing it?

Robinson: I think that this is the critical issue. I will always remember after the Freddie Gray death and the unrest that followed [in Baltimore], a reporter said to me, “Oh, now will they do ‘community policing’?” Obviously, you cannot start something like community policing when there’s not a sense of trust. Trust is the initial step. And without it, you can’t begin doing anything else. It’s not just trust between police and citizens, but between government and citizens.

Stanton: Do you have any reason for optimism at this point in time?

Robinson: To work in this field, in criminal justice, you have to be an optimist, because otherwise you would not want to get up in the morning.

I do think that despite everything, the policing field has made a tremendous amount of progress since Ferguson. It’s now five and a half, going on six years since Ferguson. And we’ve actually seen a tremendous amount of change since then. It’s hard to recognize at this moment, but we’ve seen police leaders really do a tremendous amount of self-examination and adopt changes in areas [including] training on fair and impartial policing, on de-escalation, on crisis intervention for handling persons with mental illness. Does it mean that everything has changed and that the culture has changed? Obviously, the answer is no — not sufficiently. But there has been change. The last week has really underscored it. But there’s still a long way to go.