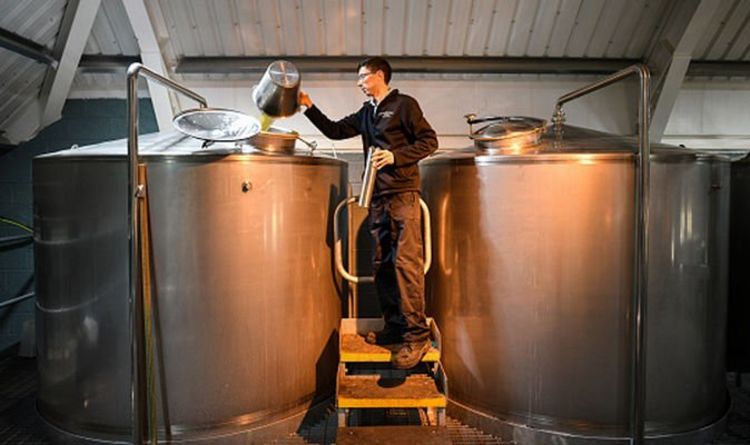 Sajid Javid will be urged to take action to ensure that fledgling whisky producers are not victims of a trade battle between the US and the European Union. A 25 percent tariff on single malt Scotch whisky came into force in October in American retaliation for EU subsidies for aviation giant Airbus. The latest figures show exports of single malt whiskies in November were a third lower than in the same period in 2018 and there are fears the trade war could threaten the survival of small distilleries.

He is concerned that the tariffs against Scotch could be increased to 100 percent and extended to blended whisky if the industry continues to be caught up in the transatlantic aviation row.

Mr Mundell said: “Leaving the EU is a great opportunity to forge new trade deals and have new trading relations. But what we don’t want is one of our iconic products being prejudiced in one of its biggest markets.

“That’s not free trade. We’ve got to get this sorted.”

The United States is the single largest market for Scotch whisky, with single malt exports worth more than £380million in 2018. That year 137million bottles of Scotch were exported to the US – the equivalent of more than four bottles per second.

Mr Mundell, who has secured a debate on the subject and will join fellow Scottish MPs in meeting with the Chancellor, is particularly worried about the fate of smaller distilleries.

He said: “There’s been a huge increase in the number of small distilleries in Scotland and a lot of those have been focused on the US market… They have built their business case on a US market and that market has been significantly disrupted…

“I think we have to demonstrate our positivity and we can do that by removing the duty on bourbon and the Prime Minister has already indicated he is sympathetic to that when he was in a distillery during the general election.”

A spokeswoman for the Scottish Whisky Association said: “The US is the industry’s most valuable market, and this tariff is hitting our producers hard. [We were] recently in Washington DC to discuss the US tariff as well as the EU’s current 25 percent tariff on the import of American whiskies into Europe.

“Distillers on both sides of the Atlantic are united in pressing for the urgent removal of all tariffs so our industries do not continue to pay the price for trade disputes on aircraft manufacture, steel and aluminium that have nothing to do with our sector.”

She said a cut to excise duty in the March Budget would help businesses “strengthen their presence in the UK”.

A source at the Department for International Trade said: “We are doing everything we can to resolve this. We are committed to protecting businesses from these kinds of tariff wars.

“By negotiating free trade agreements and taking up our independent seat at the World trade Organisation we will be able to do so more effectively.”

He said: “I officially welcomed him to Scotland. He did tell me about how proud he was of his mother’s Scottish heritage and how much he loved Scotland.

“I think we just have to continue to try and get it over to him that this is very damaging to Scotland and could be even more so if that was tariff was increased and it was extended to blends.”

ByOne Twitter used posted "the really stupid thing is that a county line goes through the middle of a village", while Robert Rees tweeted...
Read more
U.K.

ByTory MPs have voiced their concern over the tier system and have even stated they will not support the measures when it is voted...
Read more