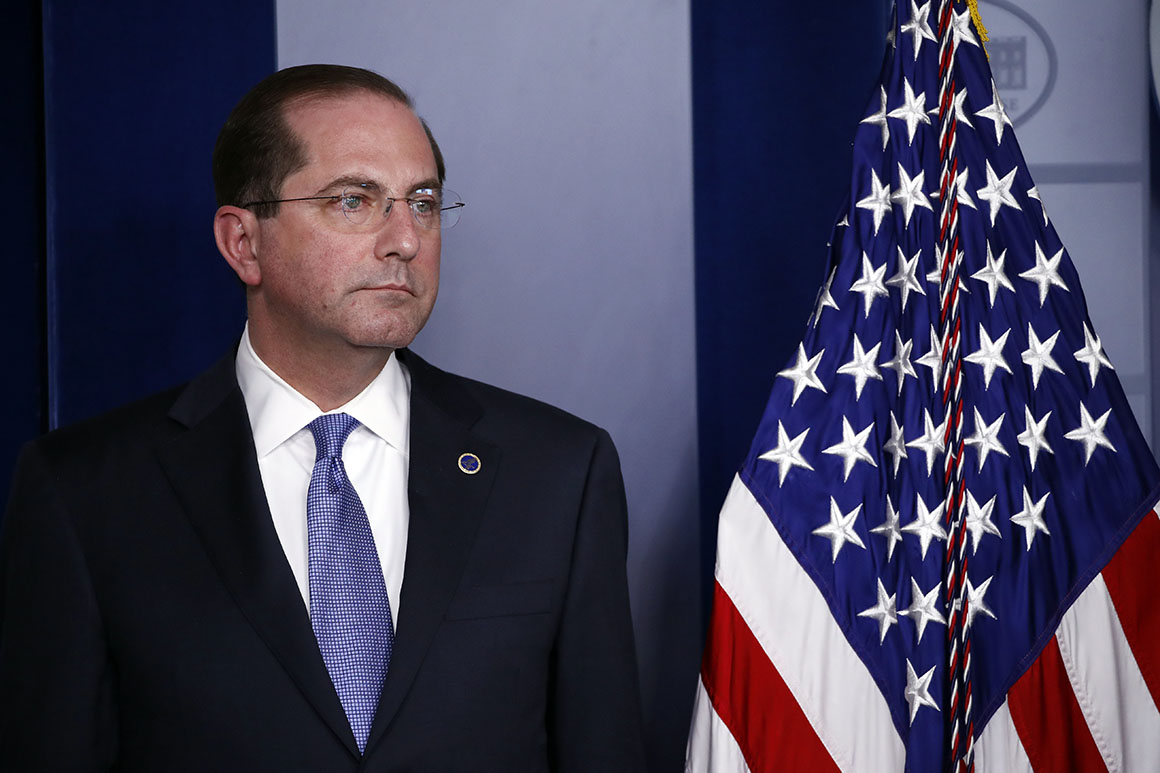 White House officials are weighing a plan to replace Health and Human Services Secretary Alex Azar, according to four people familiar with the discussions.

Senior officials’ long-standing frustrations with the health chief have mounted during the pressure-packed response to the Covid-19 outbreak, with White House aides angry this week about Azar’s handling of the ouster of vaccine expert Rick Bright. At a recent task force meeting, Azar assured Vice President Mike Pence that Bright’s move to the National Institutes of Health was a promotion — only for Bright and his lawyers to release a statement that he would soon file a whistleblower complaint against HHS leadership, blindsiding White House officials, according to three officials familiar with the meeting.

White House officials also have blamed Azar for long-running turmoil at the health department and a series of media reports that portrayed him as urging Trump to act on the Covid-19 outbreak in January, only for the president and his aides to disregard Azar’s warnings as alarmist. Azar has denied the reports, saying that Trump “never once rejected, turned down or dismissed a recommendation” of his or the task force’s.

The White House disputed that officials were considering a plan to replace Azar.

“The Department of Health and Human Services, under the leadership of Secretary Azar, continues to lead on a number of the President’s priorities. Any speculation about personnel is irresponsible and a distraction from our whole-of-government response to COVID-19,” said deputy press Secretary Judd Deere in a statement Saturday.

An HHS spokesperson said that "Secretary Azar is busy responding to a global, public health crisis and doesn’t have time for palace intrigue," and that he had not had any recent discussions about the possibility of his departure.

Nonetheless, White House aides have been frustrated with Azar’s management style since late last year when a feud with Verma broke into the open, a feeling that has only increased during the coronavirus crisis. But they have been worried about replacing the HHS secretary in the middle of a global pandemic.

Such a move, some officials said, could fuel the perception of President Donald Trump’s response as chaotic — and give ammunition to Trump’s critics, who have said that the Azar-led response to Covid-19 fell short during January and February. Trump and Azar have insisted that the administration took all necessary steps to prepare for the outbreak, disputing criticism as “fake news.”

However, the HHS secretary has few allies in the West Wing, and his role has diminished after Trump abruptly removed Azar as the head of the coronavirus response and replaced him with Pence at the end of February. White House officials have had previous conversations about replacing Azar in recent months, although the current discussions are more serious in the wake of increasing frustrations with Azar’s handling of internal matters, including the circumstances surrounding Bright’s removal, said two people familiar with those conversations. 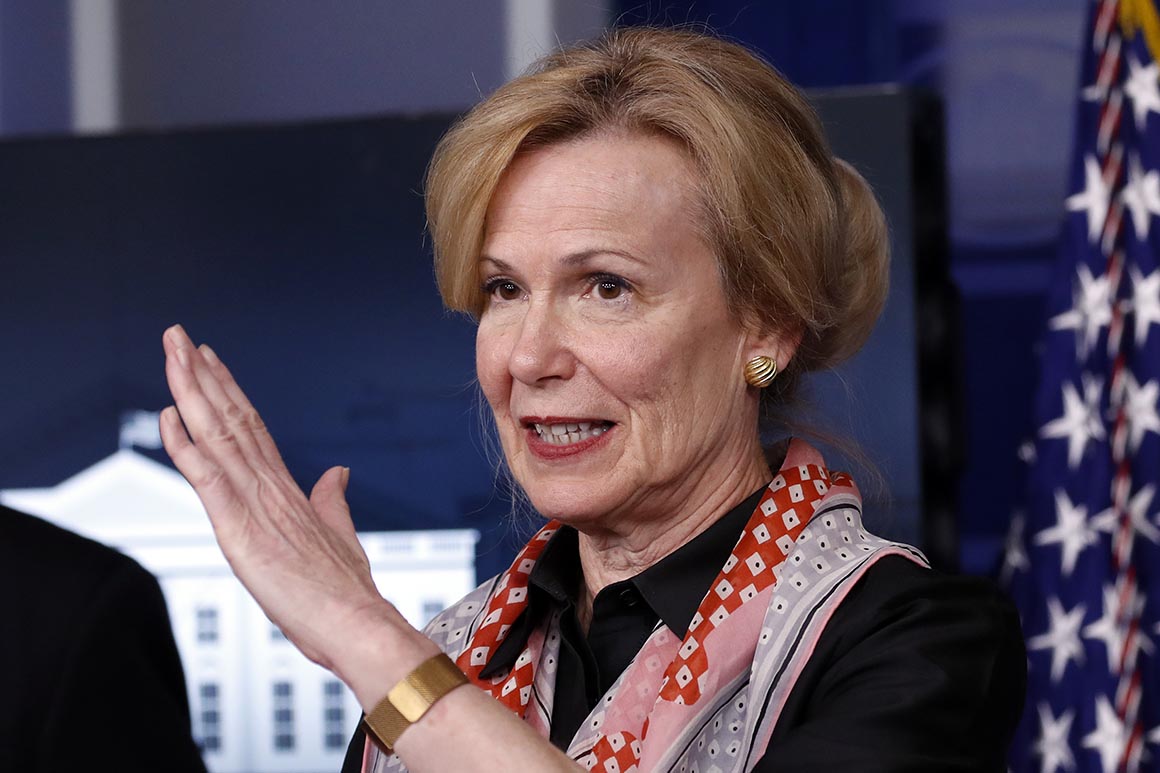 Meanwhile, Azar’s potential replacements are on much stronger footing. Birx has won over Trump and secured allies in the White House for her blend of scientific acumen and soft-touch diplomacy. Verma — whose own job status was shaky as recently as December amid her feud with Azar — has seen her star rise during the pandemic, with a series of swift actions to boost telemedicine and loosen regulations, along with other moves that have earned bipartisan applause.

Hargan, who led HHS as acting secretary between October 2017 and January 2018 after Trump’s first HHS chief, Tom Price, resigned after a controversy over his use of private aircraft, has had a much less visible role. White House Chief of Staff Mark Meadows spoke with Hargan this week, though their conversation did not involve any discussion of a potential job change, said one administration official.

Three officials pointed to Azar’s handling of Bright, the ousted vaccine expert, as an example of his tumultuous leadership of HHS. Those officials said Azar assured the White House that Bright had been promoted to a new job at NIH when, in fact, Bright had been demoted from his position leading the Biomedical Advanced Research and Development Authority.

Pence and other aides left the coronavirus task force meeting only to later learn Bright did not view his job change in the same way and would be filing a whistleblower complaint to outline the “retaliatory treatment to which [Bright] was subjected by HHS political leadership after raising appropriate science-based concerns about White House pressure on treatment and vaccines related to the COVID-19 pandemic,” according to Bright’s lawyers.

It was a different story than the one Azar had just presented in the meeting, and the latest blow to Azar’s standing in the White House.

In a statement, HHS characterized Bright’s move as a transferring of "the skills he has applied" at BARDA to the NIH, "as part of a bold plan to accelerate the development and employment of novel point-of-care testing platforms."

Since being replaced as head of the coronavirus response on Feb. 26, Azar has made few appearances at daily press briefings on the coronavirus fight even as deputies like top infectious disease doctor Anthony Fauci routinely accompany Trump and provide public updates.

The past few weeks, meanwhile, have arguably marked the most difficult stretch of Azar’s tenure in the Trump administration. A series of reports critical of Trump’s leadership of the coronavirus response angered White House aides over their portrayal of Azar in a more positive light, and prompted a public public rebuttal from the president. Days later, the White House installed former Trump campaign aide Michael Caputo as HHS’ top spokesperson in a move widely seen as an effort to exert more control over the health department’s activities.

Azar’s chief of staff and trusted aide, Brian Harrison, came under renewed fire this week over his role in steering the day-to-day coronavirus response early on. Administration officials have also recently discussed firing Harrison, who has long been hampered by detractors within the White House and across parts of HHS, two people familiar with the discussions said.