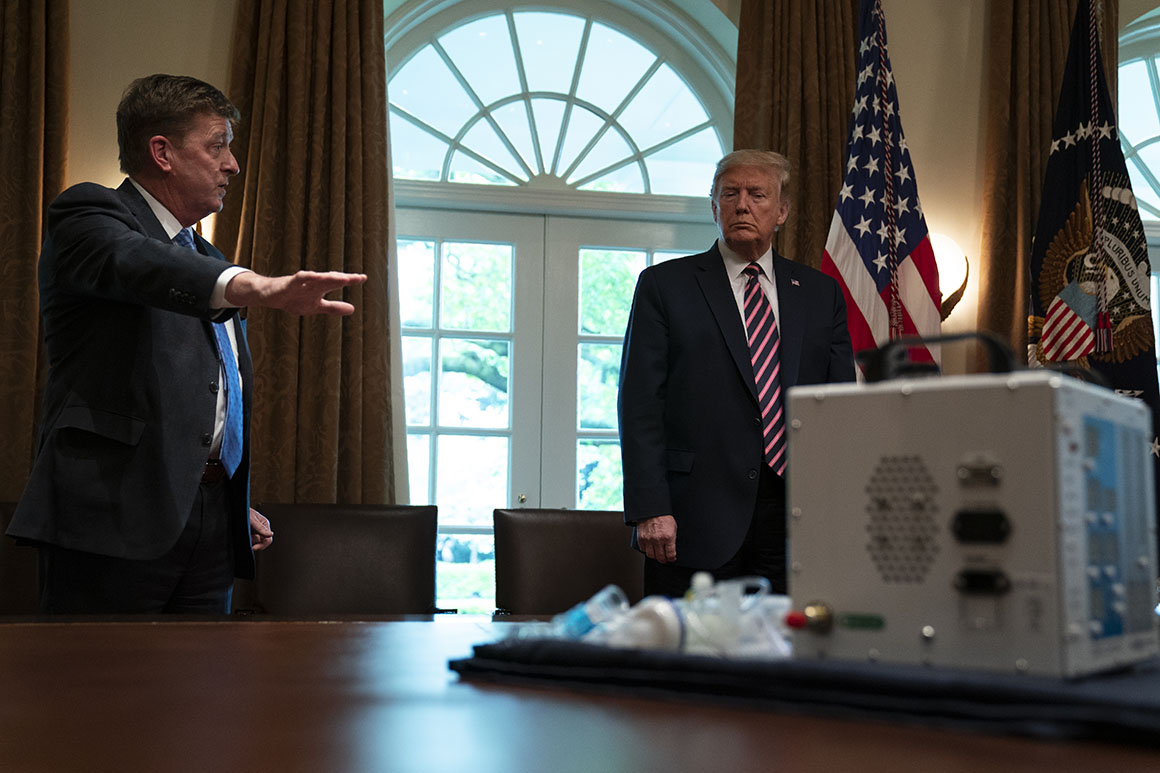 Jared Kushner raised eyebrows Wednesday when he proclaimed on Fox News that the White House’s response to the coronavirus pandemic was a “great success story.”

“The federal government rose to the challenge," the president’s senior adviser and son-in-law said. "I think that that’s really, you know, what needs to be told."

The statement quickly took off online, where many were quick to note that just the day before, the country had topped 1 million known cases of the deadly virus. Hours after the interview, the U.S. would reach another grim marker: The coronavirus had killed more Americans than the Vietnam War.

It’s a narrative the White House has been building over the last few weeks, as the administration looks to find victories in a crisis during which praise has been hard to come by and lofty presidential pledges have at times gone unmet. President Donald Trump for weeks has been talking about ventilator production every chance he gets, often pivoting to the issue when pressed about ongoing testing difficulties. The White House also lined up a flurry of calls between Trump and foreign leaders late last month during which the president pledged to send surplus ventilators. And just this week, Vice President Mike Pence traveled to a converted General Motors plant in Indiana that was producing thousands of ventilators.

“Ventilators was going to be a big problem,” Trump said in the Oval Office on Tuesday. “Now we have really — I mean, through an incredible amount of work by the federal government, we have a big, big beautiful overcapacity.”

The narrative arc of America’s ventilator supply began in March, when local officials began warning of a dire shortage that could be just weeks away. The fears were based on early projections of worst case scenarios if the disease continued to spread at a rapid pace through the country.

New York Gov. Andrew Cuomo at one point fretted that his state may need 30,000 to 40,000 ventilators to meet a surge in coronavirus patients, an amount that far exceeded the federal government’s stockpile of roughly 10,000 ventilators.

At the White House, Trump cast doubt on Cuomo’s numbers and dragged his feet on invoking a Korean War-era law, the Defense Production Act, to compel private companies to rapidly produce supplies like ventilators, opting instead to bark orders at companies like GM on Twitter.

America, Trump said at one point, is now the “king of ventilators.”

While ventilator production ramped up, varying degrees of shelter-in-place and social-distancing mandates nationwide also helped slow the rate of new infections, reducing the strain on hospital resources like ventilators.

The confluence of events has helped create an unexpected surplus of ventilators across the country.

In California, which implemented the country’s first statewide stay-at-home order, Democratic Gov. Gavin Newsom started sending 500 of his state’s ventilators to other locations in early April.

In New York, which has tallied more than 300,000 known cases of Covid-19, the disease caused by the novel coronavirus, and more than 18,000 deaths, Cuomo hasn’t expressed a need for more ventilators in his state since early April.

“We’ve stabilized the health care situation,” he said in mid April, announcing that he was shipping off 100 ventilators to Michigan, and 50 to Maryland. Days later Cuomo said his administration had identified as many as 400 ventilators it could send to Massachusetts on short notice. Later it shipped 100 ventilators to neighboring New Jersey.

At the White House, Trump boasted about the progress. “Because of our early and aggressive action, we have avoided the tragedy of health care rationing and deadly shortfalls that have befallen many other nations,” he said on April 16.

Days later, New Jersey decided it, too, could spare ventilators, sending 50 to Massachusetts and returning 100 of the machines that it had received from California.

Trump last week complained that the situation wasn’t getting enough attention, appearing aggrieved that he was getting so many questions about the ongoing testing shortages that could hamper state’s attempts to reopen sectors of the economy.

“We’re making hundreds of thousands of ventilators right now,” Trump said. “Nobody writes about that. You know, at the one time, all they talked about was ventilators, right?”

When Trump met with three governors of hard-hit states at the White House this week, he made sure to bring up the subject of ventilator supply — eliciting praise for the government’s response.

Democratic Gov. John Bel Edwards of Louisiana told the president his state had “certainly had more than we needed” when it came to ventilators, thanking Trump for 350 ventilators from the national stockpile. “We’re thanking God for that,” he said, “because … the modeling was so bad at one time.”

The White House is now proclaiming that the ventilator problem is solved, despite a widespread expectation that there will be a second wave of coronavirus in the fall.

“We will never have to worry about ventilators again. We’ve got plenty of them,” said Peter Navarro, a trade adviser at the White House and the aide tapped to oversee Trump’s use of the DPA. “The demand is far less than the original projections at the height of the panic.”

Navarro, who made his comments while traveling with Pence on Thursday to the GM facility, conceded that FEMA’s stores of ventilators “really weren’t set up for a sustained pandemic,” calling it a lesson learned by the administration.

The administration, he said, was debating whether to significantly expand the national ventilator stockpile, or whether to rethink the concept of a federal stockpile altogether.

“You can have a physical stockpile at FEMA and you can also have a stockpile at the production level, with reserves,” he argued.