WHO sends first medics, supplies to Iran to fight coronavirus 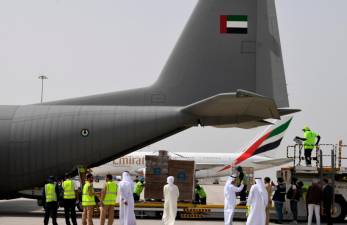 DUBAI: The World Health Organization on Monday sent its first planeload of assistance to Iran to help fight coronavirus, dispatching six medics with tonnes of medical equipment and test kits aboard a UAE military aircraft.

“Today’s flight will carry 7.5 tonnes of medical equipment and supplies, primarily the critical items needed for infection prevention and control to support health care workers in Iran,“ said Robert Blanchard from the WHO in Dubai.

As the supplies worth more than US$ 300,000 (RM1.2 million) – including gloves, surgical masks and respirators – were loaded onto the United Arab Emirates military transport plane in Dubai, Blanchard warned that global supplies were running low.

“What we see now is that demand has greatly exceeded our available stocks … and we are struggling to get access to more supplies.”

The six-member medical team is made up of doctors, epidemiologists and laboratory specialists who will help the Islamic republic detect and control the virus, Blanchard said, adding it was the first WHO team to be sent to Iran since the crisis began.

Iran on Monday raised its coronavirus death toll to 66 – the highest outside China – with 1,501 confirmed cases.

WHO operations manager Nevien Attalla said some 15,000 health workers in Iran would benefit from the supplies which were the “first big shipment which supports the response to coronavirus”.

“Iran is a challenging country. You don’t have always easy approvals to go,“ she said.

The UAE provided the military transport plane for the flight to Tehran despite having downgraded its relations with the Islamic republic amid fierce rivalry between Iran and regional power Saudi Arabia.

Gulf states have announced a raft of measures to cut links with Iran to curb the spread of the virus, cutting off transport links and telling citizens not to visit.

Some 129 cases have been confirmed across the UAE, Bahrain, Kuwait, Oman and Qatar, many of them pilgrims returning from Iran.

Bystaronline@reachplc.com (Unzela Khan) A five-year-old boy has been viciously attacked by a pack of dogs, ripping his scalp and ear off as he walked home...
Read more