WHO warns of mask shortages as virus cases rise worldwide 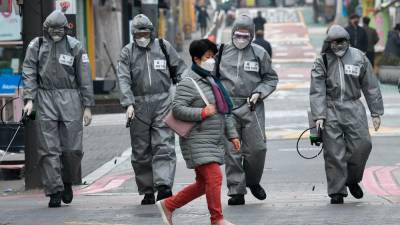 BEIJING: Countries rushed to protect their supply of masks on Wednesday as panic buying, hoarding and theft spread over fears of the deadly coronavirus epidemic, with global health officials warning that stocks of protective gear were rapidly dwindling.

The disease, which first emerged in China, is appearing in new countries almost every day, with Iran, Italy and South Korea facing growing caseloads.

The death toll in Italy soared to 79 on Tuesday, with more than 2,500 people infected. A group of Italian tourists was placed in quarantine in India, with 17 testing positive for the virus.

One bright spot has been China’s apparent progress in slowing the epidemic, with official figures on Wednesday showing new cases falling for a third straight day.

More than 90,000 people have been infected and around 3,200 have died worldwide, with Iraq reporting its first death from the disease on Wednesday while dozens have died so far in neighbouring Iran.

The death rate is around 3.4%, much higher than the seasonal flu at under 1%, according to the World Health Organization (WHO).

The vast majority of cases and fatalities have been in China where tens of millions of people have been placed under quarantine, but infections are rising faster abroad now, prompting countries to discourage large gatherings and cancel a slew of events.

The death toll in the United States climbed to nine, many linked to a nursing home near Seattle, while the overall number of infections shot past 100.

The WHO voiced concern that masks, goggles and other protective equipment used by health workers were running out due to “rising demand, hoarding and misuse”.

“We can’t stop Covid-19 without protecting our health workers,“ WHO chief Tedros Adhanom Ghebreyesus told reporters in Geneva, noting prices of masks have surged sixfold and the cost of ventilators has tripled.

Tedros said the WHO had shipped more than half a million sets of personal protective equipment to 27 countries, but warned that “supplies are rapidly depleting”.

Shortages of equipment in China caused thousands of medical workers to become infected with a dozen dying, prompting the country to step up supplies by repurposing production lines at diaper, coat and smartphone factories to make masks and hazmat suits.

At least 500 people queued up outside a supermarket in Seoul to buy masks on Wednesday, with President Moon Jae-in apologising for shortages this week.

South Korea makes 10 million masks a day and the government has ordered manufacturers to supply half their output to post offices, pharmacies, and a nationwide agricultural co-operative for sale at a fixed low price, with a five-per-person limit.

The virus has infected more than 5,600 people and killed 32 in South Korea, with more new daily cases there now than in China.

China reported 38 more deaths on Wednesday but only 119 new cases, its lowest number since January, with most infections in central Hubei province’s capital Wuhan, where the virus was first detected in December.

“Mask prices have skyrocketed everywhere and there are shortages, most likely because hoarders are trying to make money at the public’s expense,“ Jakarta police spokesman Yusri Yunus told AFP.

Russia issued a decree Wednesday banning the export of masks, respirators and hazmat suits to ensure access to the items for medics treating coronavirus patients and the public.

In Italy, a top civil protection official told AFP the country, which does not make face masks, is getting 800,000 of them from South Africa but needs at least 10 million more.

Italian hospitals had initial supplies but the rapid spread of the epidemic has put the health system under strain, said Civil Protection Department director Luigi D’Angelo.

French President Emmanuel Macron said Tuesday his government would requisition all face mask stocks and production in the coming months in response to the outbreak, after 2,000 masks were stolen from a hospital.

While shoppers stock up, policymakers are scrambling to prevent a global economic downturn.

The US Federal Reserve’s policy-setting committee slashed its key interest rate by half a point to a range of 1.0-1.25% – the first between-meeting cut since the height of the global 2008 financial crisis.

Most Asian and European equities, however, rose on Wednesday. – AFP