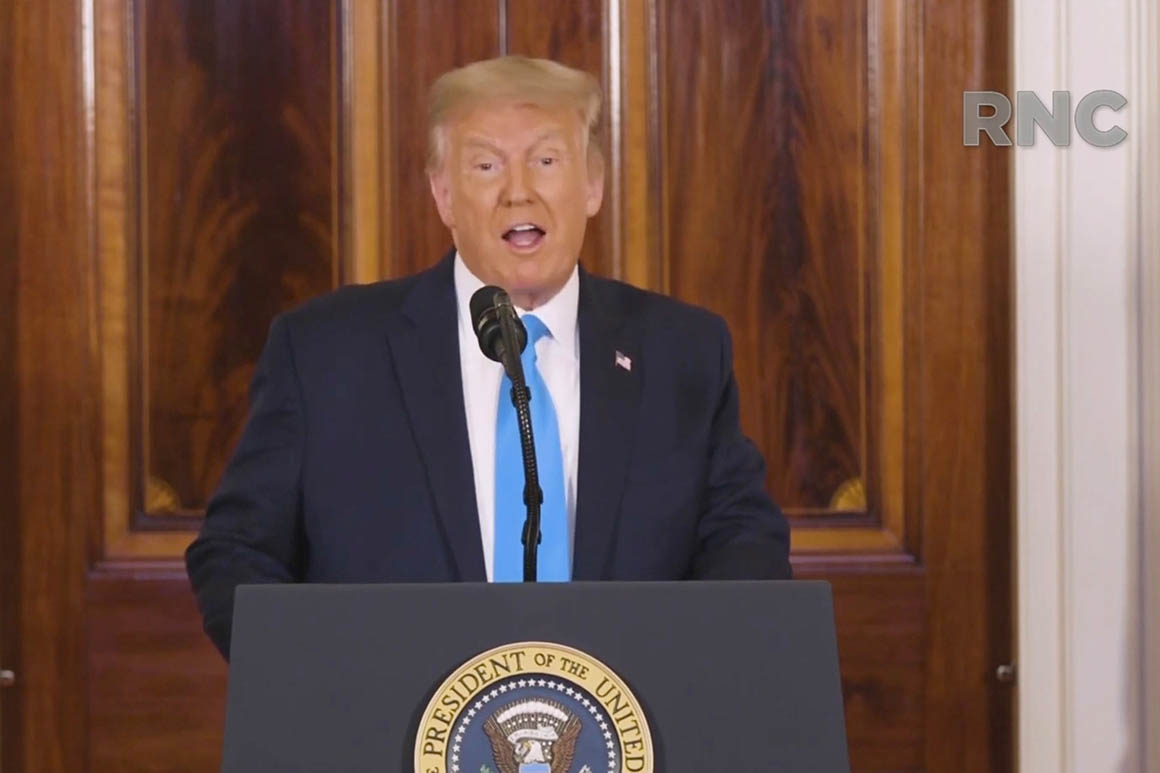 What’s notable is how the conventions — which come to a close with Trump’s speech this evening — have had a relative absence of finely crafted, elevated political speech. Historically that was a primary purpose of these gatherings. In general, there haven’t been crackling new slogans, or fresh metaphors to capture the state of contemporary America, or crisp phrases that keep repeating and finally culminate in a roaring crescendo. There have been few attempts at such rhetorical acrobatics, and those few attempts have not been memorable.

There’s no mystery, of course. It’s hard to have a roaring crescendo when there is no audience present to roar. But this year’s virtual conventions ratified a migration in political communication that has been underway for a generation before Covid-19—away from rhetorical loft, toward language that is more conversational or, in some instances, downright guttural.

Just as the national shutdown accelerated a long-term trend in retail in which fewer transactions occur in physical stores, the pandemic has accelerated a trend toward deformalizing political speech.

“We were trying to have a direct conversation with voters,” said Democratic consultant Stephanie Cutter, who took a lead role in staging the virtual convention. “There was no soaring oratory that would go down in the history books.”

This was the result, she said, of extensive research conducted on the different ways people respond when someone is speaking alone a camera, rather than before an audience. As a general rule, they want simple language, delivered briefly, culminating not in a rhetorical flight but a specific call to action. Many speakers, she recalled, “thought we were insulting them” when told they had only a couple minutes to speak. “We said, “No, no—this is what you want.”

Obama, of course, got more than two minutes. But even his 19-minute speech illustrated the phenomenon. Many observers noted the contrast between the unifying tone of the 2004 Boston convention speech that first vaulted the Illinois state senator to fame and his first convention speech as ex-president this year, which sharply confronted Trump and warned that democracy itself is on the line this fall. Both speeches won strong reviews. But there was large contrast not simply in message but style of delivery. In 2004, he struck a sermon-like tone, and famously used wordplay to make his larger point: “There is not a liberal America and a conservative America — there is the United States of America. There is not a black America and a white America and Latino America and Asian America — there’s the United States of America.” In 2020, he opened his remarks by saying, “I want to speak as plainly as I can” about the election, and he laid out his case against Trump in everyday language, including that he fights the pandemic “by just making stuff up.”

Jeff Shesol, a historian and Democratic speechwriter, said technology has often driven stylistic changes, and is doing so again. “TV pretty well killed old-style oratory — the sweeping gestures and the shouting that could be heard from the back of the hall, when it had to be heard in person — and Zoom heightens the intimacy of the speaker-viewer relationship even further,” Shesol said. “When you’re speaking to the nation through an iPhone camera in your den or your home office, as a lot of the Democratic speakers had to do last week, the whole exercise becomes informal to the extreme, and scripted lines sound even more canned and clunky than they might otherwise.”

A noted Republican speechwriter, Michael Gerson, said that major convention speeches usually have the same strategic goal—to place a leader and the moment within a larger historical context—and that is harder without an audience. “You can’t effectively use humor, either to attack or to self-deprecate,” Gerson said. “You can’t use applause lines or refrains to build momentum.”

But both Gerson and Shesol emphasized an identical point: If a speech is uninspiring, it is usually the result of uninspired thinking leading to uninspired writing. “Any speechwriter who uses these constraints [of technology or social distancing] to claim a speech can’t be memorable is … not very good at his or her job,” Gerson wrote in an email.

Journalist James Fallows, who wrote speeches for Jimmy Carter in the late 1970s and has written often about political rhetoric, said Obama over the years has offered many examples of speeches that are cumulatively powerful, even as they may not produce specific lines that echo. Perhaps reflecting the general coarsening of political discourse, amplified in the Trump years, Fallows noted that the most memorable phrases these days are more divisive than uplifting: the “Lock Her Up!” chant used by Trump partisans against Hillary Clinton in 2016, or Trump’s dire image of “American carnage” from his 2017 inaugural speech.

It’s been true for a long time that any politician aspiring to oratorical heights is walking a tightrope. Ted Kennedy redeemed his failed 1980 presidential campaign with a rafter-shaking convention speech in New York that proclaimed, “For all those whose cares have been our concern, the work goes on, the cause endures, the hope still lives, and the dream shall never die.”

But Robert Dole, who was then age 73, contributed to his own doom in 1996 when he tried to get lyrical in his San Diego convention speech, with a nostalgic portrait of the national purpose he had known as a young man: “Let me be the bridge to an America that only the unknowing call myth.” Bill Clinton, gladly accepting Dole’s gift, flayed him mercilessly through the fall, saying Dole wanted to “build a bridge to the past” while Clinton was building “a bridge to the 21st Century.”

What’s more, it’s common for politicians to get caught behind the times with their political language. In 2004, staffers at the Democratic National Committee used to lampoon their own nominee, John F. Kerry, for using Kennedyesque exhortations to make pedestrian points. Taking lunch orders, these staffers intoned, “And so I ask, who among us would not enjoy a delicious Subway sandwich.”

Of course, just as retail stores aren’t going away, even as they lose market share to on-line shopping, classic political oratory likely will still have a place going forward. Perhaps it will be like a tailored suit. In some professions, many people used to wear them to work every day; now perhaps they keep just a couple in the closet for special occasions once or twice a year.

Cutter, who in the past worked for both Kerry and Ted Kennedy, said “it’s too soon to tell” what shape conventions take in a post-pandemic future, but there will still be some role for traditional political oratory. “People still want to go to a rally,” she said. “They still want to see the candidate.”