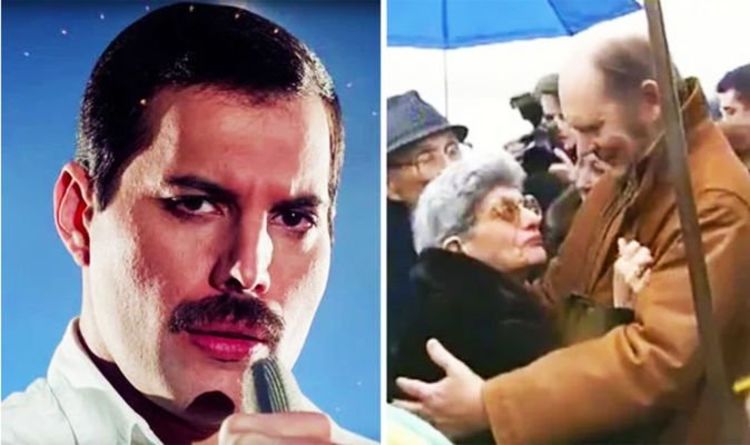 Freddie Mercury was born Farrouk Bulsara in 1946 to a traditional family in Zanzibar. From the earliest days he stood out. His mother remembered that he had been the biggest supporter of their move to the UK in 1964, the teenager desperate to explore an exciting and progressive new society. Within just a few years, his life had diverged very far from the family’s origins and their new suburban world in Feltham, Middlesex. The Queen frontman described just how shocked his parents were – and why.

Jer admitted Freddie was forced to leave home within a few years of moving to the UK, when his passion for music proved a problem in their neighbourhood.

Freddie threw himself into the artistic and musical whirl of bands and fashion in central London. And when the budding pop star came home, his parents were confronted with a new side to their son.

Freddie said: “The concept of Queen was to be regal and majestic.

“Glamour was part of us, and we wanted to be dandy. We wanted to shock and be outrageous.”

He certainly succeeded. The band soon started drawing attention and Freddie’s showmanship on stage and off was a big part of it.

However, it wasn’t just the fans whose eye were opened, the star’s conservative parents were also shaken when he returned home and very worried about what the neighbours would think.

ByLisa Marie Presley has been married four times, and in that time she has had a number of children. She has had four children...
Read more
Entertainment

ByHe did not win, however, but his co-star Reese Witherspoon won the Best Actress award for her portrayal of Johnny’s wife, June Carter. Luckily, before...
Read more
Entertainment

By Melissa Roberto Chrissy Teigen is opening up about her grief after suffering a pregnancy loss.The 34-year-old wife of John Legend announced the loss of the couple's...
Read more
Entertainment

ByALL adults should do a minimum of 150 minutes of vigorous physical activity per week, even more vital for well-being and mental health in...
Read more

Bybshilliday 2020 has been such a stressful year that even cool and calm Pat Sajak has gone over the edge. He ‘yelled’ at a ‘Wheel...
Read more