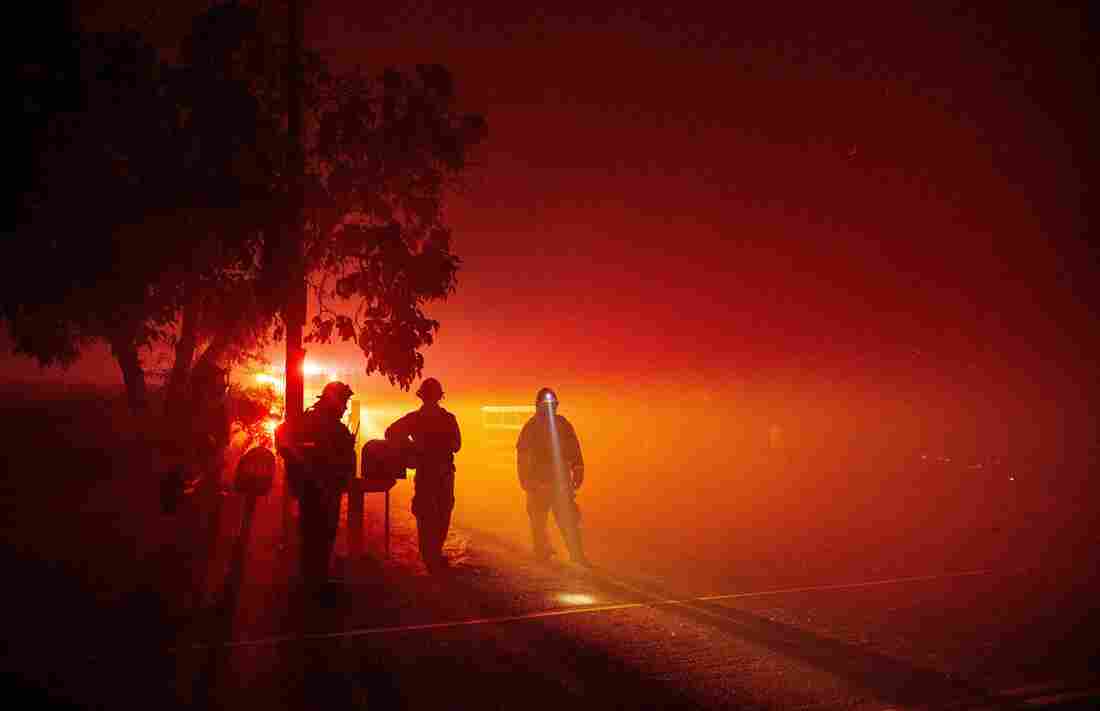 Firefighters in the valley area of Vacaville, in northern California, during the LNU Lightning Complex fire on Aug. 19, 2020. Josh Edelson/AFP via Getty Images hide caption 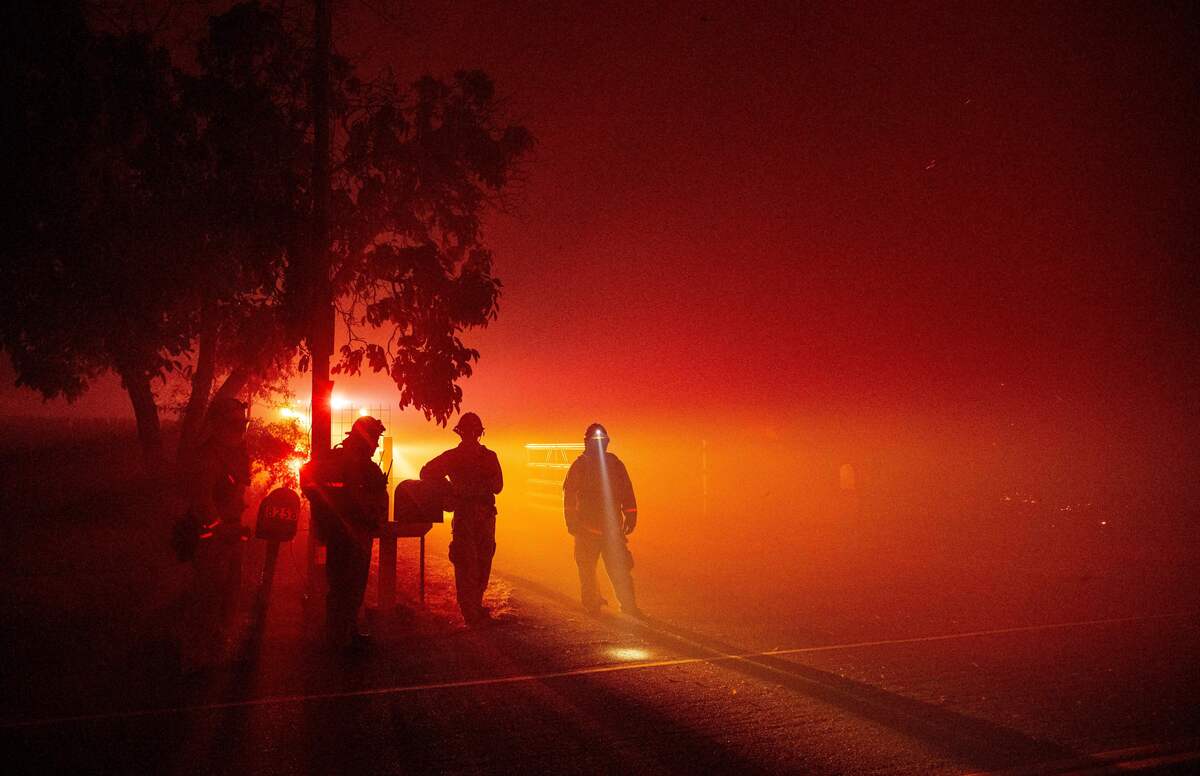 Firefighters in the valley area of Vacaville, in northern California, during the LNU Lightning Complex fire on Aug. 19, 2020.

When firefighter Ahri Cornelius got the call that his Missoula, Mont., based crew was deploying to central California, he had some reservations.

They’d be traveling from a rural state with a relatively low infection rate to California, a coronavirus hot spot. Cornelius also has a three-year-old toddler back home with a preexisting lung condition.

“Coming down here and knowing that you’re going to be around this many people in such a busy setting definitely stirred up quite a bit of anxiety for all of us,” Cornelius said.

But when they arrived at the SCU Lightning Complex fire east of San Jose, some of those anxieties eased. His 16-person crew has thus far mostly been able to stay distanced from other teams. And at the usual sprawling fire camp, social distancing is a priority.

“People are wearing masks walking around camp right now,” he said by phone during a break from a 24-hour shift.

To get into his camp to eat and sleep, Cornelius has to walk through a temperature screening tent. There are mandatory sanitation stations, and all meals are boxed by masked and gloved workers and handed to them. For firefighters, it’s stressful enough trying to stay safe while working a megafire like the SCU. Now, there’s a pandemic to worry about too. 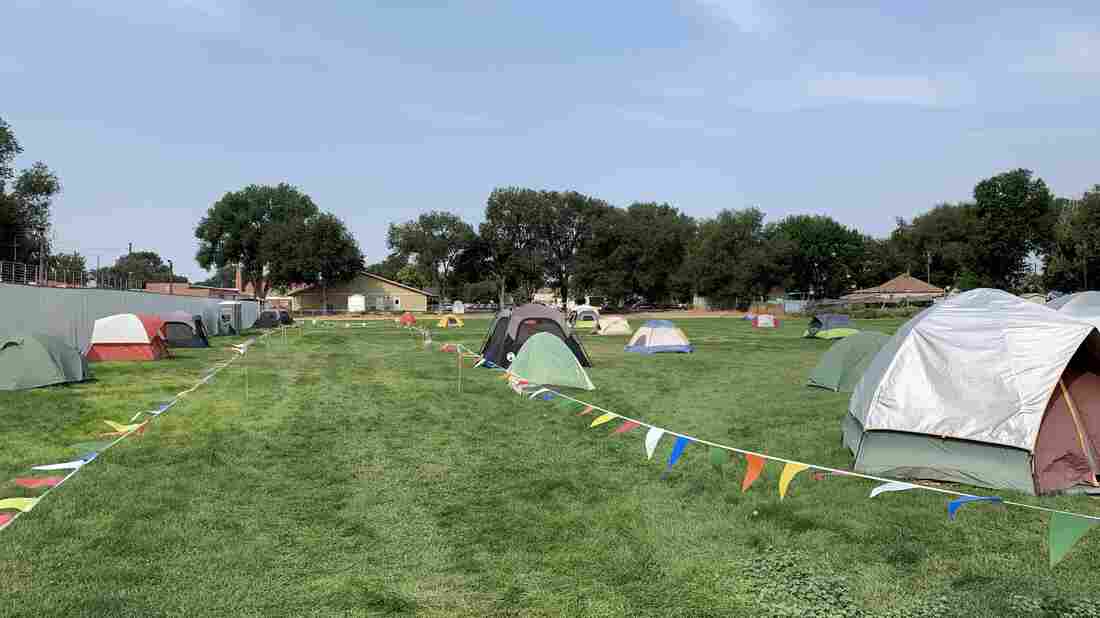 In a normal wildfire year, there might be 10 times as many tents clustered into a park like this one in Vale, Ore. Kirk Siegler/NPR hide caption 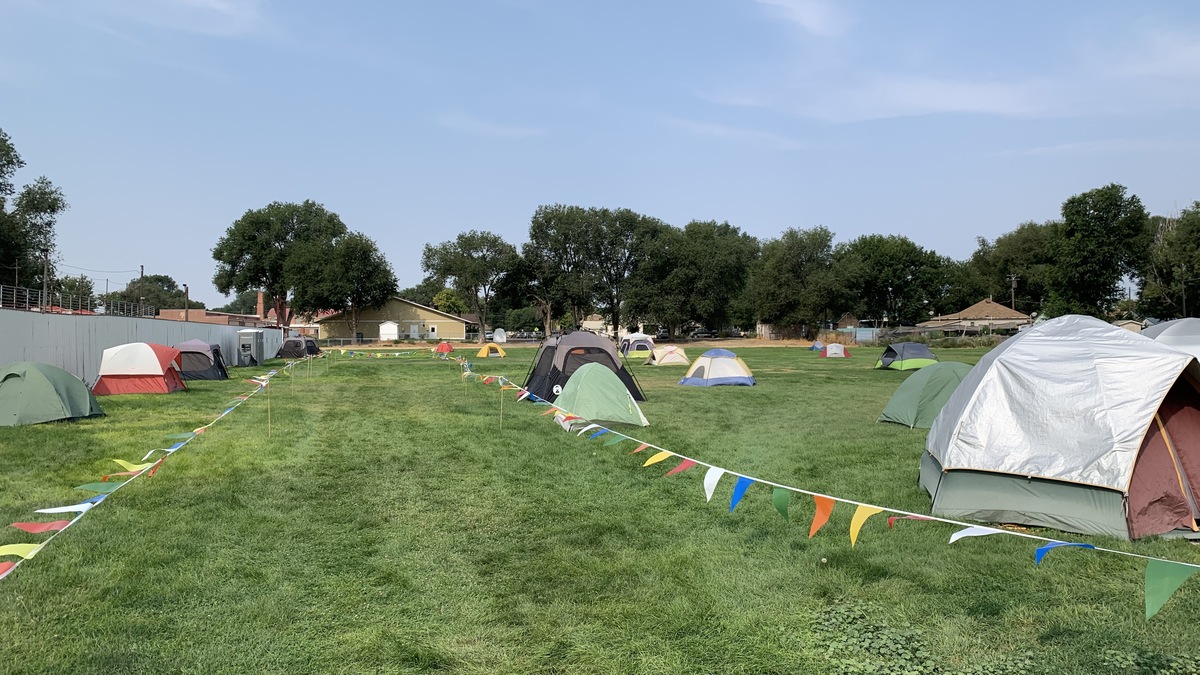 In a normal wildfire year, there might be 10 times as many tents clustered into a park like this one in Vale, Ore.

“That’s kind of 2020 summed up, right,” Cornelius said. “It’s just one more thing on top of everything else that you’re trying to do.”

Thousands of firefighters, crew bosses, contractors and other support personnel are now deployed to major wildfires in California and across the West. It’s the first real big test to whether federal and state COVID-19 safety protocols for wildland firefighting are working and are stringent enough.

There was no template fire managers could turn to for COVID, though they’ve at least had since March to prepare for it.

A main strategy is to treat crews like Cornelius’ as “family units,” like pods, traveling and staying together throughout the summer and fall which could make contact tracing easier.

In western Colorado, where the Pine Gulch Fire has become that state’s largest in history, night operations chief Kyle Cowan sees an upside, even amid so many added threats. They’re learning to be more efficient.

For one, he said, crews are accustomed to a big morning briefing where hundreds of people gather for an incident planning report. For the most part this summer, that’s now being done remotely, which is in some ways easier for Cowan because he doesn’t have to travel miles from the fire itself back to its incident command post in the Grand Junction area.

There have yet to be any major reported coronavirus outbreaks in the wildland firefighting community. But there doesn’t appear to be widespread testing either, only when they’re showing symptoms.

Fire camps, which traditionally can sprout into whole tent cities with vast, makeshift infrastructure, are still the biggest pinch point for potential exposure.

Preparing for a new normal

In eastern Oregon, about 400 firefighters have been deployed to the Indian Creek Fire, which has burned close to 50,000 acres of mostly rangeland. Fire managers say they’ve only had one suspected coronavirus case since the fire ignited earlier this month, but fortunately it turned out to be negative.

On a recent morning in Vale, Ore., deputy incident commander Lonnie Click surveyed the fire’s command post and accompanying camp at the town’s park. They were a skeleton of what you’d normally see.

“If this was a normal year you’d probably see twice as many of these white big tents, 20 times as many of those little [camping] tents,” he said.

Click, talking through a mask, said most of his firefighters are staying out in so-called spike camps closer to or on the fire line itself. Things are going okay, but not perfect, he said. This year’s new COVID safety protocols are widely supported but not always feasible in practice.

To further his point, he gestured to a nearby cluster of outhouses.

But Click said COVID-19 hasn’t hampered his crews’ ability to fight fires. The fear of firefighters being sidelined due to quarantines hasn’t really materialized, not yet anyway.

He said the biggest challenge right now is trying to change wildland firefighter culture, a very tight knit and small community. Crews like seeing everyone each morning in big groups, which isn’t happening. To make up for it, Click has been visiting as many crews as possible each morning out on the fire.

“I went out there and talked to the folks this morning, and I told ’em, we gotta figure out how to get used to this [COVID-19] because we’re going to do this again next year as far as I’m concerned,” Click said. “It’s not gonna be gone.”