Will Michigan Democrats Really Turn Out After a Virtual Campaign? 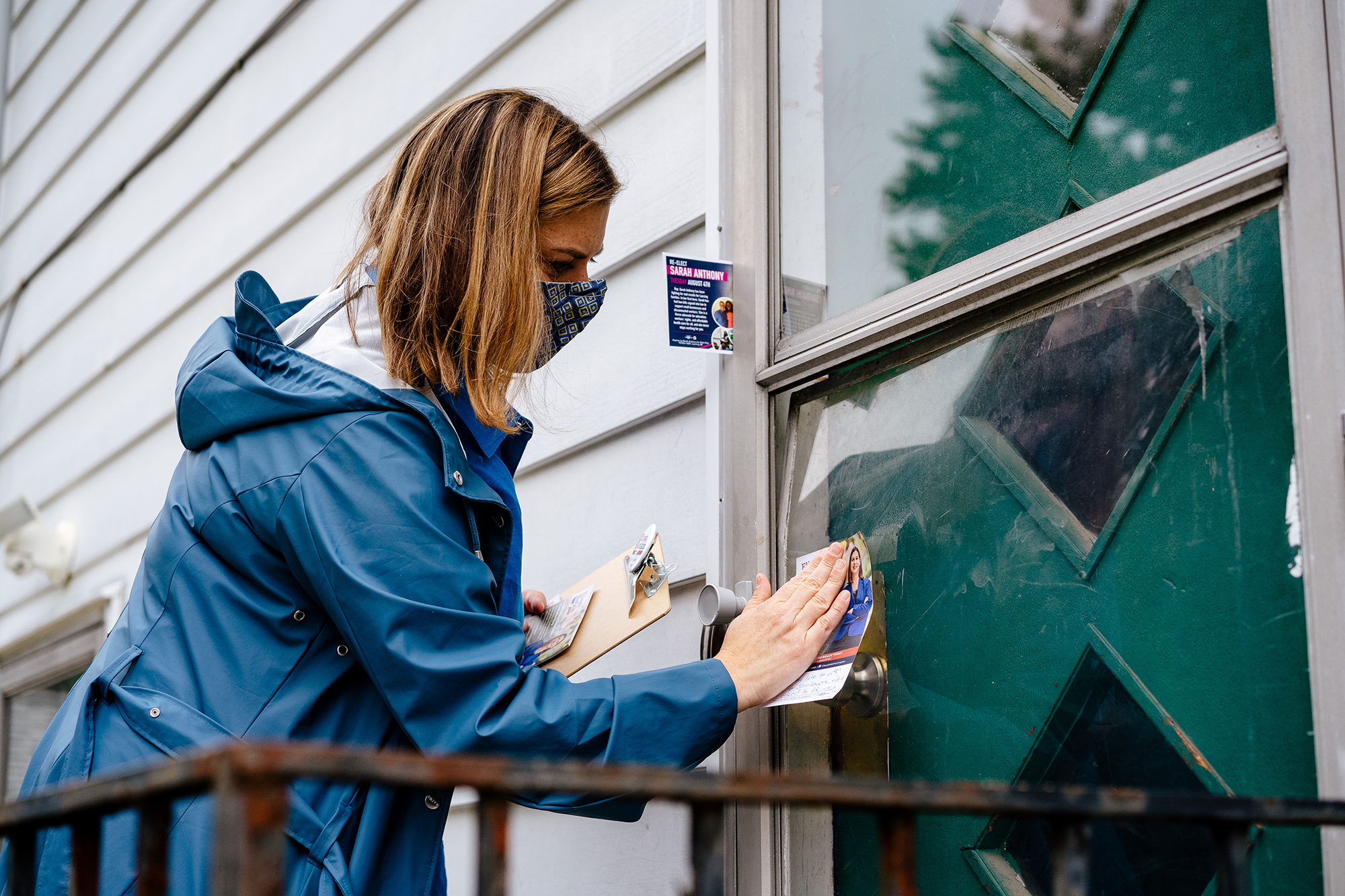 Slotkin tried to give a game performance. Speaking directly to the camera in the middle of the auditorium, which was live-streaming the event on Facebook, the congresswoman recounted her 2018 campaign, listed her first-term accomplishments and made the case for a return trip to Washington. I’m not sure how it came across to viewers at home, but those of us inside the room felt more like actors on the set of a movie about a campaign than attendees at a real-life rally. Slotkin nodded to the oddness, acknowledging that this was “a new way of campaigning” and announcing a search for volunteers to “engage your communities from the safety of your home.”

The scene was only slightly less bizarre two hours later in Livingston County. Because the second event was held beneath an open-air pavilion at a public park in Brighton, there were none of the awkward echoes from the hollow auditorium in Lansing. But a heavy rain drove residents from the park, making the handful of socially distanced people huddled under the pavilion feel even more withdrawn from the world. Visibly thrown by the lack of an audience, and the utter silence that greeted even her most impassioned remarks, the congresswoman recited the statistics from her 2018 campaign: 200,000 doors knocked on, 300,000 text messages sent, 1 million phone calls made. (There is no way of corroborating these numbers, though they do fall roughly within the range of outreach capacity for a well-funded congressional campaign.) She conceded that the ratio of personal contact to nonpersonal contact would grow all the more lopsided this year and openly solicited input from her constituents.

“There is no playbook for this,” Slotkin told the camera. “Creative ideas are not only welcome but needed.”

I watched the third and final event from my home 50 miles away. I was curious to see what Slotkin’s launch looked like from the other end of a laptop. It was her most comfortable performance. Unfortunately for Slotkin, it did not seem to draw much of a crowd either. The high-water mark for viewership was 148; even a month later, the archived clip had barely eclipsed 1,000 total views, an anemic figure given the investment Slotkin’s team has made into Facebook, using geotargeted “paid acquisition” technology to drive constituents’ eyeballs to her campaign page. Some spectators left affirming comments; when I clicked their profiles, however, I discovered that several of them lived not only outside of the district but outside of Michigan. When I checked the videos from Ingham and Livingston Counties, it was more of the same: lots of love from New York, D.C., Seattle and elsewhere.

A week later, Slotkin told me she was “happy” with the launch—but went on to characterize the day in ways that belied any sense of satisfaction.

“The last time when we kicked off in Rochester Hills, you know, we had 250 people stuffed into a little office. I had to stand on a bucket in a hallway because that was the only way to talk to the huge crowd. That’s just not possible now,” Slotkin said wistfully. “There’s no getting around it. I think I even mentioned this at one of the events: They’re quiet. There’s a lot of quiet, and I’m someone who responds to people’s energy.”

The “fundamental question” of the campaign that gnawed at her throughout the launch, Slotkin said, was this: “How do you create community and personal connections in an era of Covid?”

This was the subject of a lengthy senior staff call on Saturday, July 25. By that point, Slotkin’s team had produced an “AAR”—After Action Report—on the launch 15 days earlier. The results were mixed: Slotkin’s campaign had gained some voter contact information and enlisted a decent number of volunteers. But the campaign’s internal consensus matched my outsider’s assessment: The atmospherics were dismal, the message was flat, the candidate was shrinking and uninspired. In a word, Slotkin told her high command, the launch was “boring.”

The mandate for this call was twofold. The first objective was to focus the team’s attention on the persuadable voters concentrated in parts of the district where, according to their modeling, Slotkin could be most effective in limited time on the ground. The second objective was to breathe life into the campaign—and quickly.

Her team had spent the past several weeks sketching the plans for a “Township Tour,” which would take Slotkin to small communities across the district late this summer. As Slotkin’s campaign manager, Matt Hennessey, outlined the plans on the call, Slotkin repeatedly interjected. She made it clear she wanted no more indoor events; that her field organizers should scout not just outdoor locations but “public places” where people will congregate regardless of any announced political happening. The idea would be to capitalize on existing outdoor crowds wherever they gathered.

Slotkin issued an open casting call for ideas. What she heard was equal parts innovative and amusing. An art festival. A local golf tournament. Two concerts planned for opposite ends of the district. An amateur baseball showcase. A horse competition. Three different farmers markets. A drive-in movie theatre. A car show. A fruit festival. A putt-putt golf course. A special garbage day where people bring documents to a shared shredding truck.

Some of these concepts drew laughter; others sparked serious discussion. (The concept of “Shred Day,” as the boss called it, seemed alien to her staff.) Slotkin made clear—on the call, and later, during an interview—that she was fully invested in two particular ideas. One called for the campaign to advertise on the tops of pizza boxes, particularly in communities with large persuadable populations. The other envisioned Slotkin airing ads on the screens at gas station pumps across the district, putting her in front of voters who might otherwise never see her on the TV.

When presented with the tentative calendar of the Township Tour, which called for her events to be spaced out a week apart, from mid-August through mid-September, Slotkin balked. Time was not a luxury she would have in the months ahead; with a long recess expected in August, she said, the campaign should be jamming her schedule with at least two of these events per week. The closer they got to fall, Slotkin warned, the fewer opportunities they would have to take advantage of warm weather and organic outdoor crowds.

“Remember,” she said, “This is Michigan.”

If there’s one positive Slotkin can take from this political upheaval, it’s that her Republican opponent is even more disadvantaged than she is.

An incumbent, even an incumbent with just two years on the job, has a built-in baseline of volunteers, donors and name identification. A challenger, on the other hand, is often starting from scratch. This is one reason why national handicappers believe very few House seats will flip this fall: Challengers are being deprived of the opportunities and resources needed to assemble a real campaign infrastructure. (Ironically, the incumbent who faces the harshest headwinds, President Donald Trump, is not benefiting from his significant organizational advantages because he is the politician most associated with failure to contain the coronavirus itself.)

In the case of Slotkin, her leg up on the competition is all the more pronounced because of Michigan’s late primary. By the time it became clear, on the morning of August 5, that Slotkin’s opponent would be Republican Paul Junge, there were just 90 days remaining until the election. That might seem like an eternity for weary voters. But for a rookie candidate like Junge, who essentially purchased the nomination with his personal wealth but has no real ground game, it’s scant time to devise a viable strategy much less execute it.

“People want to evaluate you and your campaign in person, and when you can’t do that, it definitely retards what you’re trying to accomplish. One part of that is fundraising, but it’s more than fundraising. You need people to spread the word about you, help build that enthusiasm, be motivated to do more, to put on an event,” Junge told me. “A congressional district has about 730,000 people, give or take, and when you lose days, weeks, months—not having those opportunities to meet people and build a coalition—that makes it tough.”

In ordinary times, this might have made the case for Junge’s runner-up, Mike Detmer, to be the strongest challenger to Slotkin. Despite having none of Junge’s money, Detmer, a MAGA-style conservative, amassed the largest grassroots following in the primary. He did so believing Slotkin could be defeated only by someone who rivaled her presence in the district. “If you’re a generic Republican going against Slotkin, it’s a daunting task because of her ground game,” Detmer said. “Put it this way: In 2018, Elissa Slotkin door-knocked us twice in Howell—and we’re conservative Republicans. So, we knew her ground game in 2020 was going to be even better.”

Of course, given the way this election year has unfolded—and how Slotkin’s advantage in field operations will be somewhat neutralized—Junge figures to provide the stiffest test of any GOP candidate who sought the nomination, and for one reason: money.

A career journeyman, with stints as a prosecutor, television anchor and Trump administration official, Junge has raised some $ 775,000 for the campaign—two-thirds of which he contributed himself. (For purposes of comparison, Detmer raised less than $ 38,000.) The haul allowed Junge to run ads introducing himself during the primary, a down payment on the fall campaign. With the race now taking shape as a 12-week sprint, and with Junge having shown a willingness to spend big on himself, the GOP nominee’s best chance to beat Slotkin is by carpet-bombing the airwaves and dominating the digital ad space.

At Team Xbox we’re passionate about partnering with organization we truly believe in, that’s why we’re so energized about teaming up with National Breast...
Read more

"There have been moments where you watch him play and think 'this guy is absolutely brilliant'. "The natural talent is there without any doubt and...
Read more