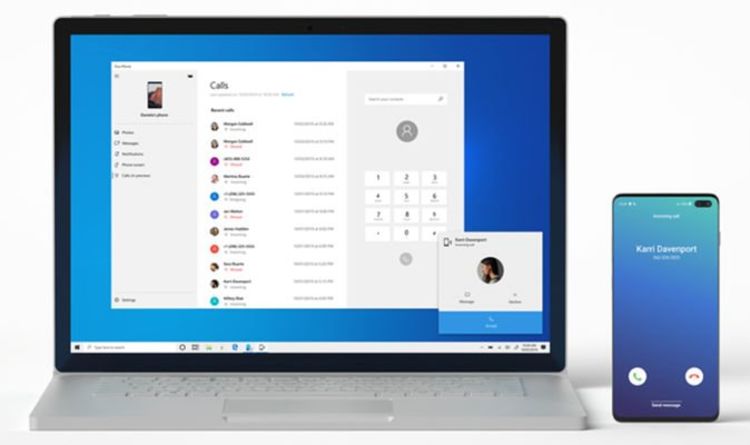 Microsoft has released a new preview build of Windows 10 to members of its Insider beta programme. Dubbed 18999, the software is an early version of Windows 10 20H1 – a substantial upgrade for the operating system set to debut during the first half of next year.

The new Windows 10 build introduces a huge new feature for Microsoft’s Your Phone app, a programme designed to improve the synergy between user PCs and Android devices, which that allows users to answer calls from their PC directly.

Apple offers a very similar feature – enabling its users to make and recieve calls from their desktop or laptop (as well as text messages) – but only if they own an iPhone. Microsoft is offering the same feature for any brand of PC, and any Android handset.

This means fans will no longer need to awkwardly rummage around in their pocket for their smartphone. Simply choose to accept or deny a call from a prompt that will appear on your Windows 10 device.

The ability to take calls on your PC was unveiled by Microsoft earlier this year at Samsung’s Unpacked event back in August.

Don’t have a Samsung phone? No problem. The feature will work on any device running Android 7.0 Nougat and onwards.

Explaining the new functionality, Microsoft said: “We first announced the Calls feature at the Samsung Unpacked event in August, and you saw a live demo at last week’s Surface event. Today, we’re excited to unveil the Calls feature to the Windows Insider community.

“No need to dig for your Android phone to answer your personal or work calls. You can now stay connected by simply answering (or not) your phone calls on your PC. Tap into your PC’s speakers, microphone, and large screen for a richer calling experience.”

With the new Call feature for the Your Phone app, Microsoft fans are able to answer or decline incoming calls, initiate phone calls and see their call history.

What’s more, users are also able to transition calls between their PC and smartphone.

The newest feature from Your Phone certainly cements Microsoft’s concerted effort to increase ties between Windows 10 and Android phones. Earlier this year the Redmond firm gave its app the ability to mirror Android phone notifications.

Available to all Windows 10 users – not just members of Microsoft’s Insider programme – the feature means you’ll never scramble to pull out your phone only to be disappointed with a throwaway notification ever again.

This feature, launched back in July, added to Your Phone’s functionality to a great degree. The app also allows users to respond to text messages, although unfortunately, this isn’t possible with third-party apps, such as WhatsApp. Although, many of these – including WhatsApp – offer web-based portals to send and receive texts from their computer.

Windows 10 build 18999 doesn’t just introduce changes to the Your Phone app though, it also makes a few tweaks to how users can move and resize a Cortana window.

Plus, the software also introduces a number of general changes, improvements and bug fixes. You can find a full list of changes introduced in 18999 here.

If you’re not a member of the Windows 10 Insider programme, signing up is easy. Although you should be aware early software versions typically feature more bugs than final ones.

Alternatively, you can always wait for a stable edition of Windows 10 20H1 to launch in the first half of next year where the new Your Phone function will debut.