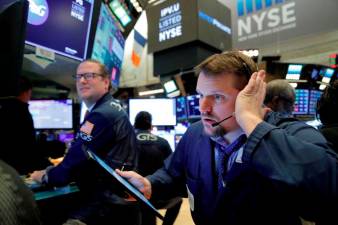 LONDON: World stocks were set on Friday for their worst week since the 2008 financial crisis, with coronavirus panic-selling hitting nearly every asset class and investors fretting that central bank action may not be enough to soothe the pain.

European stock markets were slightly higher on Friday on hopes governments will step up spending, but only after several sessions of sustained, heavy losses as investors faced the possibility of a global recession that could be prolonged.

The MSCI world equity index, which tracks shares in 49 countries, hit a three-year low in Asian hours and is down 16% this week so far — its worst run since October 2008 when Lehman Brothers’ collapse triggered the global crisis.

“Markets are quite prepared for a period of falling output. The real fear is that you get second-round effects that result in a nastier, longer recession in the global economy,” said Investec economist Philip Shaw.

“That is going to be very difficult to escape from given the monetary pedal is very close to the floor in many jurisdictions.”

MSCI’s main European Index was up 2.7% at the open, after having fallen more than 20% over the past week.

Earlier, Japan’s Nikkei fell 10% before paring losses to close 6% lower. Australia’s S&P/ASX200 had its wildest trading day on record, falling past 8% before surging in the last minutes of trade to settle 4.4% higher at the close.

MSCI’s broadest index of Asia-Pacific shares outside Japan wobbled 0.1% higher by late afternoon after falling more than 5% in morning trade.

The slight recovery came as central banks from the United States to Australia pumped liquidity into their financial systems and as hopes grew that U.S. Democrats and Republicans could pass a stimulus package on Friday.

There was no such recovery in Italian government bonds, with the benchmark 10-year yield — which moves inversely to price — rising another 16 basis points in early trade.

The yield had leapt by 55 bps on Thursday — its worst day since November 2011, near the peak of the euro zone debt crisis — after the European Central Bank kept rates steady and put the onus firmly on governments, sending markets into a tailspin.

Italy is one of the worst-hit countries in Europe from the spread of coronavirus, with the death toll shooting past 1,000 people and the government ordering blanket closures of restaurants, bars and almost all shops.

Oil steadied on Friday, after having dropped 7% on Thursday on U.S. President Donald Trump’s surprise travel ban and on a flood of cheap supply coming into the market from Saudi Arabia and the United Arab Emirates.

Major currencies stabilised after furious dollar buying overnight, with the euro finding a footing around $ 1.1200 and the Aussie AUD=D3 recovering to $ 0.6300. – Reuters