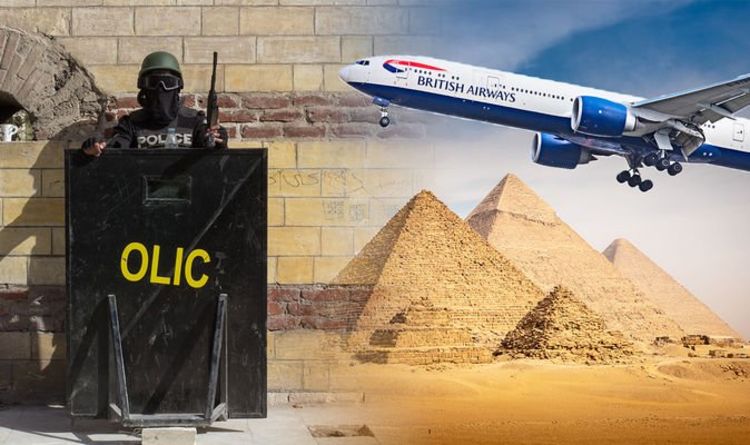 World War Three could become a horrifying reality as violence brews between the USA and Iran. Tensions rocketed after the White House ordered the airstrike which killed Iranian General Qasem Soleimani. Iran has since threatened “severe revenge” – so how safe is travel to Middle Eastern holiday destinations such as Egypt?

“Following the death of Iranian General Qasem Soleimani in a US strike in Baghdad on 3 January, the incident has led to increased tensions in the region,” said the FCO.

“There is a possibility of an increased threat against Western interests and the security situation could worsen with little warning.

“You should remain vigilant and keep up to date with the latest developments.”

Terrorists are deemed as “very likely” to try to carry out attacks in Egypt.

The FCO stated: “There is considered to be a heightened threat of terrorist attack globally against UK interests and British nationals, from groups or individuals motivated by the conflict in Iraq and Syria.”

Travel to Egypt comes with many warnings about where you should not go in the country.

The FCO advise against all travel to the Governorate of North Sinai.

It also warns against all but essential travel to: the Governorate of South Sinai, except the area within the Sharm El Sheikh perimeter barrier, which includes the airport and the areas of Sharm el Maya, Hadaba, Naama Bay, Sharks Bay and Nabq.

Also to avoid is the area west of the Nile Valley and Nile Delta regions, excluding the coastal areas between the Nile Delta and Marsa Matruh.

The ban was put in place in 2015 after a Russian airliner was bombed killing 224 people onboard.

It was thought that security procedures at Sharm El Sheikh airport were not tight enough, allowing for the bomb to be smuggled on board the plane.

For the last four years, the British and Egyptian governments have been working closely together to work on increasing safety precautions.

ByFlights in Business Class are the aim of many holidaymakers but unfortunately, budgets don't always stretch to such luxury. The good news is, these...
Read more