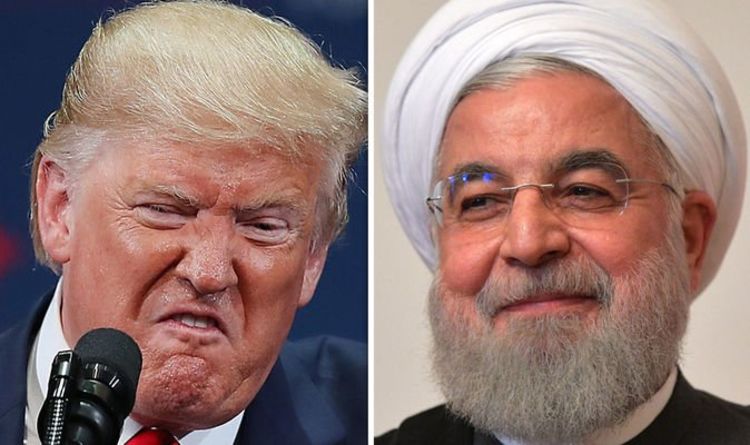 Habibollah Sayyari, the coordinating deputy of the Islamic Republic of Iran Army issued the chilling warning – most likely targeted at the US – in a interview with Tasnim news agency on Saturday. It comes as Iran paired-up with China and Russia in a triadic naval exercise in the northern Indian Ocean and Gulf of Oman.

Talking to reporters, he said: “Many countries are definitely seeking to know what the matter is.

“A joint war game is no joke, and this is no joking matter for us either. We will hit whatever spying craft in the war game zone, be it watercraft or aircraft, as we have proved having such a capability in the past.”

The joint naval exercise has been dubbed the ‘Naval Security Belt’.

Participants are expected to engage in drills fighting terrorism and piracy, as well as providing regional security.

The drill will last four days and will include the three nations sharing the experience of naval rescue operations.

It comes as President Trump boosts the US military presence in Saudi Arabia by sending extra troops, as global tensions rise.

JUST IN: Iran threat: China and Russia to hold naval drills with Iran

Part of the operation will be held in the sensitive area of the Gulf of Oman, which is connected to the Strait of Hormuz.

Every day, around a fifth of the world’s crude oil supply – 20 million barrels – passes through the Strait.

Iran’s Revolutionary Guard has a heavy presence in the busy 21-mile wide channel.

The waterway was the scene of clashes between Iran and foreign tankers this year.

The exercises will increase the already tense atmosphere between Iran and the US.

Iran’s economy has been crippled as a result of sanctions imposed by President Trump.

Following Trump’s exit from the Iran nuclear accord and slapped on the sanctions, Tehran blamed the other signatories for failing to protect its economy.

The deal, known as the Joint Comprehensive Plan of Action (JCPOA), was struck in 2015 and hailed as a groundbreaking success that would make the world a safer place.