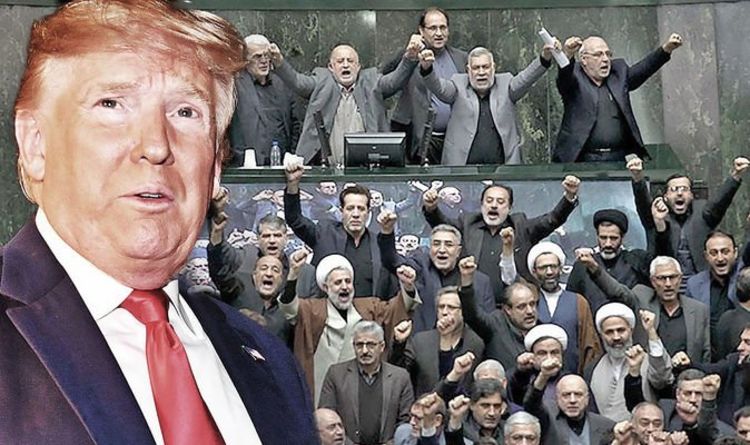 The emergency motion was passed during an open session of Iran’s parliament on Tuesday morning. Iran’s Tasnim News Agency reported the motion had already been signed by 206 MPS. According to one of its articles, the Iranian administration is obliged to provide the Quds Force with €200million (£170million) to strengthen the defence power of forces.

The General was killed in a US drone strike at Baghdad airport last week.

His body has now arrived in his hometown of Kerman to be buried.

A vast number of people were seen in the streets of Kerman, south-eastern Iran, ahead of General Soleimani’s burial.

Tuesday’s ceremonies mark the end of a three-day mourning period for the Quds Force commander.

Al Jazeera’s Assed Beig said: “People on the streets are calling for revenge.

“Emotions are very high; it will be very difficult for the government not to listen to the thousands and thousands of people that are on the streets.”

On Monday, Ayatollah Khamenei led prayers at the general’s funeral in Tehran, at one point weeping over his coffin.

Unconfirmed estimates from Iranian state television put the number who took to the streets of Iran’s capital alone as “millions”.

He added: “I don’t know what that letter is. We’re trying to find out where that’s coming from, what that is.”

Iran’s demands for US forces to withdraw from the region gained traction at the weekend.

Iraq’s parliament passed a resolution calling for all foreign troops to leave the country.

Following this, Iran’s Foreign Minister Mohammad Javad Zarif received a ban from entering the US after his visa was refused.

The growing crisis between Iran and the US is set to be discussed at the meeting.

Under the 1947 UN “headquarters agreement”, the United States is generally required to allow access to the United Nations for foreign diplomats.

However, Washington says it can deny visas for “security, terrorism and foreign policy” reasons.

A spokesperson for Iran’s mission to the UN said: “We have seen the media reports, but we have not received any official communication from either the US or the UN regarding Foreign Minister Zarif’s visa.”

Although it is unclear how or when Iran may respond, any response is likely to come once the mourning period comes to an end.

US President Donald Trump has defended the killing of Soleimani and threatened more retaliatory actions if Iran targets US citizens or assets.