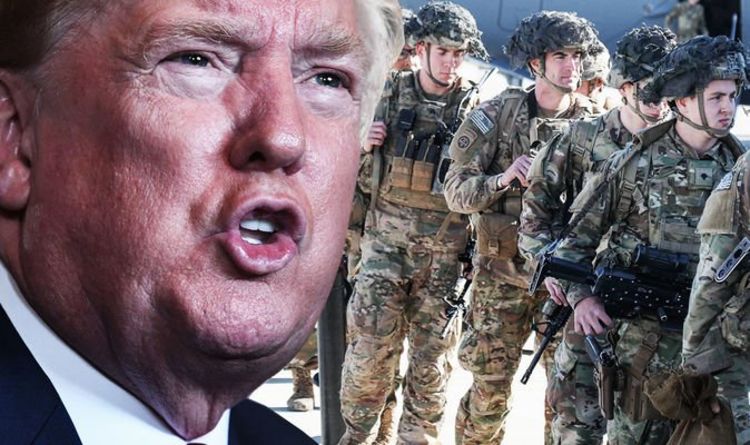 The US President also warned Iran that it “will pay a very big price” for any damage or loss of life to US citizens in the embassy. Trump said: “This is not a warning, it is a threat.” On Tuesday the US Defence Secretary, Mark Esper, confirmed that 750 paratroopers were already on their way to the Middle East.

He added that additional troops were preparing to deploy over the coming days, as the US ramps up its response to the crisis.

Three US defence officials told the US TV channel Fox News that the deployment would involve 4,000 soldiers.

Mr Esper said on New Year’s Eve: “This deployment is an appropriate and precautionary action taken in response to increased threat levels against U.S. personnel and facilities, such as we witnessed in Baghdad today.”

In a further tweet, the Defence Secretary wrote: “The United States will protect our people and interests anywhere they are found around the world.”

Secretary of State Mike Pompeo called the outrage an act of “state-sponsored terrorism” that was “abetted by Iranian proxies” in an interview with CBS News.

The US compound in Baghdad was attacked by some 6,000 demonstrators furious over the deaths of militia members in US air strikes.

The raids were in retaliation for last week’s 36-rocket attack which killed an American contractor and injured several others at a base in Kirkuk, 170 miles north of Baghdad.

JUST IN: Iran vs US: Ayatollah condemns US airstrikes and warns Trump

In the ensuing chaos 62 of the Iraqi assailants were injured, while no US citizens were reported hurt.

The US President strongly condemned the attack and pinned the blame squarely on Iran.

Trump said: “Iran killed an American contractor, wounding many. We strongly responded, and always will.

“Now Iran is orchestrating an attack on the U.S. Embassy in Iraq. They will be held fully responsible.