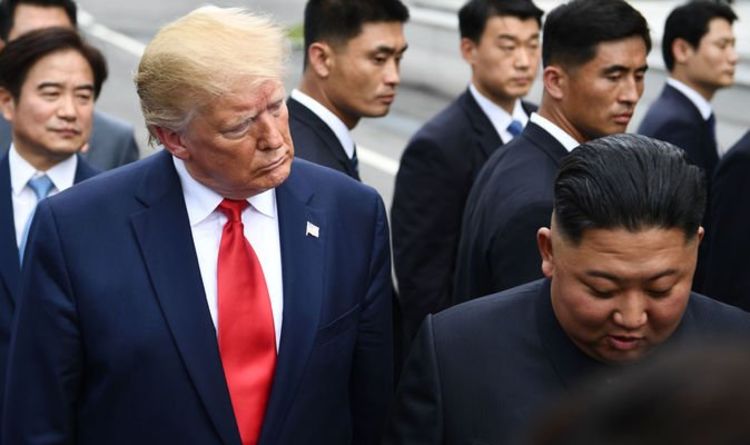 The US has made clear they will employ any economic or military action if provoked in this manner with O’Brien referring to the many “tools in its tool kit” in an interview on ABC’s “This Week.” “We’ll reserve judgment but the United States will take action as we do in these situations,” he said. “If Kim Jong Un takes that approach we’ll be extraordinarily disappointed and we’ll demonstrate that disappointment.”

North Korea has requested a new initiative to iron out differences over Pyongyang’s nuclear weapons program.

It had warned the US they may receive an unwanted “Christmas gift” if they failed to meet its expectations.

Mr O’Brien said the United States and North Korea had open channels of communication but did not elaborate.

He said Washington hoped North Korean leader Kim Jong Un would live up to his commitments to denuclearise the Korean Peninsula.

Citing the overwhelming military might of the US, Mr O’Brien said: “There’s a lot of pressure that we can bring to bear.”

The promise of a surprise runs in the face of the good personal relationship Trump is said to have had with Kim, which could now be in jeopardy according to Mr O’Brien.

“But we will have to wait and see. We’re going to monitor it closely. It’s a situation that concerns us, of course.”

“So what I want to see, I want to see is the leader of North Korea, Kim Jong Un, make a full declaration of his nuclear weapons program and make a real commitment to start to dismantle that,” he said.

“We haven’t seen any of that during the Trump administration.”

The rising tension come as the influential think-tank the Atlantic Council ranked North Korea’s probable escalation of missile tests, spiralling nuclear proliferation, and a new financial crisis worse than that of 2008 as among the top 10 risks of 2020, with the world consequently lurching towards “total dysfunction”.

Experts Robert A Manning and Mathew J Burrows have suggested the turmoil would be such that the coming decade will resemble the 1930s.

Mr Manning – a resident senior fellow with the Scowcroft Center for Strategy and Security (SCSS), and Mathew J Burrows, the director of the Atlantic Council’s Foresight, Strategy, and Risks Initiative, also attached to the SCSS, revealed their predictions in an analysis published on the organisation’s website.

They wrote: “2019 did not offer any great surprises or ‘Black Swans,’ but the fragile world order did move further down the path of unravelling – 2020 will likely bear more resemblance to the 1930s, as some of the developments which did not reach a denouement in the past year cross the finish line.

“This may include a shift from the mere corroding of multilateral institutions and US alliances toward total dysfunction.”

“Kim pursues the ‘new path’ he warned of in his end-of-year ultimatum. Kim’s goal is to be a de facto nuclear state like Israel or Pakistan, to be accepted as a normal nation.

Facebook
Twitter
Pinterest
WhatsApp
Linkedin
ReddIt
Email
Tumblr
VK
Previous articleCruise secrets: How cruises trick you into thinking your ship cabin is bigger than it is
Next articleRebecca Long-Bailey savaged after revealing she is ‘considering’ Labour leadership bid