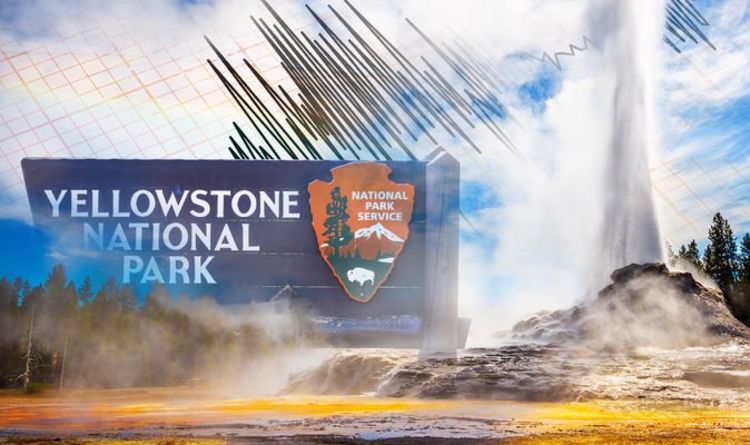 More than 60 years have passed since 1959’s magnitude 7.3 Hebgen Lake Yellowstone earthquake. The earthquake caused 28 fatalities, with most of these a result of a large landslide, as well as violently triggering hundreds of hydrothermal features.

Because of this infamous earthquake and the thousands of others recorded annually by USGS, experts know Yellowstone remains seismically active and capable of producing large, damaging earthquakes.

USGS wrote in a statement: “Because of their rate of occurrence, large earthquakes represent one of the greatest geological hazards in the area, much more so than a volcanic eruption.

The USGS 2018 nationwide long-term assessment revealed how Yellowstone National Park has some of the highest seismic hazard values in the Intermountain West.

READ MORE: ‘Blobs’ beneath Pacific and Africa could coat Earth in 100km of lava

Last year proved to be an unremarkable year of seismic activity at Yellowstone.

The USGS said: “Overall, 2019 was a year of diminished seismicity, with 1217 located earthquakes – well below the annual average of 1,500 to 2,500 earthquakes – and seven events greater than magnitude three.

“For the first time in several years, there was no significant uplift in the Yellowstone area during 2019.

“The caldera continued to subside, as it has since 2015, and the area around Norris Geyser Basin transitioned from no deformation to subsidence in September 2019.”

Steamboat geyser has, however, broken the record for the most eruptions in a single year.

With three eruptions in December, Steamboat tallied 48 blasts in 2019, breaking the record of 32 eruptions in 2018.

One caveat in these numbers is USGS we are not locating every earthquake occurring in Yellowstone.

The ability to record and locate an earthquake is directly related to the number and distribution of seismometers in the region.

When an earthquake happens, seismic energy propagates out in all directions, but that energy lessens as it travels away from the source.

To get a location and an origin time for an earthquake, researchers are required to record the event on at least four stations.

Consequently, it is difficult to record and locate very small earthquakes without a dense seismic array, as the energy from such small quakes dissipates too rapidly to be recorded across the seismic network.