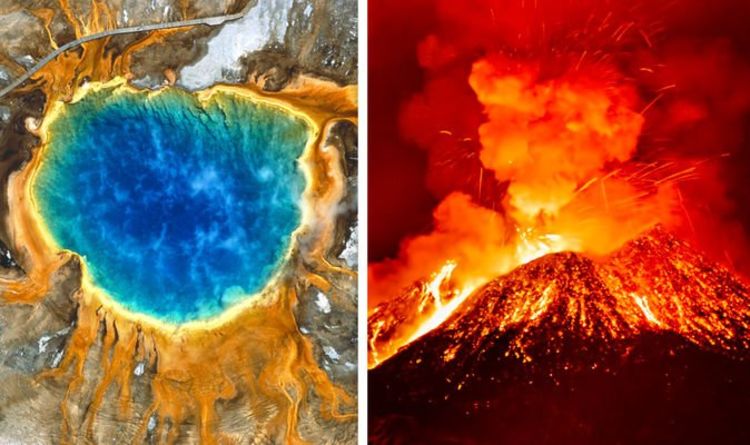 According to the US Geological Survey (USGS), Yellowstone’s last major blasts went off about 640,000, 1.3 million and 2.1 million years ago.

The most recent eruption sculpted the modern-day Lava Creek Tuff – a geological formation stretching across Wyoming, Montana and Idaho in the northwestern US.

It is, however, hard to predict what would happen if the US supervolcano decided to eruption for the fourth time.

And according to one scientist, another Yellowstone eruption could come much sooner than expected.

Ron Smith, a former professor in California, warned there is a chance Yellowstone will blow again in the future.

Speaking during a lecture at Dixie University in Utah, the scientist argued there is no way to predict with any certainty when this will happen.

He said: “Yellowstone has gotten a lot of publicity because of the severity of a supervolcano and the effect it would have on the Earth.

“We cannot say that Yellowstone is overdue. It is probably going to blow again but it could well be 500,000 years from now or a week from Tuesday.”

However, according to the USGS, the probability of another Yellowstone super-eruption is “extremely low” for the foreseeable future.

Is Yellowstone volcano overdue another eruption?

With only three major blasts under its belt, geologists do not believe there is any evidence to suggest Yellowstone erupts like clockwork.

The USGS said: “The three eruptions occurred 2.1 million, 1.3 million and 0.64 million years ago.

“Again, the last eruption was 0.64 million years ago, implying that we are still about 90,000 years away from the time when we might consider calling Yellowstone overdue for another caldera-forming eruption.

“Nevertheless, we cannot discount the possibility of another such eruption occurring sometime in the future, given Yellowstone’s volcanic history and the continued presence of magma beneath the Yellowstone caldera.”