Yellowstone volcano: Warning to half the US over ‘mother of ash clouds’ revealed 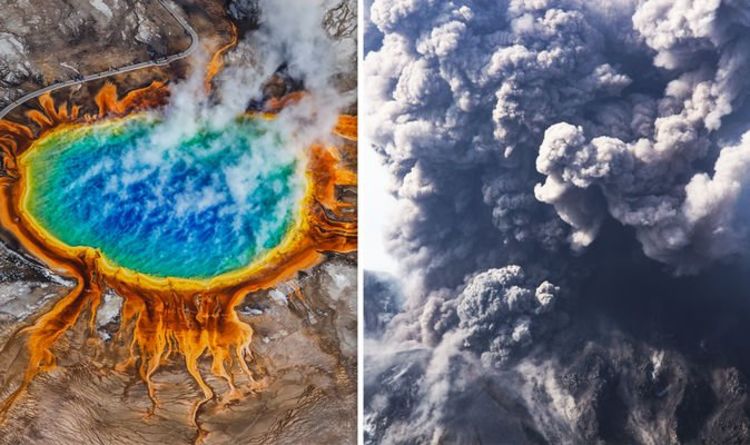 The Yellowstone caldera is an active supervolcano beneath the states of Wyoming, Idaho and Montana, which has experienced a supereruption three times in history: 2.1 million years ago, 1.3 million years ago and 640,000 years ago. This had led some to claim another is overdue, but, the United States Geological Survey (USGS) is constantly monitoring the volcano for signs that such an event is on its way. Amid the speculation, Naked Science’s “Supervolcanoes” documentary revealed what would happen on that dreaded day.

The narrator said in 2013: “Within an hour of a Yellowstone supereuption, pyroclastic flows could race across the countryside and engulf the Valley of Jackson Hole and Livingstone, some 50 miles away.

“Within a 60-mile radius, 90 percent of any remaining people would be killed, a few blown to pieces in the initial blast.

“Most would suffocate in the heat of pyroclastic flows, but this would just be the beginning.

“Blowing across the states would be the mother of all ash clouds, an aerial mountain of deadly particles and debris.”

The series went on to reveal what would happen to the ejected ash.

It added: “Yellowstone National Park is the site of a recurring supervolcano – an eruption so large, that if it happens again it would destroy nearly everything within 60 miles.

“The Yellowstone supereruption could throw ash 15 miles into the atmosphere, the fallout could cover half the US.

“Three days after the eruption, the skies would be dark and deadly.

“From scientists’ predictions, we have pieced together a picture of the country after three days of ashfall.”

“As far away as Salt Lake City and Denver.”

While the threat of an eruption remains a reality, the USGS has previously put minds at ease regarding “overdue” claims.

Yellowstone Volcano Observatory’s Scientists-in-Charge Jacob Lowenstern said in 2014: “When you see people claiming it’s overdue, usually the numbers they come up with say the last eruption was 640,000 years ago, but it erupts every 600,000 years.

“If you average those numbers you come up with something that’s over 700,000 years.

“So, in reality, even if you tried to make this argument, it wouldn’t be overdue for another 70,000 years.”