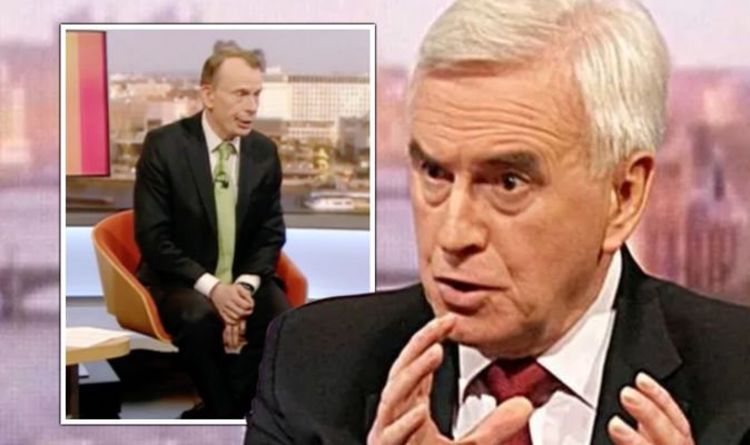 Mr McDonnell was on the BBC’s Andrew Marr Show on Sunday, ahead of the Government’s Budget 2020 announcement on Wednesday next week, in what is expected to be his last-ever appearance on the programme as Shadow Chancellor. Host Mr Marr quizzed Mr McDonnell on comments he made in the past about wanting to overthrow capitalism – noting the Labour Party chief had failed in that regard.

Mr Marr said: “You used to say that your hobby was fermenting the overthrow of capitalism.

Mr McDonnell replied: “I have taken, I think, our party – and the country – to a certain stage in the debate about the future of our economy.

“Even the Tories, now, are having to invest on a scale that they never wanted to. We have forced them into addressing some of these issues. Even though they are doing it in a way which is scant.”

But Mr McDonnell attempted to deny the claims, saying: “We have got business investment flat-lining. We have got a 0.3 percent productivity crisis over the last ten years.

“And we have got four million in insecure work. And at the same time, we have got inequality and poverty on a scale we have never seen before in this country.

“It is not working for those four million children living in poverty. There are 700,000 people who have died on our streets homeless.

Mr McDonnell also used his appearance on the programme to rail against the Government’s investment policies ahead of next week’s Budget.

Speaking on BBC One, he said: “There are lots of lessons that we’ve got to learn, as you said the emphasis that you put is a bit more, it’s nowhere near the scale we need.”

He added: “The worry that I’ve got is that this Budget will not deliver what we need in terms of the NHS.

“There are long-term issues that have to be addressed and this crisis is made worse by not addressing those long-term issues. We need funding for the NHS, full funding, not just to cope with this virus.”