‘You get made fun of’: Trump campaign office shuns masks, social distancing 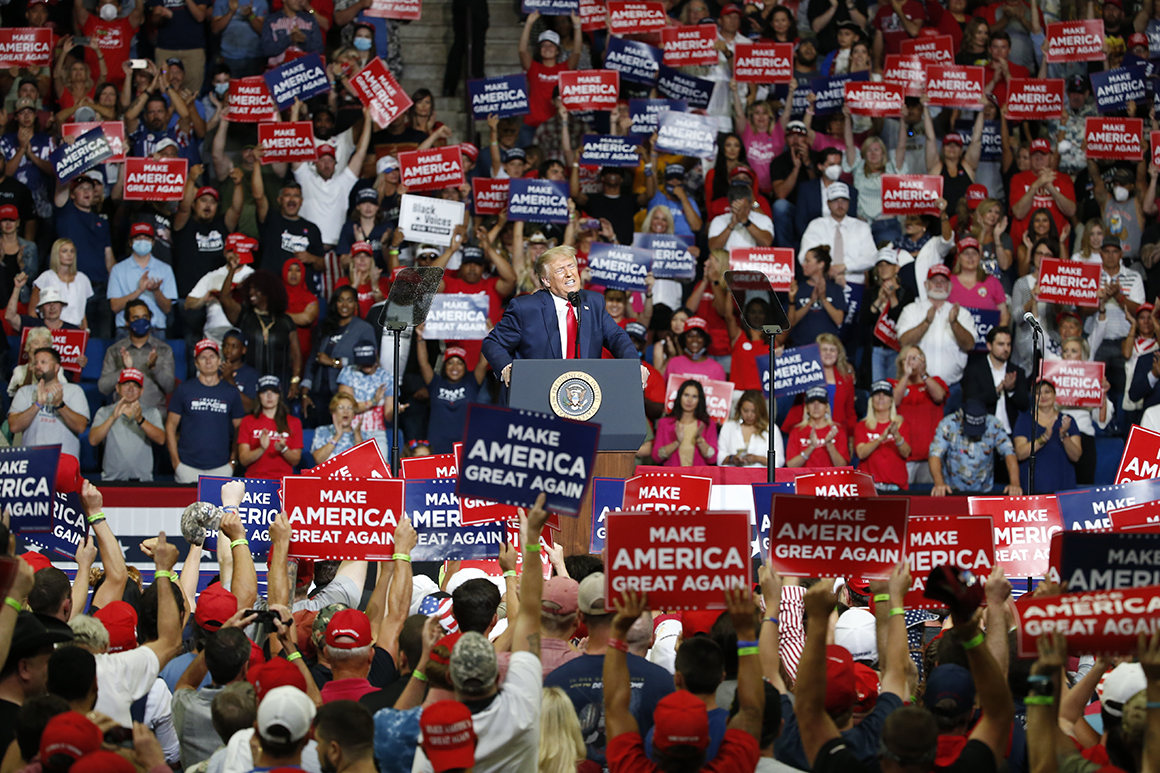 Facing no threat of enforcement, the Trump campaign has continued to make its own rules on coronavirus protections, said the individuals, who requested anonymity to speak freely. For instance, staff have been told to wear masks outside the office, in case they’re spotted by reporters, but they’ve been instructed that it’s acceptable to remove them in the office, the individuals said, adding that staff also publicly joke about the risk of coronavirus and play down the pandemic’s threat.

“You get made fun of, if you wear a mask,” said one person. “There’s social pressure not to do it.”

The most recent scare: Kimberly Guilfoyle, a top fundraising official for the campaign and the girlfriend of President Donald Trump’s oldest son, tested positive for coronavirus last week. While Guilfoyle had been around campaign staff at recent events, she had been an infrequent visitor to the headquarters, said one individual with knowledge of the situation.

Citing evidence that the coronavirus can be rapidly spread in enclosed spaces, the Centers for Disease Control in May instructed businesses and other organizations to implement social distancing and other protections for employees, like using partitions. Northam also has repeatedly issued orders that organizations must modify office spaces and encourage telework, and the governor on June 30 reiterated that there is a Virginia-wide requirement on wearing face coverings in indoor spaces.

The Trump campaign defended its approach to office safety.

“The campaign takes the health and safety of our staff very seriously,” spokesperson Tim Murtaugh told POLITICO in an emailed statement. “We have enacted numerous safety measures above and beyond what most private employers consider, at the expense of the campaign, including weekly deep cleaning, daily temperature checks in the office for staff and guests, widely available masks and PPE, and testing of staff both before events and before returning to the office.”

Murtaugh did not respond to questions about when the deep cleanings began, why the use of masks and social distancing was limited or how many campaign staff had been sickened.

Trump had planned to hold a rally on Saturday in New Hampshire, where the campaign was prepared to ask attendees at the largely outdoors event to wear masks, distance from each other and use hand sanitizer, officials have told reporters. That rally was postponed on Friday, with officials citing risk of bad weather.

The Trump campaign’s internal posture toward coronavirus mirrors Trump’s own recent disregard for the outbreak, with the president publicly playing down the threat and the White House moving to scale back use of masks for visitors. The president’s poll numbers have plunged as the virus has surged — with more than 3 million confirmed cases and more than 125,000 confirmed deaths in the United States — and the Trump campaign has sought to shift attention away from the ongoing pandemic.

That attitude spilled into public view when Pence posted his picture with campaign staff last month. The photo was immediately condemned by Rep. Don Beyer (D-Va.), who represents Arlington, and other Democrats who said that the gathering violated Virginia public health orders. Pence promptly deleted the photo.

The Trump campaign did not respond to questions about the gathering or why Pence deleted the photo.

Parisa Dehghani-Tafti, the Commonwealth’s Attorney for Arlington County, said that the campaign violated Virginia public health orders but announced last month that she dropped the inquiry after learning that the state’s Department of Health was responsible for enforcing the orders. The Virginia Department of Health did not respond to requests for comment.

Dehghani-Tafti told POLITICO this week that she wasn’t aware of any efforts by Virginia officials to enforce safety protections at the Trump campaign’s Arlington headquarters.

“I remain focused on the health and safety of all Arlingtonians and continue to encourage all to social distance, wear face masks, avoid large gatherings and maintain a rigorous regimen of hand washing,” Dehghani-Tafti added.