Your guide to winning Solo FNCS – Tips and Tricks

Take a peek at our newest video revolving around the solo meta and self improvement!

We cover five central topics in the video that you must master when playing in a Solo environment. Here’s what we know:

Including this one first because it’s probably the most important thing you can walk away from this guide with. Although you might be playing Solos, you can take advantage of your opponent’s similar need to rotate

Rotating alone is a death wish; anyone in the safe zone is looking for free picks (aka you if you don’t follow these tips)

Plus, if you let your opponents rotate in front of you, you can shoot them to build for you. Sometimes, it can net you a free frag, which can be the difference between qualifying for the next round or not

Take a look at UnknownArmy using this exact strategy

Avoid confrontation in the early game if possible

If you ask the pros, they’ll tell you the same thing. Why? Because the risk isn’t worth the reward. Fighting in the early game yields the highest level of RNG and will lead to getting eliminated often enough where you won’t have enough games to play out the whole 3 (or 2) hour block

The solution? Simply disengage when possible. Unless you have a distinct advantage in the situation, pulling away and playing for endgame is never a bad play

Side note – if you ever wonder why pro players have 50+ players at the first moving zone… this is why. Fighting against other elite players is a 50/50 (at best), and they know that. Play endgame against people of your skill level for the best results

Always look for opportunities to take height (the smart way)

The general “rule of thumb” for taking height in the end game is as follows:

Sometimes, you’ll be in a good position to take height. For example, the existing height is suuuuper high up and you can shoot him out. Or height is being contested on edge and you can again shoot them all down

Other times, you’ll have to assess your assets when the zone is too small to simply “shoot” a player out from across the zone. Take a look at how Clix takes advantage of his RPG to win the high ground battle on low materials in the Solo FNCS Invitational

In the midgame, prioritize elevation over position in circle

Sometimes being in the center of zone isn’t the most ideal play. You’re more vulnerable than you think. The entire lobby has an angle on you and can easily groupthink their way to your demise

I suggest you start prioritizing basing up on hills or large buildings; it’s easier to go down than climb up. With that said – take a look at this zone and ask where you would like to base up (if you could rotate anywhere risk free) 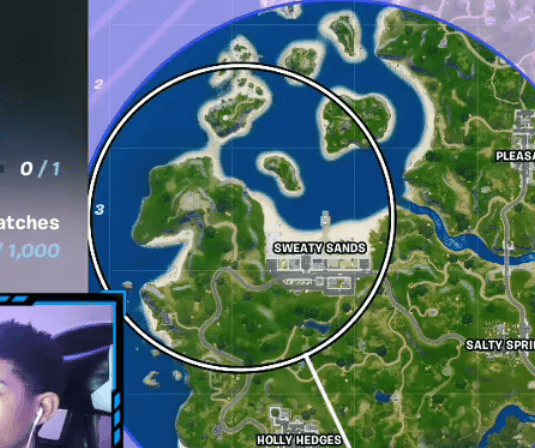 If you said center zone… reread the previous paragraph and get back to me. I’d play closer to the edge on the northwestern hills. It’s the soft side of zone in addition to the mountain to chill on

Protect yourself by overbuilding

In solos you only need to kill 1 opponent for a material refresher as opposed to wiping a whole team in order to get their loot. Only way you’ll secure these solo kills is by using your builds to take piece control and dominate the fight

The saying “it takes money to make money” is the same in Fortnite. It takes resources (materials, ammo, heals, etc.) to make resources. Don’t shy away from making big plays – you’ll often get big rewards

If this guide was useful to you, make sure to follow us on Twitter for more competitive updates!