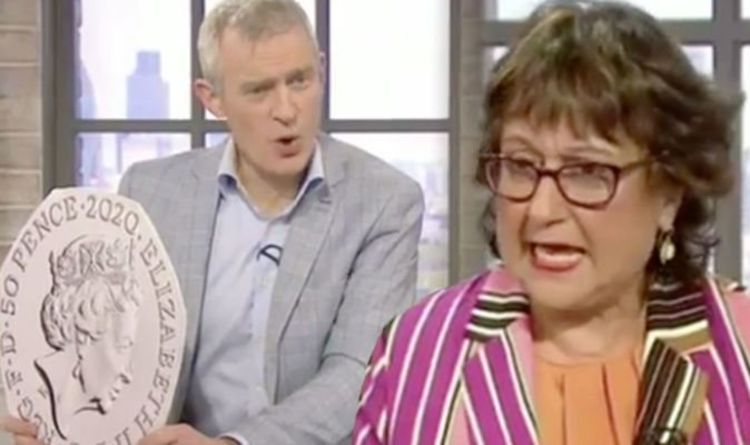 Brexit has been a divisive issue since the European Referendum was held in 2016 and after three years of hurdles, the UK is officially leaving the EU this Friday. Speaking on Channel 5 chat show Jeremy Vine today, Remainer Yasmin Alibhai-Brown hit out at the announcement a special 50 pence coin will brought into circulation, stating the decision is “humiliating”.

Chancellor Sajid Javid, 50, revealed over the weekend the Brexit coin would be inscribed with the date which the UK leaves the EU.

The words “Peace, prosperity and friendship with all nations,” will also feature on the commemorative emblem.

However, not everyone is happy with the three million coins which will enter circulation on Brexit day.

With the panel divided on Jeremy Vine’s, 54, chat show, Alibhai-Brown voiced her opposition as the decision to leave is being rubbed in Remainer’s faces.

READ MORE: Real reason Britain has ‘always been odd one out’ in EU

Clashing with fellow panellist Angela Epstein, the Remainer said: “Do not humiliate the losers and that is what’s happening.”

Hitting out at those who voted to leave, Alibhai-Brown continued: “And it’s very interesting. You won and you’re still this cross and you still need to rub our noses in it?”

Defending the decision, Epstein replied: “It’s not rubbing your noses in it – it’s commemorating a decisive election…”

Before she could proceed, her fellow guest remarked: “A divided nation,” to which the broadcaster hit back once more.

Although the date has been set to leave, the European Parliament is expected to give the go ahead on the official agreement later this week.

Prime Minister Boris Johnson, 55, has already signed the treaty given he won a majority for the Conservatives back in December.

As well as a coin entering circulation, the Tory Party leader has unveiled plans to light up Westminster in red, white and blue.

The former Mayor of London said: “Leaving the European Union is a turning point in our history and this coin marks the beginning of this new chapter.