'You're wrong!' IDS fumes at TV host's interruptions in explosive... 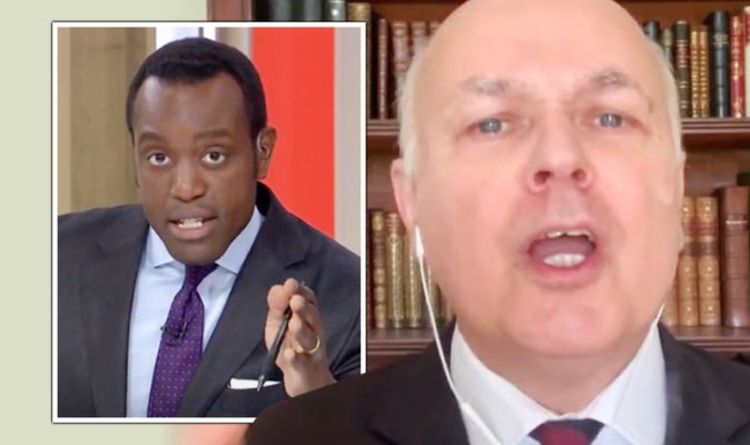 Iain Duncan Smith blasted Sky News’ anchor Gamal Fahnbulleh for repeatedly cutting him off during a heated interview this morning. The former Tory leader became embroiled in a war of words with the TV news host, after he was interrupted during a response. During the interview he urged caution against this morning’s “leaks and suggestions” that the Prime Minister botched the country’s crisis preparation.

Reports in the Sunday Times today revealed that Prime Minister Boris Johnson, who is currently recovering from COVID-19, had missed five meetings of the COBRA emergency committee in the run-up to the outbreak.

According to a wide-ranging report, which criticised the government’s response to the outbreak, the government ignored calls to order more personal protective equipment (PPE) for healthcare staff, as well as sending some stock to China.

Iain Duncan Smith said: “I would advise caution on this news story. We have to get this into context.

“The world did not realise the extent of the pandemic in China because it is quite clear now that China suppressed and hid information for whatever reason.”

JUST IN: Michael Gove lashes out at BBC’s Marr over claim UK sent PPE to China

He added: “WHO, which has serious questions to answer, did not tell the rest of the world that this was a pandemic that was more than likely to spread.”

At this point, Fahnbulleh tries to interject, prompting Iain Duncan Smith to say: “Wait wait, can I just finish this point?”

When the Sky News host forecefully says “I am asking the questions,” the Tory MP hits back: “No, you ask the questions. Let me finish my point!

“You’ve asked me a question, let me swiftly answer.”

“The point I was trying to make before you interrupted me is that this is a process the government is trying desperately to get on top of. There are questions that will be asked but later on, not now.

“We have no idea who is leaking this information whether they are disgruntled or not, we don’t know. Ask the questions once we are on top of this process, and we have the country back up and running.”

The Tory MP also explained that it was “normal” for a Prime Minister to miss COBRA meetings, adding a leader would normally delegate charing these meetings to a minister.

He later tweeted: “The Prime Minister does not always attend COBRA meetings. The point of COBRA is the relevant Secretary of States attend & report back to the PM, who will then make executive decisions as required/necessary.”