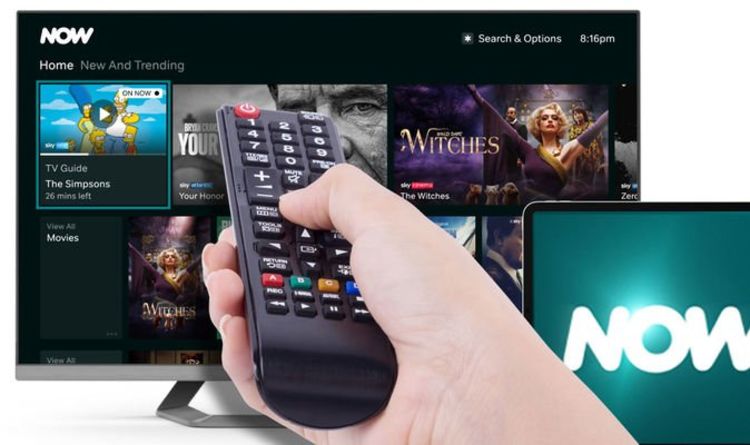 NOW, formerly called NOW TV, has announced a major shake-up that will give some customers a cheaper monthly bill and more content to watch without paying anything extra. Revealing the news exclusively to Express.co.uk, NOW has confirmed that it’s dropping the price of its Cinema Membership to £9.99 (was £11.99) and will be bundling the Kids selection of channels for free to all customers who pay for the Entertainment Membership.

That means those who subscribe to the Entertainment bundle can now get a bunch of extra shows including Cook With Buddy, SpongeBob Square Pants, Pip & Posy, The Adventures of Paddington, and The Thundermans.

Unfortunately for sports fans, NOW is keeping prices the same for Sky Sports customers with a 24-hour Sports Membership now staying at £9.99 and month-long access costing £33.99.

There’s more good news for existing customers as NOW is also adding some extra features to its optional “Boost” add-on. This extra service now lets you to stream shows and movies on more screens simultaneously (handy in busy homes with multiple TVs or smart devices) and beam footage to your TV in full HD resolution.

Starting next month, Boost will also get the addition of ad-free viewing when watching via on-demand, 5.1 Surround Sound and all sports channels will get a 50fps makeover for a silky smooth picture quality.

It’s worth noting that new NOW customers will have to pay £5 for Boost rather than the current £3 a month, however, anyone who already subscribes won’t be hit by this increase.

NOW is also giving all existing Entertainment members with a Kids Membership access to Boost without seeing anything added to their bill. Of course, if you want to drop your monthly outgoings, you can pay for a standard Entertainment subscription and get Kids shows for free. However, if you’re happy paying the same, NOW will unlock the Boost features on your account (so you’re essentially paying for Boost now that Kids is free).

There’s plenty to like about these changes, but there are a couple of things to be aware of. Firstly, the standalone Kids pass is now being removed, so new customers will need to sign up to Entertainment to watch shows aimed at a younger audience.

NOW is also dropping the number of devices users can stream to simultaneously from two to one. If you want to watch a boxset on an iPad upstairs while younger members of the family watch one of their shows in the living room, that’s no longer possible without paying for Boost.

If you use NOW, you’ll get a message from the firm in the coming weeks explaining what the changes mean with the update coming into effect from July.

Speaking about the shake-up, a NOW spokesperson revealed to Express.co.uk: “At NOW, we constantly evaluate and invest in our content and product offering to meet the evolving needs of our members. Having recently relaunched our brand, we are continuing this transformation by taking the opportunity to simplify our membership options providing more value for our members.

“The new NOW offering will make it easier for members to access the world’s best entertainment, with the flexibility to choose the package that suits them, whilst avoiding price increases to the core content membership proposition.”