Cystic Fibrosis victory: Ayden, 13, weeps with joy as he... 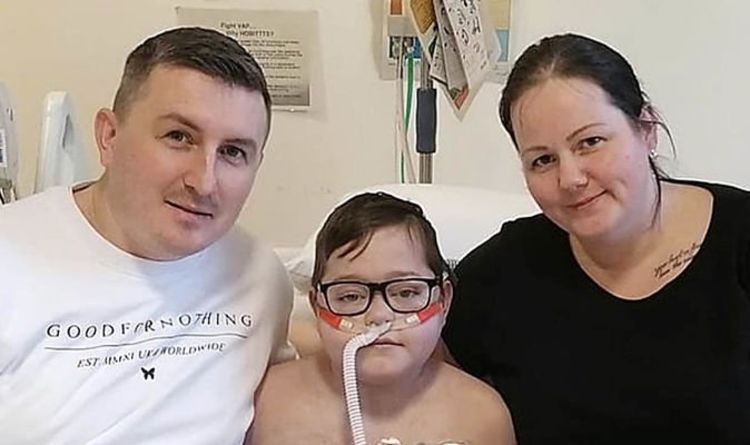 His elated mother, Tracey, 33, said last night: “Thank you to the Express and your incredible readers for all you have done. “He’s still very sick and has declined a lot over the past week, so his journey ahead is going to be difficult and dangerous. “But this is really positive and while he continues to fight, we will fight with him. “He is a warrior. He is our son. His life matters. This fight is not over,” she added.

Vertex’s U-turn followed our two heart-rending appeals last week, including a bedside plea by Ayden to save his life.

Only seven months ago, a lively Ayden had guests in hysterics when he gave a speech at his parents’ wedding. But a series of winter infections left the football-mad youngster in intensive care at the Royal Hospital for Children, Glasgow, fighting to breathe.

It was thought he would die in days unless he received Trikafta and in the last 48 hours, Ayden and his doctors have fought to keep him off a life support machine.

If Ayden had been put on life support, it was unlikely that Vertex would issue Trikafta.

On Friday, Ayden’s condition was so grave, doctors feared he would not survive that night.

Tracey said: “At 11pm, we were asked to consider withdrawing Ayden’s support as it didn’t look like he was going to make it through the night.

“I think for a long time we have tried to be prepared for this, but you can never be prepared.

“After a difficult few hours, we had a phone call from Ayden’s consultant to say Vertex had phoned and said ‘Yes’.” Trikafta is not yet licensed in Europe and the only way a UK CF sufferer can receive it is through Vertex’s “compassionate use” scheme for seriously ill patients.

Ayden, from Johnstone, Renfrewshire, was born with a blocked bowel, which is a common indication of CF.

The youngster has had many serious chest infections which affected his lungs.

At just 18 months, doctors had to remove a third of his bowel.

He also suffers from CF-related diabetes and hepatopulmonary syndrome (HPS), a rare lung complication of cirrhosis of the liver.

Ayden needs Trikafta in order to stabilise enough to have a bowel and liver transplant, which would secure his long-term future. Earlier this week, Ayden implored Vertex from his intensive care bed: “Please give me Trikafta and let me have the chance to live.

“Right now, it feels like I am suffocating in my own body and I’m trying really hard.”

Ayden added: “I would give anything to be able to kick a football around again and see my wee brother and sister start school.”

Vertex contacted us last night and said: “We have been working closely with doctors to understand the patient’s condition and complex medical circumstances.

“Based upon the final treatment recommendation of the patient’s team of doctors, we have approved the request for access to the triple therapy.”

The youngster is so swollen with fluids, he is sleeping all day and his ears are also blocked, making it impossible for him to hear.

Now, following the news that Ayden will start taking Trikafta, Tracey, her husband Paul, 33, and their other children Cody, 15, Dylan, 10, Lucie, four, and Rueben, two, are hoping for a miracle.

At Christmas, we helped dying Nicole Adams, 28, of Belfast, obtain Trikafta while in intensive care.

Weeks later, she was out of hospital, smiling and back home.

Nicole is now in contact with Tracey, giving support and advice, and she also wrote a moving plea to Vertex in Friday’s Daily Express.

The Cystic Fibrosis Trust says the condition affects more than 10,500 people in the UK. Sufferers are born with CF and one in 25 people carry the faulty gene that causes it.