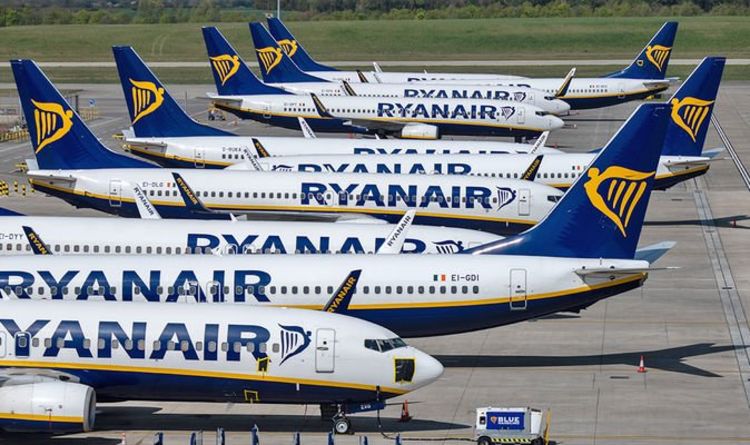 Ryanair has revealed it may have to implement dramatic job cuts following the coronavirus pandemic. It the latest update from the Irish low-cost airline, Ryanair said it could take two years for the carrier to recover. Under new plans, up to 3,000 pilots and cabin crew are set to lose their jobs.

Looking ahead at the next year until March 20201 the airline expected to carry 35 percent fewer passengers than normal.

Ryanair said in its statement: “Due to Continent-wide EU Government flight restrictions, Ryanair expects to operate less than 1 percent of its scheduled flying program in Apr, May & June 2020. Q1 traffic of less than 150,000 passengers will be 99.5 percent behind the Q1 budget of 42.4m passengers.

“While some return to flight services is expected in the second (July-September) quarter, Ryanair expects to carry no more than 50 percent of its original traffic target of 44.6m in Q2.

“For the full year ended March 2021, Ryanair now expects to carry less than 100m passengers, more than 35 percent below its original 154m target.”

Ryanair also said it will cutting the number of planned aircraft deliveries over the next 24 months as it anticipates a “slower and more distorted EU air travel market in a post Covid-19 world.”

The airline also revealed the major job changes it would be implementing.

“As a direct result of the unprecedented Covid-19 crisis, the grounding of all flights from mid-March until at least July, and the distorted State Aid landscape in Europe, Ryanair now expects the recovery of passenger demand and pricing (to 2019 levels) will take at least two years, until summer 2022 at the earliest,” said the carrier.

“The Ryanair Airlines will shortly notify their trade unions about its restructuring and job loss program, which will commence from July 2020.

“These plans will be subject to consultation but will affect all Ryanair Airlines, and may result in the loss of up to 3,000 mainly pilot and cabin crew jobs, unpaid leave, and pay cuts of up to 20 percent, and the closure of a number of aircraft bases across Europe until traffic recovers.

“Job cuts and pay cuts will also be extended to Head Office and Back Office teams.

“Group CEO Michael O’Leary, whose pay was cut by 50 percent for April and May, has now agreed to extend this 50 percent pay cut for the remainder of the financial year to March 2021.”

O’Leary has also slammed the suggestion that airlines could remove the middle seat option to encourage social distending – as a number of US carriers have done.

By Though airlines have increased the cleaning onboard, and are asking passengers to wear face coverings during their journeys, there are some other key elements...
Read more
Travel

By “The hotel management immediately informed the staff, current customers and guests who are due to visit to manage their bookings accordingly.” CEO of Thanos Hotels...
Read more
Travel

By The commitment is likely a blow to many who have skiing getaways booked as nearly all the most popular skiing destinations are currently on...
Read more
Travel

By It comes after a travel ban lasting 89 days. Holidaymakers can now enjoy a break in the Canary Islands without the need to quarantine on...
Read more
Travel

By Lauren Sloss International travel had been a major part of Paul Brinkman’s life for years. Mr. Brinkman, 47, his wife and their four children spent...
Read more
Travel

By When the announcement first came that Brexit trade talks would resume, the pound saw its biggest one-day growth against the euro since March. However,...
Read more