Trump tries on a fourth chief of staff in the... 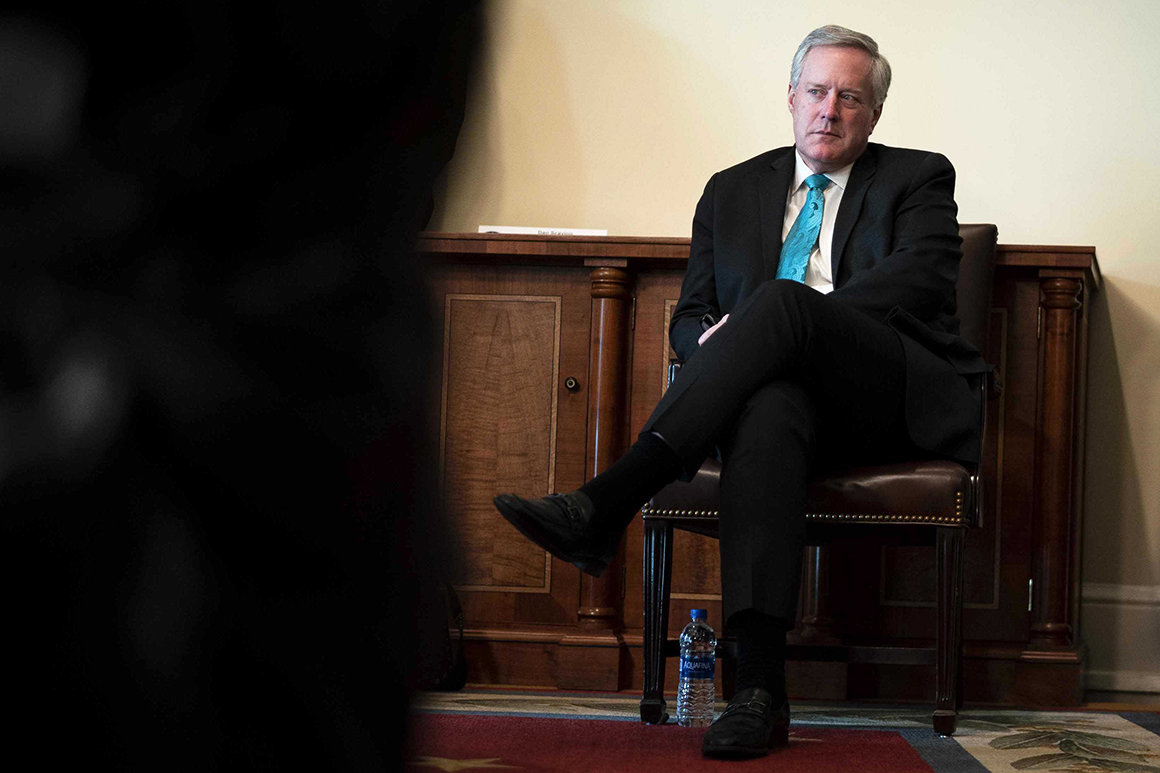 President Donald Trump’s fourth chief of staff relinquished a safe seat in Congress and agreed to join the White House in early March, when the unemployment rate sat at a historic low and Trump’s team appeared confident about his reelection.

A month later, Mark Meadows is now presiding over a vastly different West Wing, which is under siege like never before due to the coronavirus pandemic. The administration still lacks the ability to widely test Americans for the virus. Governors and health care workers are blanketing the airwaves, begging for additional medical supplies such as ventilators, masks and gowns. And the nation’s coronavirus death toll is surging as top health officials warn Americans of tough weeks to come akin to 9/11 and Pearl Harbor.

It’s hardly an optimal time to take over the White House’s top staff job, especially for a former congressman hired for his political skills heading into 2020. The success of the campaign now depends on the administration’s coronavirus response, which so far has been widely criticized as behind-the-curve, ad hoc and marred by confusing chains of command.

Meadows allies remain confident he can handle the new challenges the pandemic presents.

“You think about every big issue on Capitol Hill in the last five or six years, and he has been in the middle of it,” said Rep. Jim Jordan (R-Ohio), co-founder of the House Freedom Caucus and one of Meadows’ closest friends on Capitol Hill. “This is huge and this is bigger than other issues, but he has always been in the thick of things. And I think he is well-equipped.”

Meadows faces the unenviable challenge of guiding the White House through this unprecedented public health crisis and political test of Trump’s leadership. Like Trump’s previous three chiefs of staff, Meadows must advise the president, maintain his good standing with the president’s children and keep up the hands-off approach the president has come to expect from his top White House aide. And there’s no guarantee Meadows will have a different experience than Mick Mulvaney, Gen. John Kelly or Reince Priebus, especially in a White House that has seen unprecedented turnover over the course of three years.

“One of the principal reasons we are in this mess is because Trump has never had a chief of staff who will tell him hard truths, and under Mulvaney, Trump essentially defined the White House chief-of-staff job out of existence,” said Chris Whipple, author of “The Gatekeepers: How the White House Chiefs of Staff Define Every Presidency.” “Now, we’re in a crisis that requires a strong federal response and we’re getting none of it. So, good luck, Meadows.”

Meadows intends to approach the chief of staff job in a hands-on manner and wants to be heavily involved in the White House’s outreach and relationships with Capitol Hill, according to interviews with a dozen current and former senior administration officials and Republicans close to the White House.

Even before he formally left Congress last Monday for his new White House role, Meadows was heavily involved in the final days of negotiations of the $ 2 trillion economic rescue package, and would like to work with other officials to negotiate a potential fourth package. Although he intends to let Trump act as the administration’s front man and consult a wide range of advisers, as Mulvaney did, Meadows also intends to closely advise the president on policy and political decisions, whereas Mulvaney primarily viewed his job as running the White House staff.

Meadows enters the White House with a far closer relationship with both Trump and the president’s son-in-law and senior adviser, Jared Kushner, than any of the first three chiefs of staff, said a former senior administration official.

No one expects Meadows to try to change the often mercurial president, aides and allies say. But Meadows also has no problem standing up to the president or nudging him in a specific direction — as he did during the White House’s 2017 failed effort to repeal and replace Obamacare, or during the historic government shutdown in the winter of 2018-19.

In the coming weeks, Meadows is expected to make personnel changes to the leadership of both the Domestic Policy Council, which is led by Mulvaney ally Joe Grogan, and the Office of Legislative Affairs, led by Eric Ueland, formerly a top Senate leadership aide who earned wide praise for his work alongside Treasury Secretary Steven Mnuchin in negotiating the recent economic package.

The timing of these changes remains unclear to close Trump advisers, given the all-consuming focus within the White House of dealing with the coronavirus pandemic.

Meadows sought to bring a calming influence into the West Wing this past week, according to senior administration officials. He did not just meet with top officials like Kushner or Ivanka Trump who he already knows well but with a wide range of staff to gain a better understanding of the breadth of their duties. One former senior administration official joked that it really wasn’t accurate to call this past week Meadows’ first on the job week since he’d already been such a constant presence in the White House.

Unlike Mulvaney, who staffed the office with a cadre of aides that included an attorney and his own national security adviser, Meadows has arrived with a staff of four. One of those is his longtime aide and now senior adviser to the chief of staff, Ben Williamson, and a scheduler, who all have credentials and résumés that have pleased Trump’s conservative base. Meadows and Williamson did not respond to requests for comment.

The biggest challenge for Meadows is succeeding where Trump’s three prior chiefs of staff failed, even with their wildly divergent approaches. In each instance, Trump tired of their leadership styles and sidelined them for months before eventually firing them.

Priebus tried to staff the White House with former aides from the Republican National Committee, his former shop, and he tried to attend every meeting, sticking by the president’s side nonstop in an effort to maintain his power.

Kelly deployed a more military-style approach, where he initially restricted access to top meetings and the list of who could reach Trump directly by phone. It, too, failed.

Mulvaney tried the opposite approach from Kelly, vowing to allow Trump to do as he pleased and speak to whomever he wanted while Mulvaney controlled the staff. That did not work, either. Kushner essentially became the shadow chief of staff in that power vacuum, and Mulvaney was ultimately excluded from a number of major personnel decisions and key moves including during impeachment. 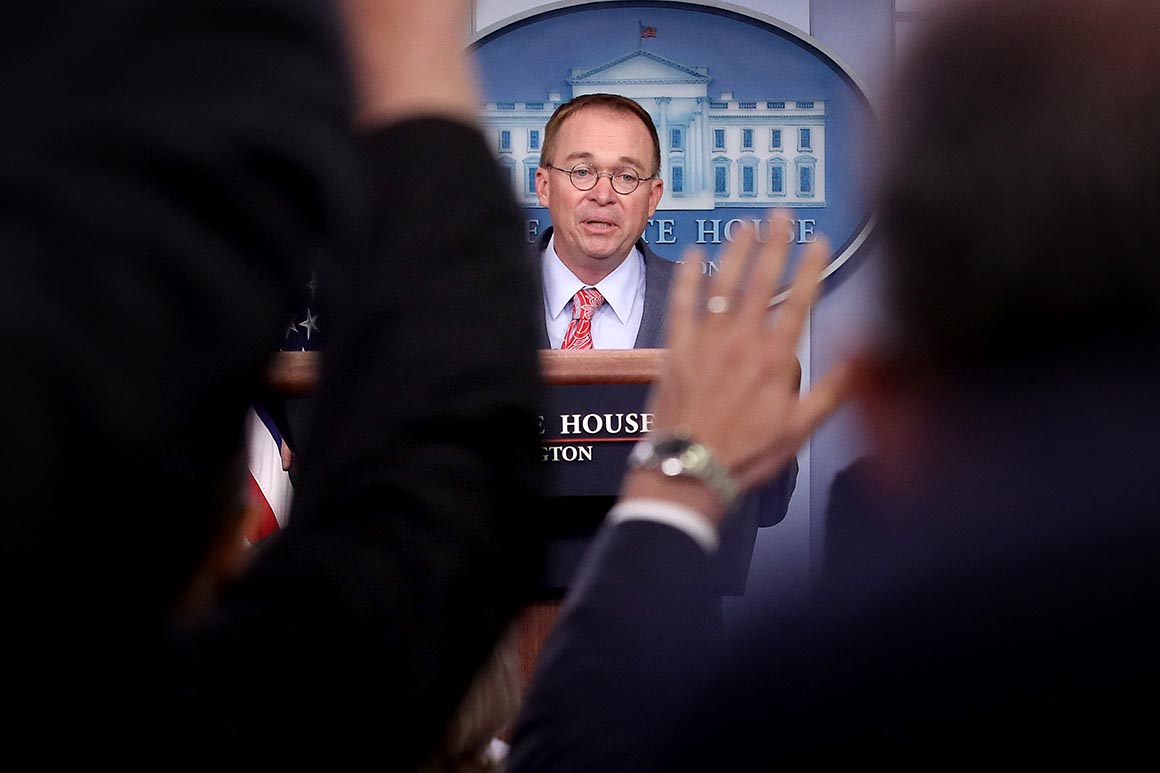 There’s no guarantee Meadows will have a different experience.

But White House aides have given Meadows high marks for taking the time to meet with a wide range of White House staffers, a move that contrasts with his reputation on Capitol Hill as a die-hard conservative Republican who challenged the leadership of former House Speaker John Boehner, held up legislation with policy demands and led insurrections within the caucus. Meadows helped orchestrate Trump’s defense strategy during impeachment, earning him plaudits from the GOP conference — including some of his usual detractors — and helped him repair his relationship with Republican leadership.

“Even people who have had disagreements [with Meadows] over time, they’ve always respected Mark and appreciated Mark,” Jordan said. “I think it’s a positive he can disagree with people in Congress but can still work with them on other issues.”

Meadows was close with the Rep. Elijah Cummings (D-Md.), who died in October; he has doled out advice to members of the left-leaning Congressional Progressive Caucus; and he and his wife have even gone to plays with Democratic lawmakers — all signs that allies say point to Meadows’ ability to work with both Republicans and Democrats.

“Meadows is kind of like the president. He is very gregarious,” a second former senior administration official said. “Almost any leader in D.C. can get through to the president, and Meadows is like that, too. Mick had a much smaller circle of friends and advisers and kept to it.”

During his first week in the White House, Meadows has displayed a strong grasp of health care policy during coronavirus meetings, said two senior officials, but his real skill set is politics and navigating ever-changing alliances and demands, said several Republicans close to the White House.

“He helped to get the third stimulus package over the finish line, whereas in the old days, he would have been the guy being Thomas Massie,” one Republican with close ties to the White House said, referring to the House lawmaker who tried to hold up the vote on the economic rescue package by pressing lawmakers to return to vote in person. “Now he is the guy helping to negotiate with Chuck Schumer.”

Another Republican strategist said some lawmakers were happy to see Meadows on Capitol Hill during those negotiations because they worried that Mnuchin would cede too much ground to the Democrats. “That was interesting to hear. I can’t believe lawmakers would say so soon, ‘I am relieved to see Mark Meadows,’” the strategist joked.

Meadows’ most immediate goal is to ensure the White House can get the coronavirus under control before focusing on rebuilding the economy and Trump’s reelection — tough tasks as unemployment soars, businesses shutter and the number of coronavirus cases surges, with better treatments still months away and a vaccine even further out.

“Everyone in their head thinks heading into that chief of staff job that they’ll be James Baker,” said one of the Republicans close to the White House, referring to the legendary Republican who served as the chief of staff under Presidents Ronald Reagan and George H.W. Bush, in addition to serving as Secretary of Treasury and Secretary of State. “If that worked out for Mark Meadows, he would be thrilled, but that is pretty ambitious, especially in the Trump administration.”