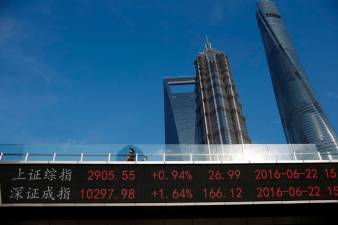 SHANGHAI: Chinese shares and the yuan weakened on Friday amid a global market meltdown triggered by intensifying fears over the global spread of the coronavirus.

The benchmark Shanghai Composite Index opened down 4.1% at its lowest level since Feb. 5 before trimming some losses. It was last down 3.2%, off nearly 10% from mid-January highs.

Chinese blue-chip shares opened 4.6% lower, at their weakest point since Feb. 4, and were last down 3.5%. Shares in Hong Kong suffered steeper falls, with the Hang Seng Index down 6.1%, on track for its worst day since 2008

The yuan weakened after the People’s Bank of China lowered its daily fixing for the yuan’s trading band to the weaker side of the key 7 per dollar level for the first time in two weeks, at 7.0033 per dollar.

That was 392 pips or 0.56% weaker than the previous fix of 6.9641, the biggest one-day weakening in percentage terms since Feb. 4, and much weaker than market expectations.

Traders and analysts said the weak fixing could be a sign that the central bank might allow some yuan weakness for now.

Chinese 10-year government bond futures were stable amid the market ructions, with the most-traded contract, for June delivery easing 0.05% to 101.425. – Reuters