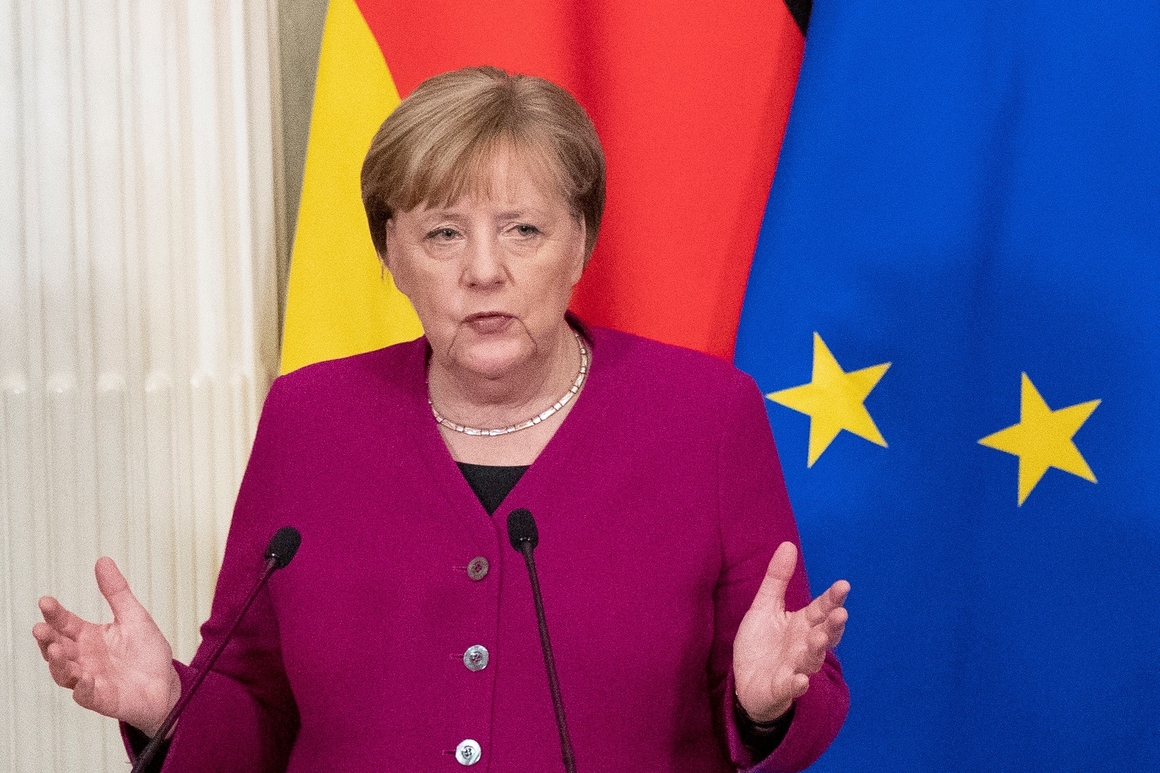 BERLIN — For Europe’s most austere leader, it was a rare flash of emotion.

Pressed during a news conference about what more she would do to help Italy and Spain cope with the fallout from the coronavirus ­­— a question she had been fielding from Rome and Madrid for weeks — Angela Merkel insisted Germany is already helping and would continue to do so.

“Europe’s well-being isn’t just a question of solidarity, it’s a matter of self-interest,” Merkel said. “That’s why it almost hurts to have to repeat myself. For me it goes without saying.”

The German chancellor’s indignance over suggestions her commitment to the “European project” is anything less than absolute reflects the growing disconnect the coronavirus has created in Europe. As leaders in Germany and other northern countries insist they will do everything they can to safeguard the EU, their counterparts in the south demand much more.

With the pandemic ravaging economies across the Continent, many in Europe want to believe Merkel will act. But should they? So far, Berlin has offered distressed countries little more than encouragement. Many are hoping Germany, which has so far weathered the crisis better than most, will agree to open its purse during a videoconference summit of EU leaders on Thursday.

Competing blueprints for how to structure a special “corona recovery fund” have been shuffling between Brussels and national capitals for days. Some want additional resources earmarked to the EU budget; others envision a freestanding fund under the administration of the Commission that could be financed through the sale of bonds.

The “corona bond” debate is a proxy for a more fundamental question: If Europe’s weakest economies emerge from the pandemic even less competitive than they were going in — and burdened by even more debt — what’s the case for them to remain members of the euro? Conversely, can the euro survive without them?

If Germany is the key to resolving the problem, that’s largely because it is the problem. The country’s outsized economic clout has made Berlin Europe’s political fulcrum, a responsibility its leaders are both uncomfortable with and have been unwilling to take on.

Doing so would require them to confront the truth. In Germany’s popular imagination, the euro has been a success because it leveled the playing field in Europe. Countries that have underperformed like Italy and Spain have only themselves to blame. They failed, as Merkel never tired of pointing out during the Greek debt crisis, “to do their homework.” The implication was that Germany had done its homework.

In fact, as the fallout from the coronavirus is making clearer by the day, the odds were stacked in Germany’s favor from the outset.

The euro was sold to Southern Europe, which had been less successful than the north for decades, as a path to lasting prosperity. By eliminating exchange rate risk and lowering interest rates, Southern Europe would become more competitive.

But after the initial economic boost that followed the euro’s introduction, the picture for the region darkened. Though countries that had historically high inflation benefited from lower interest rates, the cheaper financing had the unintended consequence of removing the pressure on governments to enact economic reforms.

Partly as a result, growth in Italy and other countries stagnated. Though it’s easy to portray that as “their fault,” as some German economists have done, the expectations were likely unrealistic from the start.

In Germany, and the small surrounding countries that integrated into its industrial economy, the reverse was true. Caricatured as the “sick man of Europe” in the early 2000s, the German economy took off following the introduction of a package of sweeping labor market reforms.

Once plagued by the strength of the Deutsche mark, Germany benefited from the euro’s lower exchange rate, which made its goods more competitive abroad. That was particularly true within the eurozone itself, which accounts for about 40 percent of Germany’s exports. For decades, exporters from Southern Europe could undercut their German competitors on price. No more.

That wouldn’t be such a problem if Germans reciprocated by buying their neighbors’ exports with equal vigor. But Germans prefer to save, both in the private and public spheres. As a result, the country has large trade surpluses with much of the eurozone.

Instead of acting as the great equalizer, as the fathers of the euro promised, the euro has exacerbated Europe’s economic divisions and, arguably left some countries worse off. In Italy, for example, per capita GDP in 1999, the year the euro was introduced, was about €1,000 above the eurozone average; by the end of last year, it had fallen to about €4,000 below the average. The country’s economy has effectively been stalled for two decades.

All along — counter to the popular perception in Germany and other northern countries — Italy has kept a lid on public expenditures, running a small budgetary surplus, before interest payments, year after year. But without economic growth, the country’s debt, a legacy of government overspending in the 1980s and early 1990s, has remained high.

Italy’s history with the euro explains its population’s growing frustration with the currency and, more generally, with the EU. Having relinquished a large degree of sovereignty to join the euro club, Italy, in the view of many Italians, has little to show for it.

The EU’s slow response to Italy’s struggle with the coronavirus has further exacerbated those tensions. Less than half of Italians said they consider themselves to be “pro-European” in a recent survey.

At 130 percent of GDP, or €2.5 trillion, Italy has the greatest debt burden of any country in the euro area except for Greece. By comparison, Germany’s debt totals less than 60 percent of its GDP. Rome can continue to finance itself for now because the European Central Bank is buying its debt in the markets, keeping a lid on the interest it pays. But that won’t last forever.

That’s where Germany comes in.

Rome wants the EU to use “all of its firepower” to combat the crisis by issuing common debt, so-called corona bonds. Berlin, playing to part, has put on the brakes. While Merkel signaled this week that she is willing to go further than the €500 billion aid package currently on the table, hopes that she will embrace something like the €1.5 trillion plan tabled by Spain are likely too optimistic.

It’s a familiar pattern. Throughout the euro crisis, Merkel and other German leaders insisted they were showing solidarity by lending a helping hand. But the demands Berlin placed on the aid often left the recipients feeling more abused than helped. Memories of that period and a perception Germany ran roughshod over Greece and other countries has contributed to the poisoned atmosphere of recent weeks.

Perhaps the most reliable guide in trying to gauge Germany’s likely course is its past behavior. Throughout the euro crisis, Berlin insisted that countries receive no more than was absolutely necessary and that they enact economic reforms as a precondition for the aid. While Merkel appears willing to relax that conditionality this time around, given that countries don’t bear direct responsibility for the crisis, she has said nothing to suggest Berlin will open its coffers.

One reason is that Germany is already spending considerable sums to get its own economy back in gear. By some estimates, the measures Berlin has implemented to confront the crisis are equal to 7 percent of German GDP. As the economic crisis worsens, as looks inevitable, the pressure on Merkel to do more will rise, making spending on the rest of Europe even more difficult.

For all of the discussion at the European level about corona bonds and the need for action, the debate in Germany has been fairly muted. While many economists and center-left commentators have called for more “solidarity” with Italy and Spain, Merkel has largely stayed out of the fray.

Recent polls suggest Germans are more willing to accept common debt issuance than was the case during the Greek crisis. Even so, given the strong resistance in some quarters to the idea, a concerted push by Merkel and her ministers would be necessary to win broad public support.

“If German politicians make a strong case, that would make a huge difference,” said Lucas Guttenberg, a former ECB economist who is now the deputy director of the Jacques Delors Center, a Berlin-based think tank. “The real question is do we want to share the costs, and that’s a political question.”

Guttenberg recently put forth a proposal with other economists for the EU to establish a fund that would raise money through the sale of bonds backed by all members. The money could only be used to combat the fallout of the pandemic. One advantage of such a structure, which is similar to what both France and Spain have proposed, is that the debt would be on the books of EU and not national governments.

Yet that kind of arrangement opens the door to the “moral hazard” German conservatives in Merkel’s own party have used to bat down similar proposals in the past. In their view, handing countries money with few strings attached leads to bad behavior.

The other question German skeptics of such plans raise is what difference it would really make. At best, bailing out Italy and Spain would bring them back to the point where they were pre-crisis. But that wouldn’t solve the underlying structural problems that have bedeviled the euro for years. The single currency would remain as exposed as ever.

The most convincing argument for bold German action is that Italy isn’t Greece. That is, it’s too big to fail. German industry is heavily engaged in the country, as are German banks. So whether it wants to or not, Germany may have to save Italy to save its own economy.

Italy’s massive debt is also the strongest argument for it to remain in the euro. Were it to leave and reintroduce the lira, it would find itself servicing its euro debt with a much weaker currency — greatly increasing the size of the debt mountain it would have to climb. Populists like Matteo Salvini, who is encouraging his countrymen to rethink their stance on Europe, gloss over the ramifications of a euro exit for the country.

Nonetheless, given Italy’s experience in the German-dominated euro so far, Italians might be forgiven for thinking that leaving is their only option.

This article is part of POLITICO’s premium policy service: Pro Financial Services. From the eurozone, banking union, CMU, and more, our specialized journalists keep you on top of the topics driving the Financial Services policy agenda. Email pro@politico.eu for a complimentary trial.