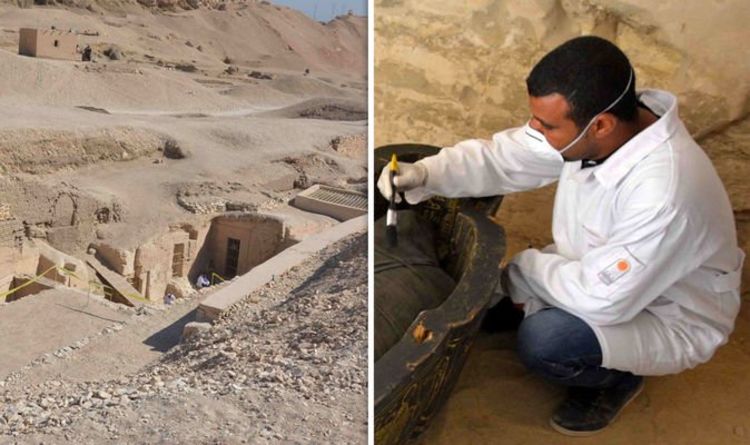 Archaeologist Zahi Hawass who led the excavation told CNN: “Each workshop had a different purpose.

“Some were used to make pottery, others to produce gold artefacts and others still to manufacture furniture.”

The site, which sits around 75metres (246feet) down the valley, had inlay beads, silver rings and golden foil found within it.

The team deemed these items significant as they were commonly used to decorate the wooden coffins of Egypt’s ancient royalty.

Some of the artefacts found depicted the wings of Horus, a deity associated with death and resurrection.

Of the finds, Mr Hawass said: “This is unprecedented.

“Up until now, everything we knew about the Luxor region came from the tombs themselves, but this new discovery will allow us to shed a light on the tools and techniques used to produce the royal coffins and the furniture placed in the tombs.”

Mr Hawass explained the significance of the discoveries as it reveals for the first time workshops making funerary ornaments on an “industrial scale”.

His team has been researching the area around Luxor for almost two years.

During this time the archaeologists branched out to the neighbouring Valley of the Kings in the hope of piecing together similarities between the two locations.

The scale of the expedition makes its the largest since legendary British archeologist Howard Carter’s in the 1920s, according to the Ministry.

Researchers had found one tomb in the Valley of the Kings, labelled KV 65, which was found to contain tools used for its construction.

Since finding this tomb and the industrial area, archaeologists have uncovered a separate 20 ancient coffins near Luxor.

Two layers of coffins were found in two rows on top of each other.

The ministry described the find as “one of the largest and most important” in recent years.

The seemingly undamaged engravings and colouration of the coffins have excited researchers most.

A press conference will be held on Saturday where researchers will disclose more information on the discoveries.