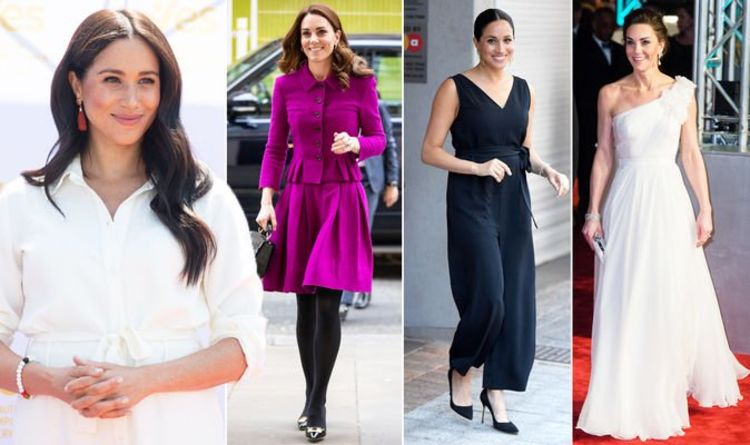 Kate Middleton and Meghan Markle are both part of the Royal Family and are often compared on their style. In 2019, the royals wore fashionable designer garments that tallied up to an eye-watering total cost. Attending many important royal events, they both spent a whopping sum on their wardrobes this year.

In February, the royal wowed in a two toned pink Gucci dress as she attended a gala in London.

However, many of the pricier items Kate wore were recycled, which means she has managed to make some savings this year.

The Duchess is also no stranger to high street garments and donned a floral ruffled maxi dress from & Other Stories, which cost £79, to the Chelsea Flower Show in May.

Kate wore an affordable pair of New Look suede pumps while on an official tour of Pakistan, which cost just £23.99.

How much did Meghan Markle’s wardrobe cost?

The Duchess of Sussex spent roughly £5,666 a month on her wardrobe this year, according to reports.

However, Meghan kept a low profile in 2019 as she enjoyed maternity leave and ended the year on a six-week break from royal duties, meaning many of her outfits went unaccounted for.

Meghan gave birth to her son, Archie Harrison Mountbatten-Windsor, seven months, in May and it was revealed she spent a jaw-dropping £90,000 on clothes during her pregnancy.

This included a number of designer pieces and she wore a Calvin Klein wool turtleneck dress, £1,473, with a £922 coat to attend a gala at the National History Museum.

However, she appeared to take a thrifty approach to her wardrobe after giving birth.

When the Duchess was spotted at Wimbledon after maternity leave, she wore a white blazer which cost a reasonable £168.

She returned for her first official tour as a mother in October and reportedly spent just £4,000 on her wardrobe for the whole trip.

While on the tour, she stepped out wearing an affordable £69 tea dress from a local ethical label called Mayamiko.