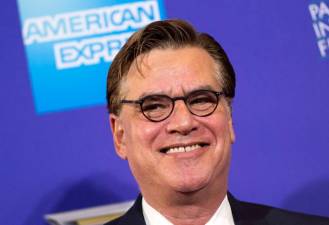 WHEN Steven Spielberg called up Aaron Sorkin and asked him to write a movie about the 1968 Chicago anti-war riots – and the extraordinary trial that followed – the West Wing creator had no idea it would launch in such divisive times.

That meeting was in 2006, and the The Trial of the Chicago 7 finally debuts on Netflix next month with a mouth-watering ensemble cast including Mark Rylance, Eddie Redmayne, Joseph Gordon-Levitt and Sacha Baron Cohen.

During that long stretch, “the world just kept more and more mirroring the events of the movie,“ said Sorkin, who took over directing duties after Spielberg dropped out.

“This was before Breonna Taylor, Rayshard Brooks, George Floyd. This was before that. The similarities… are chilling,“ Sorkin told the Toronto film festival on Sept 14, referring to African Americans killed by US police.

“The movie was relevant when we were making it –we didn’t need it to get more relevant. But it did.”

The film depicts how in 1968 – with opposition to the Vietnam War mounting, and Martin Luther King Jr. and Bobby Kennedy assassinated– stone-throwing demonstrators clashed with club-wielding policemen as the stench of tear gas filled the air.

In the ensuing trial, hippie defendants used humor, costumes and even song to condemn the political establishment, as a powerful judge ordered a Black Panther leader gagged and chained to his chair.

“What we’re seeing today, once again, is the demonization of dissent,“ Sorkin told an online talk.

“We had been looking back at 1968… and saying, ‘That was awful. But thank God we got through that. And we’re better, we don’t have to do that again’,“ he added.

“It’s like building a house, having it almost finished. And then a gust of wind comes and knocks it down.”

Hundreds were arrested in the 1968 Chicago riots that took place during the Democratic Party convention, overshadowing the doomed nomination of Hubert Humphrey and symbolizing a deep divide in the American people.

A clip from Sorkin’s movie shown at Toronto evoked demonstrators chanting: “The whole world is watching.”

This summer, the United States was gripped by massive nationwide protests over police killings of African Americans, with the “Black Lives Matter” message resonating around the world.

In the extraordinary real-life trial that followed the 1968 Chicago protests, all seven defendants were acquitted of conspiracy but five were convicted of crossing state lines to incite riots and later won on appeal.

They were also cited for contempt of court almost 200 times. The citations were thrown out.

The Trial of the Chicago 7 launches in select theaters September, and on Netflix from October 16.

Toronto, North America’s biggest film festival, is taking place mainly online this year due to the coronavirus pandemic. It runs until Sept 20. –