SpaceX has come a long way since it launched its first rocket 12 years ago to the day this week.

On September 28, 2008, Elon Musk made history by launching the first privately-developed liquid-fuel vehicle into orbit around the Earth – the Falcon 1.

Fast-forward 12 years and the enigmatic founder has hundreds of satellites in space under his Starlink constellation, is pushing to jet tourists to the moon and even further afield to Mars.

But with the increased number of satellites and rockets blasting into the starry beyond, more videos are available from above Earth.

It has led to countless claims from the conspiracy world that SpaceX live feeds have managed to capture UFOs soaring through the skies.

While they may well seem bonkers, hundreds of thousands of people have watched and commented on the so-called discoveries over the years.

Here, Daily Star Online takes you through some of the most bizarre findings.

Have you ever seen a UFO? Let us know in the comments section below

Live streams cutting just as strange objects appear are two things that are bound to spark a conspiracy frenzy.

And that’s exactly what happened back in March 2017 after the aerospace company launched a commercial satellite into space.

Footage from the onboard cameras shows four bright lights apparently moving at the same speed and positions appearing behind the rocket.

After just a few seconds of showing the orbs, the feed is switched to an animated tracker of the rocket.

YouTube conspiracy theorist Tyler Glockner shared the clip to his channel Secureteam10, where he claimed there was clearly a “formation” of reflecting objects making up a triangular shape.

“I found it very strange that the feed was cut so suddenly at the precise moment that this formation of unknown objects in the distance were seen passing by or were passed by the rocket,” he added.

Viewers responded by suggesting the sight was anything from “aliens” to simply “debris”. 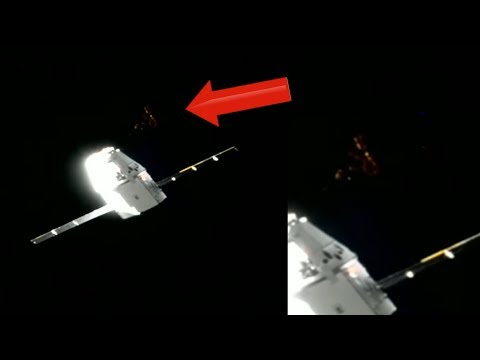 If that wasn’t enough to get conspiracy tongues wagging, the same thing seemed to happen the following year.

In even clearer footage, what seemed like an orange triangular craft was seen moving past SpaceX’s Dragon craft.

Conspiracy duo Blake and Brett Cousins noticed the sight on the company’s live feed and shared it to their channel, thirdphaseofmoon.

They claimed the live feed was “cut” before the camera angles changed just seconds after the object was spotted.

Blake even suggested the object could be the infamous TR-3B spy plane.

Many viewers were convinced that the object was some sort of spacecraft, but others suggested it may simply have been a reflection on the camera lens.

SpaceX’s Dragon capsule once again became the subject of a conspiracy frenzy at the beginning of this year.

Eagle-eyed viewers of NASA’s live feed claimed to see a collection of UFOs swarming the craft as it left the International Space Station.

In a baffling video, numerous orbs can be seen darting past in all directions with some even appearing to flash.

YouTuber Disclose Screen claimed there were “literally hundreds of UFO orbs” seen when the Dragon craft departed the ISS and his theory was backed up by thousands of viewers.

But some were more sceptical, with one commenting: “Specks of debris from either ISS or Dragon; usually thrust propellant.

In a recent launch of 60 Starlink satellites into orbit, space enthusiasts were convinced that they saw a mysterious cigar-shaped object appearing near the Falcon 9 rocket.

Around 15 minutes into the launch in footage seen above, a bright, long object seems to approach the rocket.

The so-called UFO becomes brighter and bigger as it gets closer before the live feed cuts.

Like the other sightings, the object sparked a wave of theories in the comments section.

One said: “It seems like that object whatever it is turned off its cloaking device allowing itself to be visible. Very interesting.”

As always, though, there were those who found more plausible explanations, such as the objects imply being the “first stage” of the rocket or a “lens flare”.

Bystaronline@reachplc.com (Michael Moran) A man arrested for “humping trees” and nibbling their branches may have been under the influence of some sort of drugs, says...
Read more
Weird

Bystaronline@reachplc.com (Sofie Jackson, Zasha Whiteway-Wilkinson) A delivery driver has spoken of his amazement at a mysterious object he says is a "UFO" he has been...
Read more
Weird

Bystaronline@reachplc.com (Sophie Bateman) In a scene straight out of a Stanley Kubrick sci-fi, an enormous monolith has been discovered in the Utah desert. Helicopter pilot Bret...
Read more
Weird

Bystaronline@reachplc.com (Michael Moran) On this day, 49 years ago, one of the most enduring mysteries in aviation history began. A hijacker who has passed into legend...
Read more
Weird

Bystaronline@reachplc.com (Sophie Bateman) The fearsome towering giant of Biblical legend Goliath may only have been slightly taller than a professional basketball player, archaeologists have claimed. Goliath...
Read more
Weird

Bystaronline@reachplc.com (Ed Chatterton, Matt Warner, Joseph Wilkes) This is the moment a dog walker came face-to-face with a big cat while walking through woodland at...
Read more

ByLike many of us in the UK, Piers Morgan, 55, has been watching the highly-anticipated 2020 series of I'm A Celebrity, but he wasn't...
Read more