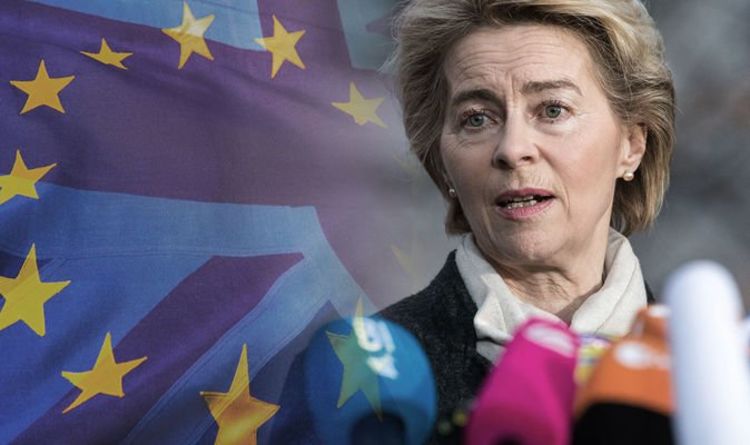 In a recent interview, the European Commission President encouraged the Prime Minister to reconsider his public commitment to not extend the transition period, under which Britain would remain under Brussels’ rulebook, beyond the end of the year. She told French newspaper Les Echos: “It seems to me that on both sides we must ask ourselves serious if all these negotiations are feasible in such a short time.” Brussels has now warned that bureaucratic red tape could further hinder the negotiations as the bloc attempts to confirm its mandate for the talks.

Ms von der Leyen’s chief spokesman today cast further doubt on a quick fire trade deal being struck after refusing to commit to a start date for the formal talks.

The EU Commission official warned that the bloc would not start talks until all remaining 27 member states have signed off on an official mandate.

“I don’t think we said the mandate would come out on February 1 precisely,” he said.

“We said our proposal for a mandate would be issued as soon as the United Kingdom had left the EU, which is foreseen for the last day of January.

“This draft mandate has to be approved by Council before negotiations can begin. I don’t have a specific date.”

The Commission and European Council have scheduled a series of secret meetings between January 8 and January 29 in order to hammer out the details of the mandate.

“In order to launch trade negotiations, the EU needs a formal mandate and this formal mandate needs to be approved by the Council,” the spokesman added.

Brexit Party MEP Rupert Lowe accused Brussels of adopting negative tactics that will only hinder the bloc’s development after the divorce.

He said: “For years there has been a constant stream of relentless negativity coming out of Brussels. Always presenting problems but never solutions.

“One thing is now clear – we are leaving the European Union. If the EU wants to make trade talks difficult then it will hurt them more than us.

“Time to put economics above politics and get a positive deal in good time that works for everyone.”

That meeting was considered disastrous for Brexit, with the then prime minister described as “anxious” and “tormented” in a leaked account of the gathering.

But Mr Johnson is hoping for far more successful talks by “love bombing” the EU, and seeking to avoid using the word Brexit after Britain leaves the bloc on January 31.

He also hopes that conducting trade negotiations in parallel with the US will pile the pressure onto Brussels to match his ambitious timetable.

The Prime Minister’s spokesman said: “Once we have left the EU on January 31, we will be free to hold trade discussions with countries across the world and not just focus on discussing the future partnership with the EU.”

“We must also recognise that the EU will deliberately drag its feet in the first few months of the year as they want the UK to be forced to extend the implementation phase at the end of 2020, giving the EU billions more in contributions to its budget,” he wrong in the Sunday Telegraph.

“Which is why we shouldn’t sit waiting for the EU to be ready; we should underline our sovereign position by embarking on parallel trade negotiations with USA.”