Writers Rumaan Alam and Bryan Washington on Capturing Reality in... 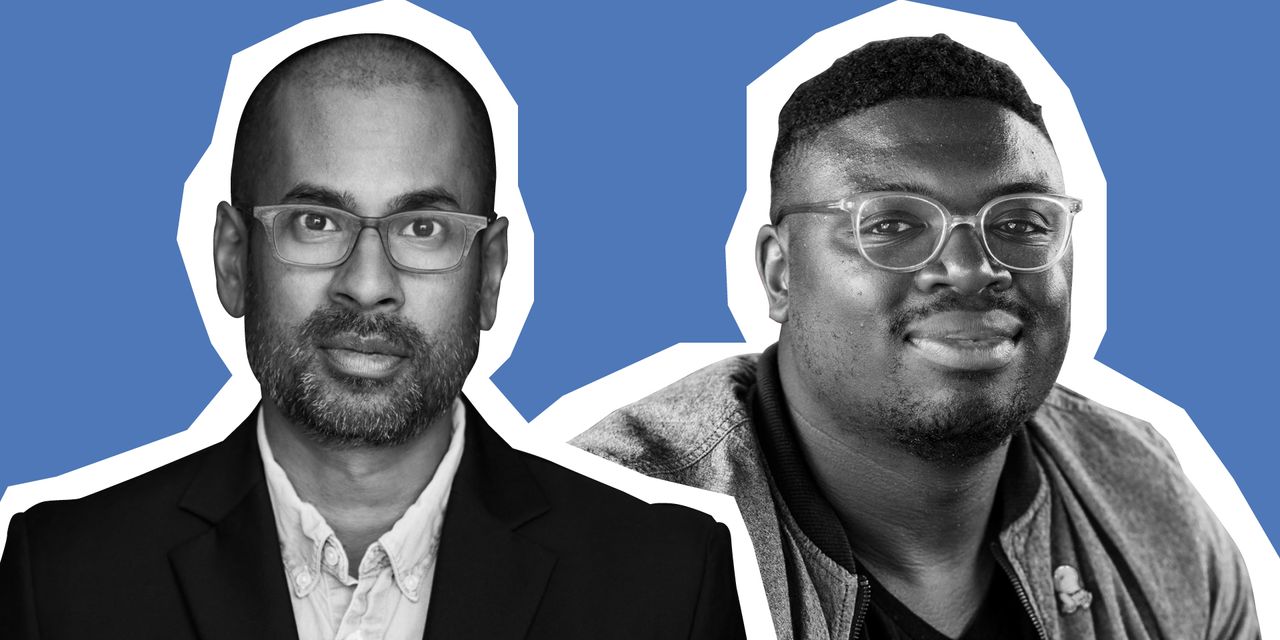 Writers Bryan Washington and Rumaan Alam have never met in person, though they’re intimately familiar with each other’s work. Alam, 43, who lives in Brooklyn, has been teaching Washington’s 2019 collection of short stories, Lot, to his class at Columbia University, and Washington, 27, who teaches at Rice University and lives in Houston, read Alam’s recent bestseller, Leave the World Behind, before it was published earlier this month. As their novels—both with screen adaptations on the way—are out this month, their worlds are finally coming together.

Washington’s novel, Memorial, to be published October 27, is set in Houston. It follows the romance of a Black day-care teacher, Benson, and a Japanese-American chef, Mike, who live together. When Mike has to go to Japan to see his ailing father just as his mother, Mitsuko, is coming to Texas to visit, a tricky situation arises: Benson is left to live with Mitsuko, the two never having met before. The TV division of the production studio A24 recently won the rights to it, with Scott Rudin and Eli Bush set to produce, and Washington writing the adaptation. Alam’s book, Leave the World Behind is also set to hit Netflix, in a filmed version starring Julia Roberts and Denzel Washington. It’s a similarly enigmatic novel that likewise touches on considerations of race. In the book, white Brooklynites Amanda and Clay take their son and daughter on vacation in Long Island. When a Black couple knocks at the door in the middle of the night, saying they own the house and need to stay there because there’s been a mysterious blackout in New York City, tensions emerge about who both couples are and what exactly is going on.

Washington and Alam recently spoke over Zoom to WSJ. and each other about their books and certain unsustainable expectations of the publishing industry, the “infantilizing” nature of so-called “anti-racist reading lists” and how being a realist writer today—amid so much chaos—means letting your stories and your characters get weird.

Bryan Washington: I was really fortunate to have a handful of people who advised me to start Memorial before [my] first [book] was even released. Not knowing how Lot would be received—there was the danger that maybe no one would care. I was just really keen on writing a love story between two folks that was not capitalizing on their trauma in the way that a number of queer love stories in literary fiction are solely capitalizing on the trajectory of that trauma and the expansion of that trauma and solely existing within the parameters of that trauma. I was wondering what a novel that frankly has no real resolution, doesn’t really have any lessons whatsoever, doesn’t really tell you how to feel about any particular thing or why you should feel that way, what would that look like? I still don’t know that I know what that looks like, but it was fun to try and seek that out. To be quite honest, until, I think, April of this year I was convinced that like six people would read it and maybe two people would be into it because, even now, to me, it’s a very structurally strange story.

Rumaan Alam: But you’re not talking about race, and that’s also an aspect of the revolutionary quality of this particular book. It talks about race but doesn’t perform conventions of race within our understanding of how those work in serious books.

Part of the thing you’re pulling off, even if you don’t wanna talk about it, because then once you talk about it you undermine the particular victory of having done it, is that it’s a queer love story but also an interracial story. I am so happy to hear you describe the book as weirdly shaped, because that to me is part of the particular pleasure of it: It’s so f—ing weird. The fundamental interplay of the two lovers at the heart of the book are not even occupying the same geographical space: one is there with the others’s mother. It’s such a bizarre idea and you just go with it, and I think it’s very gutsy because I can imagine a less good editor than Laura [Perciasepe], saying to you, “No, no, no, you’ve got to get them all under one roof. You have to have this moment of confrontation and then resolution, and then the story lingers on this closing note of denouement.” And that is not what this novel does at all. And that’s what makes it so effective.

Upending the Norms of Commercial Fiction

BW: Thank you! Insofar as I think about the work I’m doing on a macro level, which I’m generally not inclined to do, it is within the context of hoping that it will, just its existence, create an opportunity for someone else. The thing that really is striking to me is how so much work was only able to exist because so many other folks kicked the stone down the line in order to make a publishing environment that could deal with it.

RA: That is so true. The money people are rightly concerned with the market and where a book belongs intellectually and in what company. I think the notion that a queer love story is of interest only if you’re queer or that a coming-of-age story about someone who is Black is of interest only if you’re Black—and I think it can have a special resonance if you are Black—but the notion that it’s only for a reader who is Black is so shortsighted and so out of step with how people actually read. If you only read things that show yourself back to you, then you’re not engaged in [what] writing actually provides, which is intellectual challenge and the world opening up to you.

BW: I wholly reject the notion or the impulse that Memorial was meant to teach you something. I don’t know what it could possibly teach you! That sometimes life is nice, but mostly it’s quite shitty so appreciate the nice moments? What would Leave the World Behind teach someone, you know? That’s beside the point. I just don’t think that’s how people really read or how they approach narrative works. People just want to see a good story. I don’t know what the complications are of siloing texts written by folks from marginalized communities—saying, “This is the one for anti-racist reading lists—”

BW: —“This is the one for ‘next steps.’” It’s infantilizing, and it’s not doing what folks who are leaning into that think it’s doing. My biggest concerns with Memorial were comfort and pleasure. A moment can be so many different things and it can make you feel so many different ways. [It’s] really important to me not to solely segment any of the characters’ experiences into one emotional compartment or another [but to] allow them to feel a number of things over the course of the narrative, even if they don’t necessarily know how they feel about how they feel about those things. For you, did you have a desire, an emotional pocket, you wanted the reader to end up in having finished the novel?

RA: I wanted the reader to feel like she had been through the wringer. I wanted her to feel like she had to go through a difficult experience because that is how I felt writing it. But that’s just the metaphor that stands in for what it means to live. It’s a very heightened, artificial world that I’m writing about in this book. It’s uncomfortably close to our reality and also very far from our reality.

When you’re writing, you’re taking the reader by the hand and leading them. There’s a discharge of authority, I learned, weirdly, from reading to my kids. When you read a storybook aloud, when your kid is experiencing a story right before bed, they’re closing their eyes and just listening, and it’s like they’re listening to the voice of God. You just accept it. Given that most people in reality are illogical and weird, it makes sense to me that fiction would also move without always having a grasp of logic. There’s an internal system of logic, but like Bryan is writing a love story set in Houston that suddenly is set in Japan and you simply accept the logic of that particular gambit. It doesn’t interfere because that’s in a way what makes it realist. And that is, in a way, what makes my book realist: you don’t know what’s happening. And in your book, you don’t necessarily know what’s going to happen. And you don’t find out what’s going to happen. That is how the world works. Life rarely provides likable people, easily summarziable scenarios or a sense of closure. If your aspirations artistically are to replicate the feeling of life itself, well, you have to write in a place that’s kind of uncomfortable for the reader sometimes.

BW: Right. What was really important to me was not to be prescriptive at any point in the text. Life isn’t like that.

RA: I said this before on Twitter, and I just think it’s worth saying for the record, you are really good at writing about food. This book made me so hungry.

BW: Thank you! That’s like my Pulitzer, my Guggenheim. The language of food was deeply important to me in regards to each of the characters and the way in which food passed not only through their hands, but through their thoughts. The question was often, what is his culinary language? What dishes does he most identify with warmth, with happiness, with sadness, with wanting to make someone feel better, and how does that language change over the course of the text? What was really interesting to me was the question of what happened when those languages were in conflict with one another? And all of that’s in tandem with the country burning, so the question becomes, how do you exist? How are you a person who can exist in the midst of all of these things happening simultaneously? In Leave the World Behind, each of these characters, in their own way and for various reasons, is gravitating toward hope. Whether it’s for themselves, whether it’s for their partners, whether it’s for their children, hope seems to surface at different points. It felt like a constant movement forward in the midst of uncertainty.

RA: I share your sense that it is a loosely optimistic book or a resigned book. It’s acknowledging that whatever else is happening, there is still that imperative to make dinner, to have sex, to squeeze out some moment of pleasure because that’s all that can really be done. It’s just an acknowledgment to persist in this animal existence, to be hopeful. It concludes with the child and concludes with this sense that life will go on because life has always been this way. It’s always been uncertain. It’s always been unsettling. No matter how much you try to remember a meal, you can’t. You can’t hold on to it. It’s fleeting by its design in the same way sex is. It’s transcendent and in some ways that’s the whole point of being alive.

This interview has been edited and condensed for clarity and length.