Man Utd boss Solskjaer explodes at use of VAR despite... 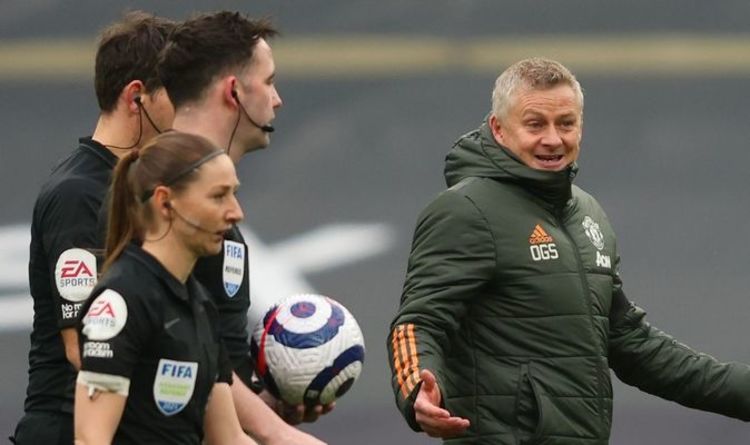 Ole Gunnar Solskjaer claims “the game is gone” after the latest chapter of VAR controversy. It perhaps tells the story that the United boss still found the time to criticise the technology, despite arguably his side’s best away performance in the Premier League this season.
United ran out 3-1 winners against Tottenham and could now be within 8 points of leaders Manchester City should they win their game in hand.

While Solskjaer is unlikely to be dreaming of a late push for the title, the position represents the clear progress United have made under his leadership.

But still, the Norwegian was aggrieved with the use of VAR after United’s classy opener was ruled out due to Scott McTominay’s foul on Son Heung-min.

“The game has gone. Game has absolutely gone,” he told Sky Sports.

JUST IN: Harry Kane ‘ready to tell Tottenham’ he wants to leave with two reasons behind decision

Thankfully, it didn’t matter for United despite going 1-0 down courtesy of a goal from man of the moment Son.

Goals from Fred, Edinson Cavani and Mason Greenwood saw United flip the game on its head in the second half to leave Spurs’ Champions League hopes hanging by a thread.

Solskjaer’s comments, in which he claimed Son conned the referee, did not sit well with Jose Mourinho who “told him what he thinks about the comments”.

Roy Keane was not impressed with Son’s antics and criticised the dramatic play-acting at half-time.

“It’s really bizarre, for a player like Son to roll around like that it’s embarrassing,” he said on Sky Sports.

“And it’s not just Son, to be fair Rashford done it about 10 minutes.

“Both players, rolling around screaming. The referee is under huge pressure, they’re doubting every decision they give now. Clearly, he’s obviously got this wrong.”